Robert Altman on the set of "A Prairie Home Companion." Photo by Virginia Madsen.

At RogerEbert.com, Virginia Madsen has written a lovely remembrance of playing the "angel of death" in "A Prairie Home Companion," the final film directed by Robert Altman, who died two years ago this month. An excerpt:

He never knew where or when the "angel" should appear to haunt or float. Sometimes he would just look at me for a long time. I always held his gaze and often wondered what he was thinking. these were always quiet moments, in the midst of all the fun and chaos of a working set. He would sometimes hold my hand and then let it go as he went on to direct. [...] 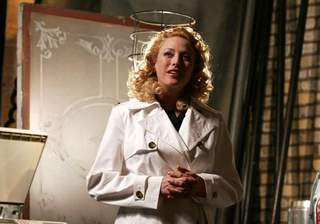 ... [He] always wanted me to move in such a deliberate way. There would be take after take sometimes, with Bob saying, "Do it again but this time even slower" Not an easy task for me because my physicality and that of all the other performers was so animated! He even briefly entertained the idea of having me pulled along on wheels so I would really appear to float. He also designed my big hair and white trench. Guess that was angelic to a man like him! Or film-noir angelic anyway. He gave me a copy of "The Long Goodbye."

Along with a few anecdotes, she offers her thoughts (and remembers Altman's) on the gorgeous photo above. Read the whole thing here.

A few of my own Altman memories, and an appreciation of Madsen's final moments in the film here . I think I know what I'm going to be revisiting tonight....