All trails lead to 'The Searchers' 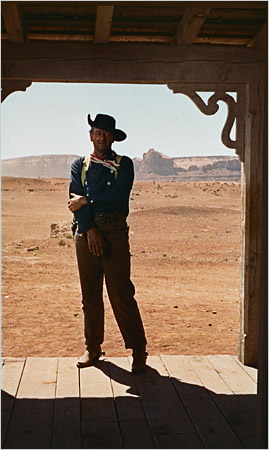 Ethan Edwards, John Wayne and the ghost of Harry Carey.

I had a favorite lit professor in college, Larry Frank, who said that all of literature could be seen through the looking glass of "Alice's Adventures in Wonderland." He made a persuasive case, from Shakespeare to Jane Austen and Emily Bronte. In a beautiful piece about John Ford's "The Searchers" in the Sunday New York Times, A.O. Scott makes similar connections to Ford's masterpiece, and particularly the opening and closing shots through the doorway looking out into Monument Valley (where John Wayne's Ethan Edwards is definitely one of the monuments, solid as a weather-chiseled rock formation but destined to wander forever between the winds -- perhaps because he's too large, too wild, and too peripatetic to be contained within the walls of civilization and family):

Ernest Hemingway once said that all of American literature could be traced back to one book, Mark Twain's "Huckleberry Finn," and something similar might be said of American cinema and "The Searchers." It has become one of those movies that you see, in part, through the movies that came after it and that show traces of its influence. "Apocalypse Now," "Punch-Drunk Love," "Kill Bill," "Brokeback Mountain": those were the titles that flickered in my consciousness in the final seconds of a recent screening in Cannes of Ford's masterwork, all because, at crucial moments, they seem to pay homage to that single, signature shot.

Scott is a "word guy" -- that is, he came to reviewing films from reviewing books. But he gets movies, unlike the abominable Clive James (proponent of the "movies are just the story" theory in last week's NYT Review of Books).

Scott's "visual literacy" is beautifully expressed in his appreciation of one of the greatest shots (or pairs of shots) in film history:

In the last shot of "The Searchers," the camera, from deep inside the cozy recesses of a frontier homestead, peers out though an open doorway into the bright sunshine. The contrast between the dim interior and the daylight outside creates a second frame within the wide expanse of the screen. Inside that smaller space, the desert glare highlights the shape and darkens the features of the man who lingers just beyond the threshold. Everyone else has come inside: the other surviving characters, who have endured grief, violence, the loss of kin and the agony of waiting, and also, implicitly, the audience, which has anxiously anticipated this homecoming. But the hero, whose ruthlessness and obstinacy have made it possible, is excluded, and our last glimpse of him emphasizes his solitude, his separateness, his alienation — from his friends and family, and also from us.

Even if you are watching "The Searchers" for the first time — perhaps on the beautiful new DVD that Warner Home Video has just released to mark the film's 50th anniversary — this final shot may look familiar. For one thing, it deliberately replicates the first image you see after the opening titles — a view of a nearly identical vista from a very similar perspective. Indeed, the frame-within-the-frame created by shooting through relative darkness into a sliver of intense natural light is a notable motif in this movie, and elsewhere in the work of its director, John Ford. Especially in his westerns, Ford loved to create bustling, busy interiors full of life and feeling, and he was equally fond of positioning human figures, alone or in small, vulnerable groups, against vast, obliterating landscapes. Shooting from the indoors out is his way of yoking together these two realms of experience — the domestic and the wild, the social and the natural — and also of acknowledging the almost metaphysical gap between them, the threshold that cannot be crossed.

But that image of John Wayne's shadow in the doorway — he plays the solitary hero, Ethan Edwards — does not just pick up on other such moments in "The Searchers." Perhaps because the shot is thematically rich as well as visually arresting — because it so perfectly unites showing and telling — it has become a touchstone, promiscuously quoted, consciously or not, by filmmakers whose debt to Ford might not be otherwise apparent.

It is certainly there, a ghostly presence alongside the memory of Jack Twist, in the final shot of "Brokeback Mountain." And the theme, of an obsession with vengeance that may or may not lead to redemption, runs not only through the other Clint Eastwood films mentions ("Unforgiven," "Mystic River"), but "Million Dollar Baby" (a search for a surrogate daughter), as well. (In that film, the Outsider protagonist is seen indistinctly through the haze of a steamy diner window -- he's on the inside, but he's almost disappeared.)
Advertisement

The real subject, though, is not how the West was conquered, but how — according to what codes, values and customs — it will be governed. The real battles are internal, and they turn on the character of the society being forged, in violence, by the settlers. Where, in this new society, will the frontier be drawn between vengeance and justice? Between loyalty to one's kind and the more abstract obligations of human decency? Between the rule of law and the law of the jungle? Between virtue and power? Between — to paraphrase one of Ford's best-known and most controversial formulations — truth and legend?

Ford's way of posing these questions seems more urgent — and more subtle — now than it may have at the time, precisely because his films are so overtly concerned with the kind of moral argument that is, or should be, at the center of American political discourse at a time of war and terrorism. He is concerned not as much with the conflict between good and evil as with contradictory notions of right, with the contradictory tensions that bedevil people who are, in the larger scheme, on the same side. When should we fight? How should we conduct ourselves when we must? [...]

The monomaniacal quest for vengeance, undertaken by a hero at odds with the society he is expected to protect: it's sometimes hard to think of a movie from the past 30 years, from "Taxi Driver" to "Batman Begins," that doesn't take up this theme. And the deeper question of where vengeance should stop, and how it can be distinguished from justice, surfaces in "Unforgiven" and "In the Bedroom," in "Mystic River" and "Munich."

In "Munich" the Mossad assassins spend most of the film in a limbo that Ethan Edwards would recognize, even though it takes place amid the man-made monuments of Europe rather than the wind-hewn rock formations of Monument Valley. The Israeli agents are far from home, exiled from the democratic, law-governed society in whose name they commit their acts of vengeance and pre-emption, and frighteningly close both to their enemies and to a state of pure, violent retaliatory anarchy. With more anguish, perhaps, than characters in a John Ford movie, they often find themselves arguing with one another, trying to overcome, or at least to rationalize, the contradictions of what they are doing. They appeal to various texts and traditions, but they might do better to pay attention to the television that is on in the background at one point in the movie: another frame within the frame, tuned, hardly by accident, to "The Man Who Shot Liberty Valance."