About this whole Netflix pricing thing...

I understand. That is to say, I understand Netflix's reasons for raising prices and offering DVD-only and streaming-only plans (they were losing money, they want to push customers to streaming which has lower delivery costs, etc.) and I understand the anger long-time subscribers feel at suddenly being faced with an up-to-60-percent price-hike (see Edward Copeland's "Dear Netflix: Drop Dead.") What concerns me most is that the Netflix Instant service still isn't up to snuff.

I'm not talking about the technology; the quality of the streaming has greatly improved (I watch via TiVo over my home Wi-Fi network on a 55-inch HD screen) and, technology being technology, will undoubtedly get better. I'm not even talking about the spotty selection, which I trust will also improve greatly as media conglomerates catch up with reality and figure out that this is a lucrative opportunity. The more serious problem is that too many of the movies themselves (even the good ones) are being made available in lousy prints: not just shabby public-domain versions (the equivalent of the old 16 mm local TV station prints that used to circulate through low-end nontheatrical distributors), but films shown in the wrong aspect ratio (beware of anything with the Starz logo on it) or even obsolete pan-and-scan (shame on you, Warner Bros.). What good is streaming delivery if you have to watch a digital mastering job that looks like it was done in 1986? I thought these battles were fought (and won) long ago, in the VHS and early DVD era. Surely the dominance of 16:9 HDTVs has accustomed mainstream movie and television watchers to the previously foreign concept of widescreen and "letterboxing." (Now some people actually distort their TV picture on purpose -- grotesquely stretching 4:3 images just so they'll fill up the whole screen horizontally. Oy!)

A recent anamorphic widescreen (2.35:1) movie like "Let Me In" shown in "full screen" (16:9)? Not acceptable. Albert Brooks' "Lost in America" (1.85:1) in 4:3? Outrage! (Actually, that particular movie doesn't look so bad, but why crop it? The Amazon $2.99 Instant Video 48-hour rental is in the right ratio.) And the mangled movies aren't even labeled, the way they would be if they were hacked up for television or DVD: "This film has been modified from its original version: it has been formatted to fit your screen." (Although, that too is bull: Parts of the picture have been cut off so that the smaller image gives the illusion of looking bigger. Properly presented letterboxed or windowboxed movies "fit your screen" just fine.) 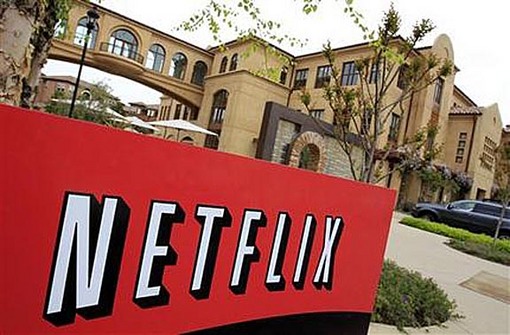 Netflix needs additional revenue to build up its streaming service. In the first three months of this year, Netflix spent $192 million on streaming rights after putting $406 million into the library last year. Licensing costs are expected to jump to $1.3 billion to $1.4 billion next year, Arash Amel, research director for digital media at IHS Screen Digest, told AP.

Well, they're going to have to improve that library fast -- not just adding more titles, but improving the quality of the sources.

No doubt streaming/downloading is a growth market. As I've said over and over again for years, it makes absolutely no sense to deliver digital information on cumbersome plastic discs that have to be shipped, carried and stored or returned. There's a good reason that iTunes became the world's biggest music retailer in 2009, and that Spotify (which has just reached the US) is second only to iTunes as a source of digital music revenue for recording labels in Europe. VHS debuted in 1977 (a year after Sony Betamax) and the last movie to ship in the format was David Cronenberg's "A History of Violence" in 2006. DVDs were introduced in the US in early 1997, only 14 years ago; I doubt Blu-ray will last as long.

But in the announcement of the new pricing plans, Netflix claimed it was still committed to DVDs and was "establishing a separate and distinct management team solely focused on DVDs by mail...":

Given the long life we think DVDs by mail will have, treating DVDs as a $2 add on to our unlimited streaming plan neither makes great financial sense nor satisfies people who just want DVDs. Creating an unlimited DVDs by mail plan (no streaming) at our lowest price ever, $7.99, does make sense and will ensure a long life for our DVDs by mail offering.

Meanwhile, TVs, DVD/Blu-ray players and gaming boxes are manufactured with the ability to play big-screen Internet video (using Netflix, Fandor, MUBI, Roku, Vudu, Hulu, etc.) built in. I enjoy renting movies from Amazon Instant Video because they're usually cheaper than Comcast On Demand and they actually download to my TiVo for the rental period, so I don't have to worry about any streaming hiccups, and can easily pause, rewind and slow down movies for a closer look if I want to. I've been thinking of checking out Greencine, because they seem to focus on cinephile titles that interest me more than multiplex releases from a few months ago. (Their homepage lists "Inside Job," "Winter's Bone," "In the Loop," "Dogtooth" and "The Man From Nowhere" among their ten "hottest titles" in April-May of this year.)

So, my feeling is: Netflix, do what you have to do, but if your subscribers don't see big improvements (say, 60 percent improvement?) in what you're offering, we may decide to go elsewhere. It's not like we don't have plenty of other options.

ADDENDUM: This is not a good sign: Netflix "Tech" Blog post, Friday, June 17, 2011 -- a month before the new pricing plans were announced: "Upcoming Changes to the Open API Program":

We're making some changes to the Open API program to support the Netflix focus on international streaming. Later this year, we will discontinue support for DVD-related features, degrading them through redirects or other means gracefully whenever possible. These changes will only affect the Open APIs, so your DVDs will continue to ship!

In other words, if you use, say, an iPhone app, or a site other than Netflix.com, to add movies to your DVD rental queue, that functionality will soon be disabled by Netflix.You will only be able to add titles available on Netflix Instant, unless you use a teeny mobile web browser. This does not sound to me like something that "will ensure a long life for our DVDs by mail offering."

This single-minded focus on streaming is becoming frustrating. Don't get me wrong, I like streaming and it's definitely the future, but let's be real, your DVD and Bluray catalog absolutely embarasses the streaming catalog. And for better or worse, Blockbuster is dead, so I don't even have another good option for DVDs and Blurays. Not to mention that you're dragging WAY behind on subtitles for streaming, something that isn't a problem with DVDs.

I wouldn't have needed to BUY and app to manage my DVD queue from my iPhone if your site was workable on that device. Even your native iPhone app doesn't offer DVD Queue management.

I rarely get movie recommendations when I'm home using my computer. I get them when I'm out at lunch with friends and co-workers. Currently I use iPhlix to add those to my queue which is quick and convenient and for a seemingly random reason you want to make it much more convenient for me to get my DVD's from RedBox.

HERE'S A THEORY: In an interview with CNET, Eric Garland of the online media measurement firm BigChampagne says Netflix is making a deliberate move to kill DVDs the way Apple killed the 3.5-inch floppy disc, and to force studios to open more of their libraries to instant digital delivery:

This dissatisfaction is going to provide Netflix with tremendous leverage in their content licensing going forward. The question for Hollywood will be do you or don't you want to sell premium entertainment to the largest and most active subscribed base of young film and TV customers in the country.

(Above: AP photo by Paul Sakuma)