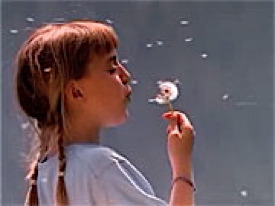 Without greenhouse gasses, cute little girls and weeds would be impossible.

I am a big fan of absurdist advertising campaigns. My all-time favorite is still Monsanto's astonishingly brilliant '60s slogan: "Without chemicals, life itself would be impossible." The delicious disingenuousness of that tag line still makes me well-up with laughter and delight, even when I am chemically depressed. I treasure its Pythonesque logic: Chemicals support life. Monstanto manufactures chemical products. Therefore, Monsanto supports life! (My second-favorite is the possibly apocryphal story of the launch of Pepsi's "Come Alive!" campaign in Taiwan, which was supposedly translated into a distasteful and not-at-all easy-to-swallow: "Pepsi raises your ancestors from the dead.") Now the concerned folks at the Competitive Enterprise Institute have come up with an ad to counter Al Gore's global warming documentary, "An Inconvenient Truth" (recently unveiled at the Cannes Film Festival) -- and it's bold and hilarious enough to rival Monsanto's.

Go here. Select "Energy" (with the little girl blowing on the dandelion seed head -- kind of reminds me of the infamous Lyndon Johnson ad with the little girl, the daisy and the mushroom cloud), and prepare yourself for a gaseous treat. (It's also on YouTube.)

The slogan: "Carbon dioxide: They call it pollution. We call it life." The gist: Carbon dioxide: You can't see it. We exhale it. We need it to live. "It comes from animal life, the oceans, the Earth, and the fuels we find in it." Therefore, it's not a greenhouse gas -- it's part of life! Now, get over it!

Wow. That's so good I can't even think about it without breaking into a huge smile. In that sense, I guess it's more like nitrous oxide than carbon dioxide. Every line, every image, is perfect, and perfectly vacuous. Indeed, this may be the funniest one minute I've ever seen -- up there with the best ad parodies on "Mr. Show" and "SNL." Only it's not a parody. Or it doesn't know it's a parody.

("The Earth, and the fuels we find in it." What a phrase! That ol' Intelligent Designer Mother Earth went and hid those "fuels" in her belly as an Easter egg hunt for us humans... millions of years before we even existed. She knew we'd be making internal combustion engines one of these days and would need to find, and refine, some fossil fuels in order to free us from back-breaking labor, light up our urban centers and transport our loved ones in SUVs. We're a whole species of Jed Clampetts, with our fortunate fuel-findin' luck! Well doggies!)

Thank you, CEI. Thank you for more outrageous laughs in sixty seconds than in all the films of Adam Sandler and every episode of 'Friends' combined.

Think about the possibilities: Air is roughly 78 percent nitrogen and the rest is mostly oxygen, with a few other gasses, like our beloved, life-giving carbon dioxide. But we know that oxygen is essential to life, so let's have more of that, too! Carbon dioxide is great, but maybe it can be improved -- life-enhanced, if you will. It already has two oxygen atoms -- let's just knock off the carbon one (chemically), add another oxygen (chemically), and get rid of all that nitrogen (chemically)! Then we can all breathe ozone! Oh, wait, that's toxic to life on Earth. And a significant form of air pollution. But it's just made up of harmless little oxygen atoms that you can't even see, so I call it life. (BTW, I hear nitrogen is colorless, odorless, tasteless -- so, how bad can that be? I think I'll put a little more of it into my bloodstream -- like fertilizer. Oops! Nitrogen bubbles in the bloodstream is called "the bends," and scuba divers sometimes die from it. But I call it life!)

And, you know, when you're the Competitive Enterprise Institute (not to be confused with the Bush administration's pet org, the American Enterprise Institute), this is the right and proper attitude for you to have. It's all about the competition. For air. And the air rightfully belongs to... whoever can make money with it. The Human Drama of Atmospheric Competition!

P.S. A link above reminds me of some other Great Moments in Global Competition (although I can't vouch for the authenticity of all of them):

The Chevy Nova did not sell well in Mexico because "no va" translates as "no go."

The Ford Pinto was not desired in Brazil, because "pinto" was slang for "tiny penis."

The Coors slogan "Turn it loose" came out in Spanish as (loosely) "Get diarrhea."

Kentucky Fried Chicken's "Finger-Lickin' Good" was translated into Chinese as "Eat Your Fingers Off."

A phoenetic translation of the product name "Coca-Cola" in China was initially written in characters that meant "bite the wax tadpole" or "female horse stuffed with wax" -- depending on the regional dialect, of course.

Letter: In defense of (some) Christians

Letter: Intelligence and religion are not incompatible