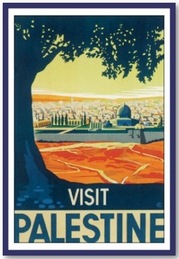 I'm writing this the day after first posting this entry. I now regret it. The point I make about artists is perfectly valid but I realize I wasn't prepared with enough facts about the events leading up to the Festival's decision to showcase Tel Aviv in the City-to-City section. I thought of it as an innocent goodwill gesture, but now realize it was part of a deliberate plan to "re-brand" Israel in Toronto, as a pilot for a larger such program. The Festival should never have agreed to be used like this. It was naive for the plan's supporters to believe it would have the effect they hoped for. The original entry remains below. The first 50 or so comments were posted before these regrets.

The tumult continues here about the decision to spotlight Tel Aviv in the City-to-City sidebar program of the Toronto Film Festival. The protesters say the festival is thereby recognizing the "apartheid regime" of Israel. The controversy shows no sign of abating, and indeed on Tuesday it was still big news in the Toronto newspapers, with the Star's front page featuring lineups of those opposing the TIFF decision (including Harry Belafonte, Jane Fonda, Viggo Mortensen, Julie Christie and Danny Glover) and those supporting it (including Jerry Seinfeld, David Cronenberg, Sacha Baron Cohen, Lenny Kravitz, Lisa Kudrow and Natalie Portman).

The protest is misguided and destructive. For what it's worth, I believe the Palestinians deserve a homeland, and that Israel's treatment of them has not been worthy of a nation that was itself founded as a homeland. But the artists of a nation cannot be fairly held responsible for the politics of that nation. All "sister cities" programs have a similar objective, to increase person-to-person contact with people from different lands. The City-to-City program, featuring filmmakers based in Tel Aviv, doesn't link Canada and Israel, but simply spotlights recent work from a center of much recent cinematic achievement.

True artists are without a country. They speak for themselves. They often act as the voice of conscience in their nations. Consider Solzhenitsyn in Russia, Nadine Gordimer in South Africa, Andrzej Wajda in Poland, the Czech New Wave, the Fifth Generation of Chinese filmmakers, the independent Iranian directors. They open discussion, broaden minds, exert a persistent pressure for change. When you disagree with a nation's policies, they are the last people you want to punish.

I've seen a great many films in the last few years by directors both Israeli and Palestinian. Some of them dealt directly with issues of terrorism. I can't think of a single one that wasn't concerned primarily with the people in their stories. Not one that was virulently anti-Israeli or anti-Palestinian. Perhaps I missed such films. The impression I've gained is that ordinary people on both sides can live with one another, trade with one another, and love one another. These films argue for the middle, not the extremes. When they've dealt with terrorism, they've deplored it. The films seek to encourage a dialogue.

I give you the wonderful film "The Band's Visit," a 2007 film by the Israeli director Eran Kolirin. I saw it here at Toronto. It involves the Alexandria (Egypt) Ceremonial Police Orchestra, which has been invited to perform a concert at an Arab Cultural Center, but takes the wrong bus and finds itself stranded overnight in a small Israeli desert town. Here the baffled locals do their best to accommodate them, and there is a touching late-night conversation between the band leader and a local woman who runs a cafe. They realize that at another time, in another place, they might have been soul mates. They never say this to each other, which is sort of perfect. 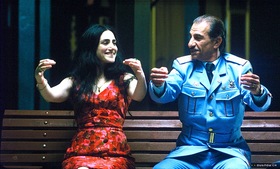 The cafe owner and the band leader in "The Band's Visit" What's wrong with this picture?

This single film arguably did more to improve the situation than the entire protest. Ironically, it was disqualified for Academy nomination in the Best Foreign Language category, because more than half the dialogue is in English -- the only language the characters have in common. The woman was played by Ronit Elkabetz, who at the Israeli Film Academy Awards Ceremony told Kolirin, "You reminded us of a thing or two that we have already managed to forget. You showed us what would happen if we would stand before each other, Jews and Arabs and look each other in the eye."

Did the TIFF protesters spend very much time studying the films and directors they wanted to punish? I doubt it. These were their targets:

"Bena," by Niv Klainer, about a man trying to care for his schizophrenic son; "Big Dig," by the Nazi concentration camp survivor Ephraim Kishon, a Tati-style comedy about a madman with a jackhammer who distracts the city; "Big Eyes" (1974) by the Israeli film pioneer Uri Zohar, about a womanizing basketball coach; "The Bubble," by Eytan Fox, involving a troubled homosexual love affair between an Israeli and an Arab; ; "A History of Israeli Cinema," Parts 1 and 2," by Raphaël Nadjari; "Jaffa," by Keren Yedaya, a Romeo and Juliet story involving young Israeli-Arab couple who have known each other since childhood; "Kirot," by Danny Lerner, a suspense film involving two Tel Aviv women, one Ukranian, one Israeli; "Life According to Agfa," by Assi Dayan, a cross-section of people meeting in a raffish bar; and "Phobidilia," by Yoav and Doron Paz, about a young man who fears to ever leave his home.

Try putting the shoe on the other foot. What if, this time next year, TIFF's City-to-City program featured new films from Los Angeles? And these films starred or were directed by Harry Belafonte, Jane Fonda, Viggo Mortensen, Julie Christie and Danny Glover?

Surely there would be protests against this decision. Consider the U.S. record of militarism. Our economic mistreatment of smaller economies. Our deplorable record on environmental pollution. Our many states with death penalties -- one of them, Texas, executing more people than the rest of the free world combined. Since Belafonte, Fonda, Mortenson, Christie and Klein live in America, surely they are culpable? And surely they should be blamed? And since the U.S. is the most active supporter of Israel in the world, surely they would protest against themselves?

Of course not. They would expect to be judged as individuals, as artists, not simply as Americans. Their protest at TIFF is opportunistic, knee-jerk and careless. It allows its participants, themselves artists, to grandstand at a cost to other artists.

[ Note 9/16: I have replaced my use of the word boycott in an earlier version of this entry. I urge you to scan the useful debate in the comments below. RE ]

Trailer for "The Bubble" (English subtitles)

Trailer for "Phobidilia," with English subtitles

Trailer for "Life According to Agfa" (Hebrew, but mostly a song performance, with a pan across the regulars in the bar)

Trailer for "The Band's Visit" (Mostly in English)