The serious man is consoled by the friend who has stolen his wife.

There is something about the Jewish way of humor and storytelling I've always found enormously appealing. I memorized material by Henny Youngman and Myron Cohen at an age when, to the best of my knowledge, I had never met a Jew. I liked the rhythm, the contradiction, the use of paradox, the anticlimax, the way word order would be adjusted to back up into a punch line. There seemed to be deep convictions about human nature hidden in gags and one-liners; a sort of rueful shrug. And the stories weren't so much about where they ended as how they got there.

The Coen brothers' new film, "A Serious Man," tells a Jewish story. It is largely about misery and bad luck, and it's very funny. Its hero's first two words must have been oy vey. The Coens, who have a way of following their vision with unwavering consistency, do not flinch from the problems of poor Larry Gopnik (Michael Stuhlbarg), which include a wife, son and daughter who cause him misery, a deeply flawed brother-in-law who has taken up residence on the sofa, three rabbis who are no help, and an exhibitionist neighbor who goes heavy on the eye liner and smokes during sex. If you aren't Jewish when you go into this movie, you may be when you come out.

I want to briefly discuss several films I've seen at Toronto his year, so this isn't the time for a full-dress review. But let me praise the brothers, Ethan and Joel, for making no attempt to "mainstream" the story in a misguided attempt to appeal to the goyim. Being specific makes their movie more accessible, not less, because there's some Larry Gopnik in all of us.

One of the big festival hits at this point is Lee Daniels' "Precious: Based on the Novel Push by Sapphire" The story of an abused and overweight black girl, given new hope (but after much trauma) by an inspirational teacher and a determined social worker. There's a story about the film's lively press conference over on my home page. 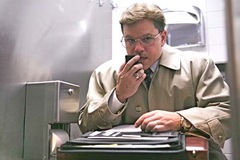 The informant taping in the toilet

Steven Soderbergh's "The Informant!" is about a true story you may vaguely recall, about the highest-ranking corporate whistle-blower in U.S. history. That was Mark Whitacre, who in 1995 exposed a price-fixing fraud by Archer-Daniels-Midland in Decatur, Illinois, one of the 50 largest corporations in America. So global are its operations that a great deal of the tofu in Japan comes from Illinois soybeans. Matt Damon plays Whitacre, a man described as "an American hero" by FBI agents who worked with him, which doesn't entirely explain how he ended up with a prison sentence three times as long as the executives he fingered.

Soderbergh hasn't made quite the movie you might be imagining. This isn't a corporate thriller so much as a sly comedy fascinated by the complexities of Mark Whitacre himself. The film is fascinating in the way it reveals two levels of events, not always visible to one another or to the audience. A second viewing would be rewarding, knowing what we find out. Matt Damon's performance is deceptively bland as the character grows quietly more bizarre. He comes from a world of true-blue Downstate people, without affectations, surrounded by some of the richest farmland in the world. Whitacre's determination to wear the FBI's wire leads to situations where discovery seems inevitable, but he's seemingly so feckless that suspicion seems misplaced. What he's up to, is in some ways, so very simple. Even if it has the FBI guys banging their heads against the wall. 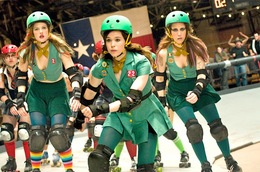 Ellen Page, who conquered the 2007 festival with "Juno," is here with "Whip It," Drew Barrymore's directorial debut. Page plays a small-town Texas girl who escapes from what she sees as a backwater by sneaking away to Austin to become a Roller Derby star. Yes. She's still in high school, and she keeps this a secret from her parents all season long.

The film confirms what's been clear to me since "Hard Candy" (2005) and probably to others for much longer: Page is not only a great actress, but a daring one. Barrymore begins with a story whose broad outlines are potentially conventional and uses quirky personal details to bring it to life. Among her other achievements, she makes it clear exactly what the rules and strategies of Roller Derby are, and now that I understand them, I find they're so simple I must have been trying too hard. The movie has a lot of convincing-looking action involving Derby stars with stage names like Dinah Might (Juliette Lewis), Malice in Wonderland (Kristen Wiig) and Smashley Simpson (Barrymore herself, who apparently doesn't ask her actors to do anything she won't do).

It's fairly routine at a film festival to hear a director praise somebody else's film. But Lone Scherfig, the Danish director of the wonderful "An Education," went a little further than that. Of Michael Haneke's "The White Ribbon" she told me, "I think it may be the best film I have ever seen." The film, which won the Palme d'Or at Cannes 2009, couldn't be more different than Haneke's much-admired "Caché" (2005), about a family disrupted by the arrival of videotapes indicating someone has inexplicable access to their lives. Yet in a way it's similar.

Set in Germany on the eve of World War One, it involves a small rural community torn apart by a series of horrible crimes. Who is committing them, and why? Haneke is too original a director to make anything as simple as a whodunit. His film is not about the identity of the killer but about the nature of the community. Where does suspicion fall, and why, and what does that imply -- about society in general, and Germany at that time in particular? In a buried sense, the real subject of the film may be the rise of the Third Reich. No, suspicion doesn't fall on local Jews. The film is more about the nature of guilt and suspicion itself.

Diablo Cody, the now-celebrated ex-stripper who wrote "Juno," is here at Toronto with "Jennifer's Body," starring Megan Fox, who of course has inspired paparazzi fever at the festival. It's sort of a "Twilight" for boys, with Fox in the Robert Pattinson role, except that Pattinson was shirtless and to the dismay of her fans Fox is not. Cody's character Juno has undergone is a 180-degree reversal, with the heroine now transformed into a fiend who eats the flesh of teenage boys. Can you imagine Juno's poor boyfriend, Michael Cera, covered with steak sauce?

Fox did her career a lot of good with the two "Transformers" movies, but this is her first chance to really act, and you know what? She comes through. She has your obligatory projectile vomiting scene and somehow survives it, she plays the role straight, and she looks convincing in a blood-drenched dress with her hair all straggly (below). 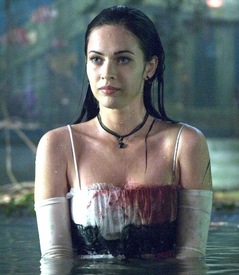 The film is directed by Karen Kusama, who in the splendid "Girlfight" (2000) introduced Michelle Rodriguez. She handles this material efficiently and with a certain relish. It's not art, it's not "Juno," it's not "Girlfight" for that matter, but as a movie about a flesh-eating cheerleader, it's better than it has to be.

When I wrote about George Clooney in "Up in the Air" the other day, I mentioned how comfortable he is with intelligent, complex dialogue. I received comments on that blog entry from readers who like the George Clooney they find in challenging films a lot more than the films where he plays more conventional leads.

The other Toronto entry Clooney has this year is Grant Heslov's "The Men Who Stare at Goats," a comedy about a secret Special Forces unit devoted to waging psychic warfare. The title comes from the theoretical ability of these warriors to kill a goat by simply staring in its eyes. The movie has a nice absurdist humor, and another Clooney performance that indicates he's a compleat actor. He's a Jedi Warrior (that's an Army unit, not a "Star Wars" fan) who takes the notion paranormal warfare very seriously. I think.

The trailer for Soderbergh's "The Informant!"

Ellen Page in "Whip It"

Trailer for "The Men Who Stare at Goats"