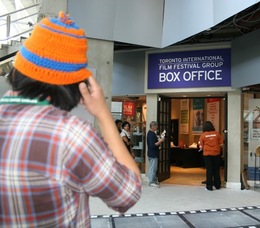 Alex Vo, editor of Rotten Tomatoes: No Meter when he needs it most.

I have a quirky policy about writing of films from a film festival. In the early years, I tried to avoid an actual "review," especially negative, because I believed a film deserved a chance to open before I laid into it. This was grandiose--as if the world was awaiting my opinion. Then I began suggesting my thinking, without going into detail. Then, being human, I allowed that approach to enlarge into specific descriptions of films I really loved, or hated.

That's now the strategy I use, with amendments. I can only review a film for the first time once, and if I've used all my energy in rehearsal, what have I saved for opening night? I'll reflect the general reception of certain films, however, if only in the spirit of providing news coverage. The first year I was here, I was one of four members of the American press. These days, with half the audience members filing daily blogs and twittering immediately after a film is over, it's simply all part of the festival process.

So that brings me around to my latest approach. Yes, I will write about specific films when my response is particularly strong (after the world premiere of "Juno," for example). Yes, I will write about festival scandals and controversy. But when anyone with a computer can read dozens of instant reviews of many entries for readers who haven't yet seen the films, I enjoy writing also about the experience--the people, the screenings, the legends, the anecdotes, the rituals, the whole unreal world of a time and place that consists only of seeing films and discussing them, and somebody thinks every single film is worth seeing. That's particularly true at Toronto, where a seasoned and expert group of programmers take personal responsibility for every section, and introduce most of the films themselves.

That said, there are several films here that I saw at Cannes in May. As I write this on Wednesday night, I haven't attended my first Toronto screening this year. That will be the press screening of "Creation," the Charles Darwin bio, which opens the festival in the vast Roy Thomson Hall on Thursday night. Until then, I thought I'd reprise some of my opinions from Cannes.

"Wild Grass" (Les Herbes Folles) is by Alain Resnais, whose "Last Year at Marienbad" (1961) was one of the founding films of the New Wave. Now 86, looking fit and youthful on the red carpet, he has made one of those films perhaps only conceivable in old age. It is about an unlikely and fateful chain of events that to a young person might seem like coincidence, but to an old one illustrates the likelihood that most of what happens in our lives comes about by sheer accident. To realize this is to become more philosophical; the best-laid plans of mice and men are irrelevant to the cosmos.

To explain how this could all possibly happens would be not wild (folles) but a folly (une folie). Here is how it begins: The heroine Josepha (Sabine Azéma) decides one day to buy a pair of shoes. That leads to her purse being snatched. That leads to Georges (Andre Dussollier) finding her wallet. That leads to everything else. Resnais uses an omniscient narrator, as he must, because only from an all-knowing point of view can the labyrinth of connections be seen. He films in a colorful, leisurely style; not taking even the most serious things too very seriously, because, after all, they need never have happened. 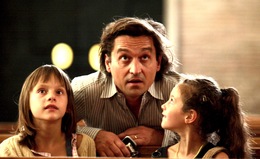 "The Father of My Children"

"The Father of My Children" (Le pere des mes enfants) belongs to the genre of the country house movie, French division. British country house movies are a mix of Jane Austen, Agatha Christie and Evelyn Waugh, with Wodehouse as the mixologist. French country house movies tend to tell bourgeois family stories, including children of all ages, and they tilt toward the pastoral. This film, the third by Mia Hansen-Løve, only 28 and a rising star of French cinema, stars Louis-Do de Lencquesaing as a movie producer who is willing to take chances on serious auteurs and is currently deep in debt, not least because of his backing of a temperamental perfectionist not a million miles separated from Lars von Trier. The story is said to be inspired by the real-life producer Humbert Balsan, who took in the thankless task of von Trier's "Manderlay" (2005)

The producer is a nice man. Too nice. Too loving, too loyal, too driven. We begin by following him through desperate attempts to keep his company afloat, and then watch as his wife (Chiara Caselli) and children try to deal with the impossibilities he has created. Some of this happens in Paris, much of it happens in his country house, and the focus is not on film production but on family. I was reminded of two other recent French films: the current "Summer Hours," about an old lady leaving a legacy for her family to deal with, and last year's "A Christmas Tale," with Catherine Deneuve in an affecting performance as a mother less worried about her death than her children are. 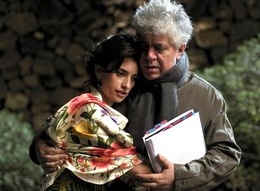 "Broken Embraces" (Los Abrazos Rotos) is the much-awaited new Pedro Almodóvar collaboration with his recent muse, Penelope Cruz. It's about an old man remembering a woman he loved. Lluis Homar ("Bad Education") plays a director who went blind in an auto accident that killed his love (Cruz), who was his secretary, and who he met as a call girl. Now he works as a successful screenwriter, using touch-typing. One day he's approached by an ambitious young filmmaker named Ray X (Ruben Ochandiano), who he suspects is the son of the evil millionaire he holds responsible for the woman's death.

As always with Almodóvar, it isn't nearly as simple as that. Using interlocking flashbacks, the film reconstructs what actually happened in a combination of overwrought Sirkian melodrama and Hitchcock. The music, indeed, pays homage to Bernard Hermann's work, particularly his score for Hitchcock's "Vertigo," and the film's romantic entanglements pay homage to Almodóvar's own pansexual stories. Cruz is a life force, but Homar's work is the film's engine.

"The Time That Remains," is one of the more unexpected successes at Cannes, is a deadpan Palestinian comedy written by, directed, and starring Elia Suleiman. Read that again: a deadpan Palestinian comedy. And not especially political, although almost all stories set in Israel must be political to one degree or another. The film, dedicated to the memory of Suleiman's parents, shows his father as a firebrand gun-maker, gradually aging into an old guy who sits outside a cafe with his pals, smokes, smokes, smokes, and drinks coffee as if he has kidneys of steel. 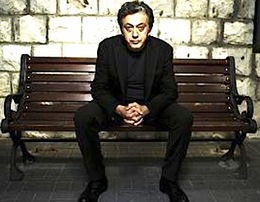 Elia Suleiman in his own "The Time that Remains"

This family lives in a small but pleasant flat with a nice view of Nazareth; they're part of a friendly community. The film consists of fairly self-contained vignettes of human nature, reminding me curiously of the Czech New Wave comedies. The character played by Suleiman, satire linked with autobiography, a solemn, silent figure with dark shadows under his eyes, is poker-faced and never speaks. He simply stands and regards all that happens for 60 years. I don't know what that makes it sound like to you. I was surprised by how it grew on me. The karaoke scene is unreasonably funny.

"Enter the Void," by Gasper Noe of France is a nearly unendurable in-depth investigation of a very shallow idea. The camera positions itself close behind the head of a callow youth, jug-eared and crew-cut, as he films with his video camera and then becomes the camera as the remainder of the film is seen from his POV. The hero, an orphaned American, lives with his sister in Tokyo, where she is a nude dancer and possibly a booker, and he is a druggie and possibly a dealer. If they don't practice incest, you could have fooled me.

After he dies in a shooting at a nightclub named the Void, we live through subjective scenes intended as what he sees after death. They involve flashbacks, replays of what has already happened, and hovering above what's happening now. In Noe's view, the soul does survive the body, which for much of this time has been cremated. These scenes are spaced out with sound and light abstractions resembling 1960s underground films past their shelf life. If Noe's camera plunges into a vortex once, it does so a hundred times: Into white holes, black holes, psychedelic kaleidoscopic holes, over and over and over again, representing the delightful diversity of the Void. The visuals might have been juicier if he had known abut fractals. The film includes obligatory genitals of both genders, and one of the voids the POV plunges into is the mess in a stainless steel pan after an abortion. 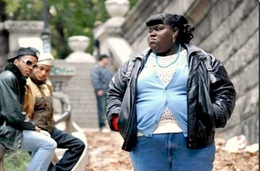 "Precious: Based on the Novel Push by Sapphire," one of the best films of the autumn, is Lee Daniels' the story of a physically and mentally abused poor black girl from the ghetto, who summons the inner strength to fight back for her future. It contains two great performances, by Gabourey Sidibe, in the title role, and Mo'Nique as her pathetic mother. Sidibe is the life force personified. Mo'Nique has a closing monologue that reduced some of us to tears. "Precious" will open nationally in less than six weeks, and I will write about it much more when it does. I think it's a plausible winner of the Audience Award--which is sort of like the grand prize at a festival without any juries or any prizes.

Trailer for "The Time That Remains (French subtitles)