The world according to Saint Tilda 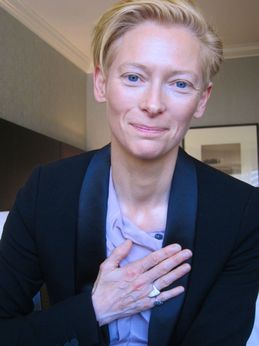 If more people were like Tilda Swinton, what a better world this would be. She looks people straight in the eye. She levels. She notices and cares about them--not just the big shots, but everyone. She still corresponds with Hilde Back, the 83-year-old Swedish woman who was the heroine of the great documentary "A Small Act" at Ebertfest 2011. She personally helps haul a trailer across the north of Scotland so that movies can be exhibited in towns without cinemas. She is formidably intelligent and forthright. She has a good heart. She freshens my faith in the cinema.

She makes movies she believes in. She says they always begin with a conversation with a director. She makes films, not projects. She has joined her considerable prestige to the work of many independent directors, and is also at home in high-profile work like Tony Gilroy's "Michael Clayton," for which she won an Academy Award in 2008.

She is here at Toronto this year with Lynne Ramsay's "We Need to Talk About Kevin," a fiercely challenging film in which she plays a mother with a son she never wanted--a son who fully realizes that, and uses great intelligence to make her life hell. At every point in the film, which moves around freely in her life, we are challenged to read this woman: What is she thinking? What is she suppressing? What is she capable of?

Two days after I saw the film, I sat down with Tilda and we discussed it. For anyone who has been subjected to endless sound bites in assembly-line hotel room interviews, just to listen to her speak is a great pleasure. Her mind is at work. Her blue eyes are alive. Her face mirrors emotion. She gives herself to challenging roles, and makes great movies possible.

Q. There are many ways to describe what happens in "We Need to Talk About Kevin," and not all of them agree. I want to put you on the spot. How would you describe the events in the film?

Q. Is Kevin simply a bad child? Or would he have been a different child with another mother?

Q. There have been several well-known cases in the UK of children who committed murder. They raise fundamental questions about responsibility.

Q. You have always made your talent available to independent directors outside the mainstream. This has produced many films much better than the mainstream is usually capable of creating.

Q. I once heard John Wayne say, "What would John Wayne do in a situation like this?" I don't believe that is a question that Tilda Swinton could ask. There is no typical Tilda Swinton character. You seem willing to become almost anybody.