The effect of effects

I've just been watching "The Thief of Bagdad" (1940), which has probably the most influential special effects of all pre-CGI films. It's going into the Great Movies Collection, not for the effects, of course, but because it is a sublime entertainment on a level with "The Wizard of Oz" or the first "Star Wars." But there are few effects in "Star Wars" (1977) that were not invented for, experimented with, or perfected in "The Thief of Bagdad." And some of them had their genesis in Raoul Walsh's magnificent 1924 silent film of the same name starring Douglas Fairbanks, Sr. 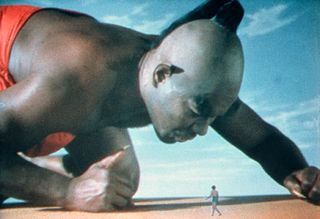 Left, Rex Ingram, as the genie, towers over Sabu, as the thief, in "The Thief of Bagdad." The shot was made by combining real footage of Ingram, close to the camera, and Sabu, several hundred feet away.

Details will await my Great Movies article. But in a more general way, I'd like to discuss the impact of the 1940 film, produced by the legendary Alexander Korda and directed by three names in the credits (including Michael Powell) and perhaps three more who were not credited. Just from that you can see it was a producer's picture.

The thing about the film is, we logically know the effects are effects, but they have aspects of startling reality. We know that horses can't gallop through the air, and carpets can't fly. But, hey, that's the real Sultan on a real horse, and that's the real Sabu on a real carpet. Today it might be done with CGI. We would get quick cuts of the horse heaving and tossing its mane, and the Sultan clinging for dear life, and eagles circling, and the overhead shot to the ground below, and the movie would be so busy it would forget the real point of the shot: The horse is flying!

That's what happens when a shot is about effects, instead of about what they portray. One of the pleasures for me of the latest X-File movie is that it always remembered that. We knew we weren't always looking at real bodies or real severed heads, but they had heft and presence. The filmmakers went to the trouble of model-making instead of slapping in some CGI. Nor did they dwell on their work; the shots were only held long enough to make their point.

"The Thief of Bagdad" shows vast towering cities. They have astonishing beauty in awesome vistas. Yes, they're created with effects. But the effects sit there and can be regarded. It is much the same, really, with early animated films like "Snow White." The point was so look at something extraordinary, not whiz through it.

I have nothing against digital technology. It tricks the eye just as matte paintings and miniatures did. What I'm concerned about is that filmmakers take it for granted. When you're not dealing with something physical, like a matte, you're tempted to go for broke, and then your "real life" movie feels like a cartoon. The best effects are those that are entirely story-driven and character-driven. Consider the climactic battle in "Iron Man." One reader wrote me in wonder that he found himself really engaged with the two battling iron creatures, even when he knew they weren't real. That should always be the ideal. The genius of "Spider-Man 2" was that the effects always followed, rather than produced, the need for them. The modern film that best uses effects, I think, is "Dark City," which regards them with respect.

Classical animation had limitations. The artists were using some of the same techniques as live-action effects, such as paintings on glass with see-through areas, to create backgrounds and foregrounds, or the ability to move through planes of space. Because every frame was drawn by hand, every frame was treated with respect; there was time to contemplate. Much modern animation has attention-deficit disorder. It blasts us with high-velocity images we don't have time to care about. "Finding Nemo" was a film that had the patience to be visually beautiful. Fish don't swim like dueling motorboats.

CGI introduces the same problem to live-action films. Didn't we enjoy the actual stunt work of Jackie Chan more than the present-day impossibilities in karate fights? Stunts are threatened by CGI. Actors like Fairbanks Sr. and Buster Keaton did their own stunts--they were great athletes as well as great actors. When Fairbanks Senior leaps from one big pot to another in a chase in the 1924 film, how does he do it? He does it himself, with concealed trampolines. When a building wall falls on Keaton but he is saved because he happens to be standing just where the window is, how was that done? With a real wall, a real window, and the real Buster Keaton, who trusted his life to calculations that he was standing in exactly the right place.

I'm suggesting that we need to rein in promiscuous CGI. We need more attention to effect, less trust in effects. We don't need to hammer the audience with visuals that are too quick and facile to care about. Have a look at the 1940 "Thief of Bagdad." Then go back and see the 1924 film, which Fairbanks Junior told me was his father's best and favorite. Do you feel anything lacking in the special effects? I never do. The filmmakers are working with their hands and their imaginations, not with their computers.