Smash his camera, but not immediately 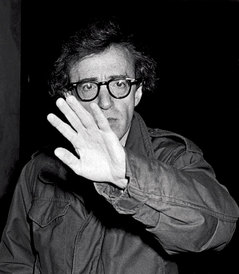 He is a viper, a parasite, a stalker, a vermin. He is also, I have decided, a national treasure. Ron Galella, the best known of all paparazzi, lost a lawsuit to Jackie Kennedy Onassis and five teeth to Marlon Brando, but he also captured many of the iconic photographs of his era. At 77, he is still active, making the drive from his New Jersey home and his pet bunny rabbits through the Lincoln Tunnel to Manhattan, the prime grazing land of his prey.

I had an idea, as many of us do, about Gallela and the species of paparazzi. It was a hypocritical idea. I disapproved of him and enjoyed his work. Yes, he comes close to violating the rights of public people, and sometimes crosses the line. He certainly crossed the line with Jackie's children.

But he sold his photographs to publications which we bought, we looked at them with enjoyment and curiosity, and his career was made possible by our human nature. These are conclusions I've arrived at after seeing Leon Gast's "Smash His Camera," a new documentary shown here at Sundance. It shows Gallela triumphant, installed with his devoted Betty in his Jersey mini-mansion with a large Italian garden for the bunnies. A friend says, "You look at his house, and you think--Sopranos!"

In his basement archives are the prints and negatives of more than three million of his photographs. He has published coffee table books filled with them. He's had several gallery shows. Collectors pay premium prices for signed prints of his work. He is the go-to man if you want shots of Sinatra, Michael Jackson, Capote, Liz and Dick, Nicholson, Mick Jagger, Elvis. You know that shot of the startled Duke of Windsor in the back of a limo, and the shapely legs of the Duchess? Gallela. 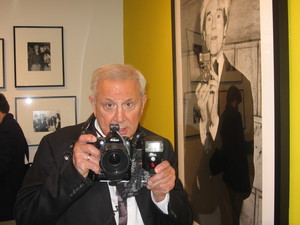 "A great photograph," Andy Warhol said, "shows the famous doing something unfamous. Ron Galella is my favorite photographer." He hid in bushes and behind trees. Driving like a madman, he outraced celebrities to their destinations. He bribed doormen, chauffeurs, head waiters, security guards. He lurked in parking garages. He knew the back ways into ballrooms. He forged credentials. He chased his prey for blocks on foot. Year after year, he outworked, outran and outsmarted his competition, and he ran with a ferocious pack. Even now when he is wealthy, he hasn't stopped standing in the cold to get his shot. 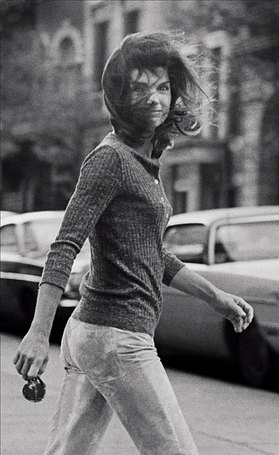 That's what I respond to. His life force. In his passion for his work, he is a genuine man. Consider his obsession with Jackie, his favorite subject. His favorite out of three million photographs is the one of Jackie striding across a Manhattan street, smiling, her hair tossed around her face by the wind. It may indeed be the best photograph of her ever taken, because it is not posed, not self-aware. It reflects her spirit. "Look at that smile," Galella says. "That's my Mona Lisa."

"I think at the time Jackie became my girlfriend," Galella muses. "I wasn't married, I didn't have a girl friend..." Galella is a big and burly man, and I suspect if he had seen someone endangering Jackie, he would have hurled himself forward in disregard of his own life. In the famous court case, Jackie testified she "didn't know" if she could be considered famous. For Galella, her celebrity was catnip: Galella's attorneys presented evidence that the two most famous woman in the world were Jackie and...the Queen. 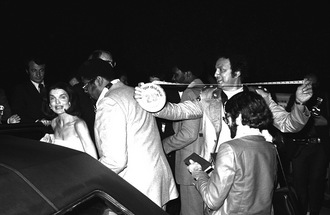 You couldn't keep this guy down. The court ordered him to keep 75 yards from Jackie. The distance was later lowered to 25 feet. He tipped a pal to be outside the Beverly Hills Hotel when he knew Jackie would be there. The pal took the photo above of him holding a tape measure. I know. I expect lots of readers to tell me he is deranged and I am deluded. But you gotta hand it to the guy.

Look how he handled the famous incident with Marlon Brando. Sure, he was stalking him, as is a paparazzi's nature. Brando socked him in the jaw so hard he lost five teeth. He went to an emergency room to be treated, and turned up later with his jaw wired, still shooting. On the next occasion he wanted to photograph Brando, he turned up wearing a football helmet. And made sure they were photographed together. 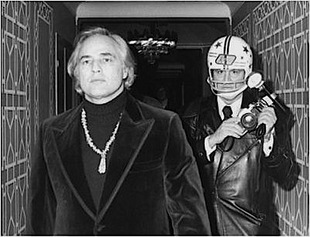 I think he loves celebrities. First, they earn his living for him. I am unaware of a single Galella photograph taken as pure art, and the film and a web search reveal none. For Ron, the subject was the photograph. I can't speak as a stalked celebrity, but is there something a little touching about a guy who will travel halfway around the world and stand all night in the rain to take your picture? Or lock himself into a warehouse overlooking the Thames for a weekend, with food and toilet paper, to shoot Liz and Dick's yacht when they arrived on board?

At his Sundance press conference, Robert Redford was asked about "Smash His Camera." Redford of course had a long-running feud with the relentless Galella. He said he hadn't seen the film, but he would tell a Galella story, "because it's one where I win." He began a tale of shooting "Three Days of the Condor" on location outside the New York Times building, and how to elude Galella he entered one end of the building, raced through its second floor to the other end, slipped into his trailer, disguised his stand-in as a double, and had him run to his car and be driven away. He was able to enjoy the sight of Galella hurling himself onto the trunk of the limo to shoot through its back window. Touche! Still, you gotta hand it got the guy. 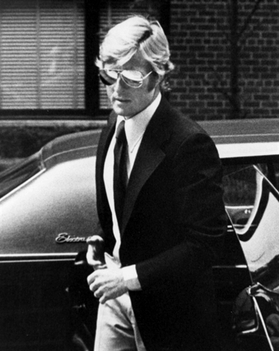 I said he captured the icons of an era. That era is over. The film has a curiously touching scene of an apparently bright young woman looking at the enlargements on Galella's photos at a New York art gallery. She wonders who Sophia Loren is. Doesn't recognize Bianca Jagger. Thinks maybe that might be...Robert Kennedy? We are spared the possibility she wouldn't recognize Sinatra, Katharine Hepburn, Warren Beatty, Steve McQueen, Truman Capote.

Hey, those people are famous! They were to us, anyway. What Galella shares in common with his celebrities is that they inhabited the same moment in time, and he took it very seriously indeed. I hesitate to suggest this, but I suspect Jackie would be pleased by that photo of her in full stride. What's not to love?

"Smash His Camera" won the Best Documentary award at Sundance 2010. •Ron and Betty Galella read this entry, and sent me these photos.