"Life Itself" Screens Tonight at the Chicago International Film Festival

"LIFE ITSELF," director Steve James's acclaimed documentary about the extraordinary life and work of iconic film critic Roger Ebert, is coming back to Chicago for one night only at the AMC River East 21, tonight, Wednesday, October 22nd, at 8pm, as part of the 50th Chicago International Film Festival. Don't miss your chance to see the year's most talked about documentary on the big screen.

Roger Ebert may have been the most famous film critic in the world, but his story started right here in Chicago. James, the film's director, is the man behind such acclaimed documentaries as "Hoop Dreams" and "The Interrupters," and was ranked at #1 in New City's 2014 list of the city's Top 50 "Screen Gems." His film is filled with beautiful scenes featuring such essential Windy City characters like Gene Siskel (Roger's indelible co-host), Rick Kogan of the Chicago Tribune, Josh Golden of Table XI, Bruce Elliot of the Ale House, film critic Jonathan Rosenbaum, and Bill Nack of Sports Illustrated. There are also revealing interviews with many of the brilliant filmmakers whose work Ebert championed, such as Werner Herzog, Errol Morris, Gregory Nava, Ramin Bahrani, Ava DuVernay and Martin Scorsese, who also served as an executive producer on the film.

At the heart of the picture is its tender love story between Roger and Chaz Ebert, his wife of 21 years and publisher of RogerEbert.com, which endured amidst the critic's battle with cancer during the last years of his life. Any couple who has taken seriously the vow "in sickness and in health" will find themselves relating to the extraordinarily intimate footage of Roger and Chaz facing seemingly insurmountable obstacles together, hand in hand, and triumphing over them more than anyone could've ever imagined. In Chaz's own words, "This is a film that will make you laugh, make you cry, but more important, make you grateful for every precious moment of love and life itself."

Both Steve James and Chaz Ebert are scheduled to be in attendance at the Chicago screening tonight. Tickets can be purchased at the AMC River East 21, 322 East Illlinois Street,  or at the Chicago Film Festival office, at 30 East Adams Street, Suite 800, or over the phone by calling 312-332-FILM, or online at the official festival site. 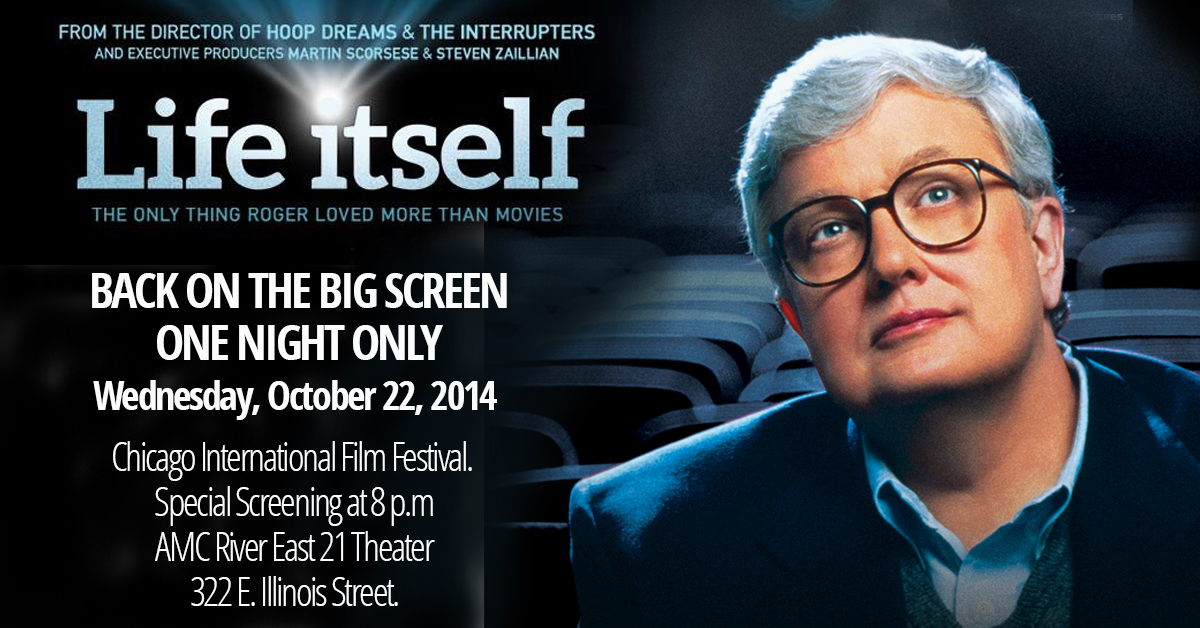