A funny thing happened on the way to the Oscars. Not to the Oscars. To me. I sustained a hairline fracture of my left hip. I didn't fall. I didn't break it. It just sort of... happened to itself. Most of the time, it causes me no pain at all. But my left leg won't bear any weight, nor can I walk on it. This pain is off the charts. It has nothing to do with cancer. It's plain bad luck.

The good news is that I've seen the films of one of the best recent years in cinema. I wrote more than 300 reviews in 2012 -- a record -- and it was unusually difficult to leave out many of the quote-unquote "best" films in 11th place.

Footnote: : I've added "Cloud Atlas," "We Need to Talk About Kevin," "West of Memphis," and "Prometheus" to the Grand Jury Prizes. I wrote the list while in hospital for a fracture, it went through many revisions, and those two got lost between Top Ten and Jury. In "Joe vs. the Volcano," this is known as a Brain Cloud. 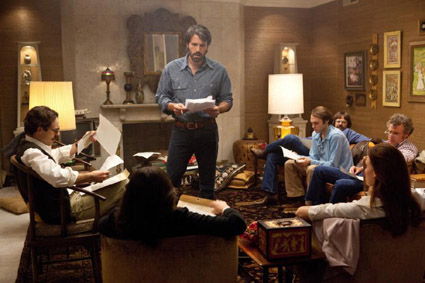 This film takes first place on my best movie list because it is above all else a movie -- pure, strong and sound. It has the classic values of a Hollywood thriller. It is "based on a true story." Yes, it is. Countless movies are "inspired on real events," but these truly took place. The extraction of the six Americans remained top secret for 18 years. They all returned safely to America. In "Argo," a fake sci-fi movie called "Argo" is floated as a cover story to explain some Americans in Iran during the hostage crisis. This fake "Argo," needless to say, was never filmed. The new film reveals surprises about a story we all lived though. It is told with classic comedy and tension. 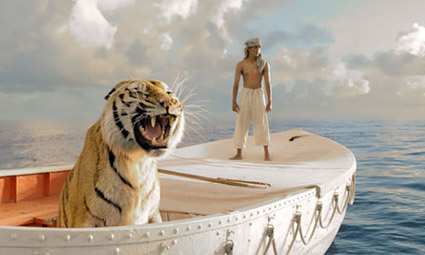 Ang Lee's "Life of Pi" is a miraculous achievement of storytelling and a landmark of visual mastery. Inspired by a worldwide best-seller that many readers must have assumed was unfilmmable, it is a triumph over its difficulties. It is also a moving spiritual achievement, a movie whose title could have been shortened to "Life."

The story involves the 227 days that its teenage hero spends drifting across the Pacific in a lifeboat with a Bengal tiger. It expands into a parable of survival, acceptance and adaptation. The story begins in a small family zoo in India, where the boy christened Piscine is raised. The zoo goes broke, and Pi's father puts his family and a few valuable animals on a ship bound for Canada. In a bruising series of falls, a zebra, an orangutan, a hyena and a tiger tumble into the boat with the boy, and are swept away by high seas. His family is never seen again. The film steadfastly refuses to sentimentalize the tiger. 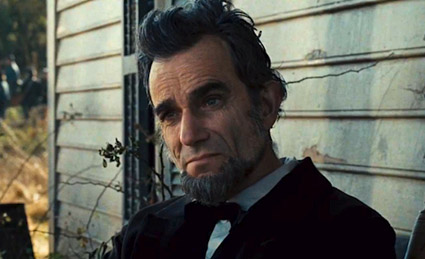 I've rarely been more aware than during Steven Spielberg's "Lincoln" that Abraham Lincoln was a plain-spoken, practical, down-to-earth man from the farmlands of Kentucky, Indiana and Illinois. He had less than a year of formal education, and taught himself through his hungry reading of great books. I still recall from a childhood book the image of him taking a piece of charcoal and working out mathematics by writing on the back of a shovel.

Lincoln lacked social polish but he had great intelligence and knowledge of human nature. The hallmark of the man, performed so powerfully by Daniel Day-Lewis in "Lincoln," is calm self-confidence, patience and a willingness to play politics in a realistic way. 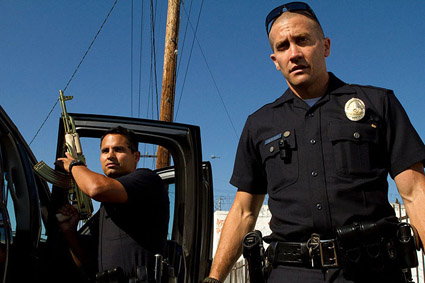 Here is one of the best police movies in recent years, a virtuoso joining of performances and often-startling action. It stars Jake Gyllenhaal and Michael Peña as Taylor and Zavala, two Los Angeles street cops who bend a few rules but must be acknowledged as heroes. After too many police movies about officers who essentially use their badges as licenses to run wild, it's inspiring to realize these men take their mission -- to serve and protect -- with such seriousness they're willing to risk their lives.

Taylor and Zavala fit the template of the "cop buddy movie," but "End of Watch" goes so much deeper than that. They've been partners for years, and are so close that Zavala's wife Gabby (Natalie Martinez) and Taylor's girlfriend Janet (Anna Kendrick) have become like sisters. They're transferred to a tough, largely Mexican-American district, where their persistence leads them across the scent of a Mexican drug cartel operating in L.A. This is really an assignment for a detective, but they don't avoid risk, and eventually become so dangerous to the cartel that a hit is ordered against them. 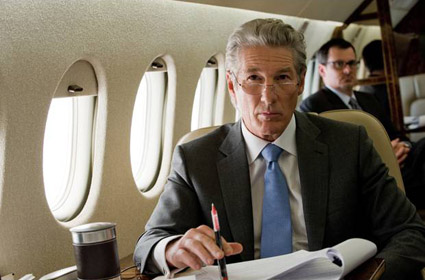 We tend to identify with the leading character of a film, even if he is a heartless bastard. Few films illustrate this curiosity better than Nicholas Jarecki's "Arbitrage," and few actors might have been better at making it work than Richard Gere . Here is man involved in a multi-million-dollar fraud, who cheats on his wife, tries to cover up the death his mistress, and would throw his own daughter under a bus. Yet we are tense with suspense while watching him try to get away with it.

Gere has always been an actor good at suggesting secrets under the surface. Improbably handsome, he has aged here into the embodiment of a Wall Street lion, worth billions, charming, generous, honored, and a fraud right down to his bones. He plays Robert Miller, whose face must have beamed reassuringly from the covers of many magazines. As the story opens, he's involved in the merger of his venture capital empire, and has hidden $400 million in debt not only from the investors but even from his daughter Brooke (Brit Marling), the CFO of his empire. Young, smart, she doesn't suspect her father has cooked the books. If the deception is revealed, she'll be left hanging out to dry. 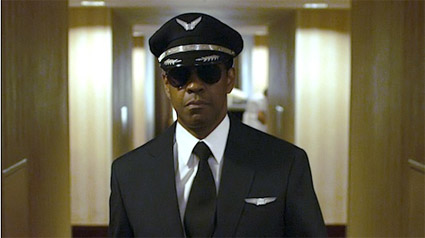 After opening with one of the most terrifying flying scenes I've witnessed, in which an airplane is saved by being flown upside-down, Robert Zemeckis' "Flight" segues into a brave and tortured performance by Denzel Washington -- one of his very best. Not often does a movie character make such a harrowing personal journey that keeps us in deep sympathy all of the way.

Washington plays Whip Whitaker, a veteran commercial airlines pilot who over the years has built up a shaky tolerance for quantities of alcohol and cocaine that would be lethal for most people. At the film opens, he's finishing an all-night party with a friendly flight attendant named Katerina (Nadine Velazquez), and jolts himself back into action with two lines of cocaine. Their flight takes off in an alarming rainstorm, and encounters the kind of turbulence that has the co-pilot crying out, "Oh, Lord!" But Whip powers them at high speed into an area of clear sky, before a mechanical malfunction sends the aircraft into an uncontrollable nose-dive. The way Zemeckis and his team portray the terror in the cabin is stomach-churning. Acting on instinct, seeming cool as ice, the older pilot inverts the plane to halt its descent, and it flies level upside-down until he rights it again to glide into a level crash-landing in an open field. 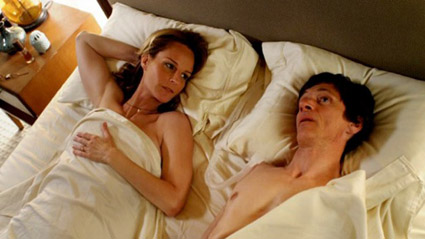 You can tell from his reedy voice that speaking, for Mark, is an effort. He's 38 years old and has spent most of those years in an iron lung. His body is thin and twisted. He depends on Vera, his caregiver, to wheel him around during a few hours a day out of the mechanism.

He has an instinct that his time is running out. He would like to experience sexual intercourse with a woman once before he dies. His need requires an awesome dedication. Mark is played by John Hawkes, who has emerged in recent years as an actor of amazing versatility. What he does here is not only physically challenging, but requires timing and emotion to elevate the story into realms of deep feeling and even comedy. More than most movies, "The Sessions" depends on two actors if it is to work at all -- and here Helen Hunt provides a performance of tact and delicacy. 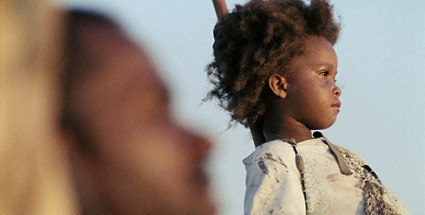 Cut off from the mainland, surrounded by rising waters, the Bathtub is a desolate wilderness of poverty where a small community struggles to survive. Hushpuppy considers it "the prettiest place on Earth." She is a fierce and unbreakable 6-year-old girl who lives here with her father Wink and other survivors who exists so close to the earth that it might as well be them.

In the opening moments of "Beasts of the Southern Wild" I had no idea when or where we were. Only gradually did I understand that the Bathtub is offshore from New Orleans, isolated by levees, existing self-contained on its own terms. The distant profiles of drilling rigs and oil refineries might as well be mysterious prehistoric artifacts.

A fearsome storm is said to be on the way, but existence here is already post-apocalyptic, the people cobbling together discarded items of civilization like the truck bed and oil drums that have been made into a boat. Their ramshackle houses perch uneasily on bits of high ground, and some are rebuilding them into arks they hope will float through the flood. Hushpuppy is on intimate terms with the natural world, with the pigs she feeds and the fish she captures with her bare hands, and sometimes she believes animals speak to her in codes. 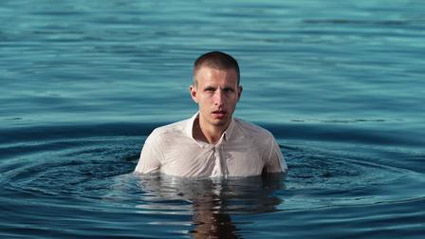 "Oslo, August 31" is about a day, a city, and a 34-year-old man named Anders, who is on release from a drug rehab center so he can go to a job interview. The film opens with his memories of growing up in Oslo, described in snatches of dialog and shown in glimpses of film. Here he was happy. Almost every street and turning is familiar.

Are we seeing a dream as it unwinds? Anders (Anders Danielsen Lie) awakens in a hotel room next to a woman we never meet, walks nearby to a wooded stream, fills his pockets with rocks and walks into the water. After an uneasy time, he pops up sputtering and climbs back on the shore. He changes clothes and goes for his interview. 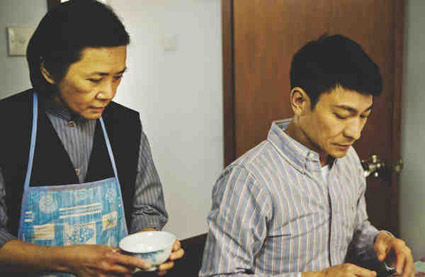 This film paints portraits of two good people in gentle humanist terms. It filled me with an unreasonable affection for both of them. Here is a film with the clarity of fresh stream water, flowing without turmoil to shared destiny. No plot gimmicks. Just a simple life.

The life is that of Ah Tao, who was orphaned during the Japanese occupation of Hong Kong, spent her entire life in the service of four generations of a Chinese family, and is now the servant of the only family member still living in China. He is Roger, a movie producer. They have a settled routine: During a meal he puts out his hand, knowing she will be standing behind him with a bowl of rice. No words.

At many film festivals, the juries come up with a cockamamie category named the Grand Jury Prizes. It finds room for titles that were as good, in one way or another, as the others. Finding them a place in the numerical listing is a problem, because, really, what does such a ranking mean? Here are my ten Grand Jury Prizes, arranged in that frustrating order -- alphabetically:

My full-length reviews are online at rogerebert.com. This version replaces an earlier version posted overnight. This is the correct version. -- Roger.