Sometimes when I get exasperated, I curl my lips into a grimace. My lower lip pushes against my upper lip while my nose wrinkles in disgust. I did this for years without realizing that the expression was stolen directly from Kermit the Frog. By contorting his iconic puppet’s flexible face, Jim Henson came up with an indelible image of aggravation that no human or amphibian could possibly replicate. I loved it so much that it became a natural part of my body language.

Our relationship with fictional characters can be a profound one, a fact illustrated in abundance at Comic-Con 2014. Everywhere you looked, strangers were connecting through their shared love of pop culture by displaying how fantastical beings had influenced their very identities. No outfit was too outlandish to be greeted with public approval. Walking through the crowds outside the convention center doors was a theme park ride in itself. I could’ve simply strolled up and down the sidewalk all day and been perfectly entertained—and that’s more or less what I did. My task at Comic-Con was to promote "Life Itself" by distributing fliers, some of which cleverly portrayed the film’s subject, Roger Ebert, as a superhero (his wife Chaz’s recent essay provided the inspiration).

My lack of a badge was hardly a concern, considering the vast plethora of activities surrounding the exclusive indoor panels. Thrill-seekers could zip line over the skyline of Gotham City, venture into the Adult Swim funhouse and partake in an Assassin’s Creed obstacle course that fused the Reality TV spectacle of “Wipeout” with the general frustration of “Legends of the Hidden Temple.” The real show, however, was the never-ending costume parade engulfing onlookers at all times. I was struck by just how few of the disguises were inspired by comic books. There was Jules Winnfield carrying his precious briefcase, countless pairs of “Frozen” heroines Anna and Elsa, a mad Joker on stilts, the entire cast of "Spaceballs"—including Barf the Mawg (whose ears really moved), a squadron of red-hooded bicyclists carrying benevolent extra-terrestrials, and every conceivable breed of catwomen. There was even a plucky lady in a Lobby Boy outfit, though she swore to me that she had purchased the attire two years before "The Grand Budapest Hotel" was released. 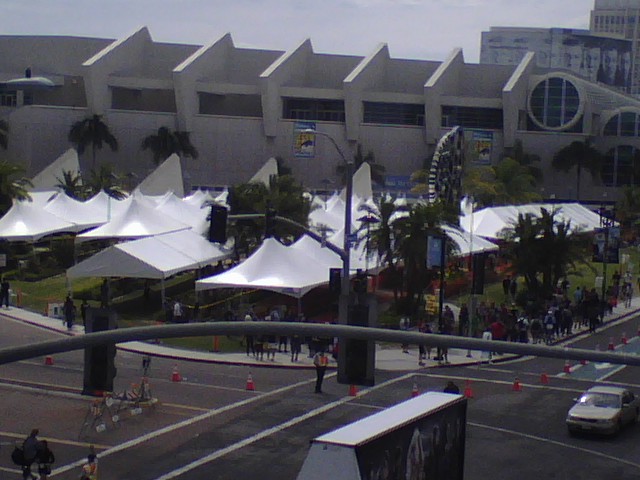 Many of the costumes were so ingenious that they left me utterly gobsmacked. One man was dressed as a centaur and had animatronic hind legs that galloped behind him. In contrast, I felt severely underdressed. The least I could’ve done was draw a lightning bolt on my forehead. The last time I did that was at a midnight screening of "Harry Potter and the Chamber of Secrets," and it resulted in me getting accosted for autographs. Yet even in my pedestrian clothes, I still managed to spread the word on Roger and Steve James’ wonderful documentary about him, handing out several hundred fliers to the attendees (many thanks to Nell Minow for bringing them into the center as well). I had some lovely encounters with passerbys whose faces lit up when they saw Roger etched on the paper. One cinephile said he saw the film at Sundance and loved it. Another said that she was a huge fan of “Siskel & Ebert” and sorely missed the program. Many people were grateful to hear of the film, which confirmed for me that my efforts were not in vain, even in the midst of so many expensive promotional stunts vying for the spotlight. With its circus-like atmosphere and wild mixture of art and commerce, Comic-Con has become as exhilarating, star-studded and chaotic as the Cannes Film Festival.
Advertisement

The lack of a pass inevitably limited my number of celebrity sightings, the most memorable of which occurred during my trip home, when I stumbled upon Paul Rudd at the San Diego airport (he was super-friendly once he sized me up and realized I wasn’t an autograph hound). Of course, I wasn’t exactly in the target audience for many of the hottest attractions. I got more excitement out of seeing the Screen Junkies guy than I did observing the cast of “The Walking Dead” waving to their swooning admirers. Despite all the hype for this year’s panels, the biggest buzz centered on the ones expected at next year’s convention, which will be promoting the next "Star Wars" film as well as "Batman Vs. Superman."

Nothing got my heart racing quite like the San Diego Symphony’s Friday night concert held under the stars at the rapturous Embarcadero Marina Park South venue perched on San Diego Bay. The two-and-a-half hour show consisted of music composed by Danny Elfman for the films of Tim Burton, whose career evolution parallels that of Comic-Con, which had a cult status before it was embraced by the mainstream. Early in the show, conductor John Mauceri informed the crowd that Elfman had arranged the music exclusively for the concert while Burton had edited the montages of film clips that screened during the performances. Lending incalculable power were the angelic voices of the SACRA/PROFANA choir, though the biggest showstopper of all was violinist Sandy Cameron, who danced across the stage during her astonishing solo for "Edward Scissorhands," sporting a Burtonesque hairdo and earning a well-deserved standing ovation. It was, quite simply, one of the most breathtaking live performances I’ve ever had the privilege to witness (catch it in L.A. this fall).

What struck me the most about Elfman’s brilliant work this time around was how it rendered the accompanying imagery unnecessary. Listen to the reverberating note patterns in "Batman" and you see bat wings flapping. Listen to Cameron’s impeccably plucked strings and you see Edward’s sharpened appendages transforming suburban women’s hair into abstract marvels. Even Elfman’s score for Martin Brest’s 1988 buddy comedy, "Midnight Run," (available on the essential 1990 compilation “Music for a Darkened Theater”) achieves the same sort of grandeur. The track includes one of the sublimely melancholic pieces of music ever written. It is the melodic equivalent of two middle-aged guys sitting at a bar, trading wistful stories from the past while kindling an unlikely friendship. The notes move at the deliberate rhythm of their voices and also share their hushed, insistent tone. There is even a moment when the music—I kid you not—audibly “shrugs.” Just try listening to this piece without picturing De Niro lifting up his shoulders in ambivalence.

As the sun began to set on my short yet spectacular trip to “nerd heaven,” I saw a young puppeteer bringing the Muppets’ tireless comic relief, Gonzo, to life outside one of the convention doors. It was the best Gonzo puppet I had ever seen in the flesh (or foam), and I immediately found myself engaging in a conversation with him. I asked the cheerfully eccentric creature how he was enjoying Comic-Con, what Rizzo the Rat was really like as a scene partner and whether blue fur was prone to sunburn. I ended our chat with a high-five and walked away with a spring in my step. It wasn’t until later that I realized I never once looked at the puppeteer himself. He had perfected Gonzo’s mannerisms and spirit to such a degree that the hand operating every move had vanished. Then I remembered that was the point—not only of puppetry, but of Burton’s "Batman" films and of Comic-Con itself. Sometimes a mask can be the most revealing reflection of our inner selves. No wonder I like Kermit so much. He is the very embodiment of Henson’s soul—generous, ambitious, obsessive and eternally hopeful.

For more stories from Comic-Con 2014, check out the coverage provided by our two veteran attendees:

Time with the Oculus Rift

Ships of the Line

Highlights from the Pressroom

A Celebration of Self-Involvement

Samsung Galaxy and The Hunger Games

A Sneak Peek of "Avengers: Age of Ultron"