Friday was all about survival. While The Hunger Games experience didn't give you much hope, The Simpsons World experience at San Diego Comic-Con 2014 begins by giving you a survival kit before you enter the mind of Homer Simpson, or Homer's Dome, a projection mapping experience. Don't worry. "The Simpsons" hasn't gone all apocalyptic survival science fiction. We're talking about surviving the FXX Simpsons marathon. That's a major couch potato event that only the worthiest D'oh spud or spudette can survive. 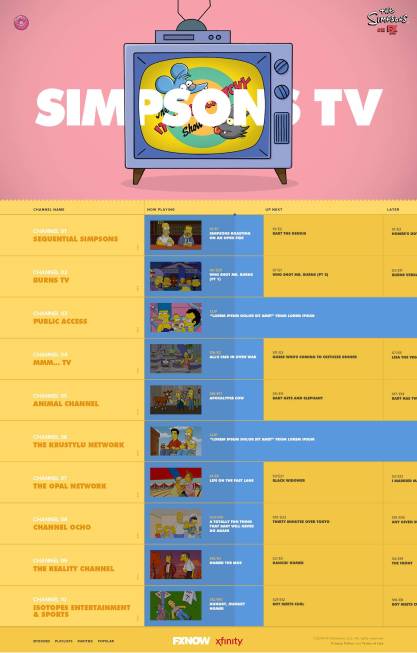 To date, that's 552 episodes and in case you missed a few, the Dome that is Homer's head, goes through some highlights. As you might expect that yellow dome is quite roomy and, at the center, is a comparatively small brain. Looking up and best viewed lying down on your back as one might expect for anything having to do with one of America's most famous couch potatoes, you can see snippets from all of those 552 episodes, but also probably twice that number of donuts. But you'll also get introduced to a new app (more on that below).

The Simpsons World experience at SDCC 2014 also includes a chance to eat free blue cotton candy from Marge's Sweet Station, win a donut-shaped inflatable pillow at the Kwik-E-Race game, take photos with life-size figures of The Simpsons (which you can submit to be included in the FXX upcoming marathon broadcast of all 552 episodes), and participate in FXX's attempt to be in the Guinness World Records under the most contributions to a painting by numbers.

The digital cable and satellite TV channel FXX which is operated by Fox Entertainment Group will begin a chronological marathon of "The Simpsons" beginning on August 21. Prepare for the D'oh-vastation. FXX will then be the home for all 25 seasons of "The Simpsons." FXX will also be launching "Simpsons World," a digital resource which according to the press release is "the ultimate Simpsons digital experience featuring enriched branded content through SimpsonsWorld.com and handheld/connected devices via FXNOW, the authenticated multi-network on-demand video service supporting FX, FXX and FXM - in October. "Simpsons World" will offer a unique and personalized Simpsons experience for both casual and super fans by allowing users to interact with premium content in unprecedented ways.  or the first time ever, authenticated FXX viewers will have instant and on-demand access to all 25 seasons of the iconic animated series The Simpsons via the "Simpsons World" site and FXNOW apps for iPhone, iPad, Xbox One, Xbox 360, Android phones and tablets, Smart TVs and additional set-tops devices."

"Homer's Dome" will be open until Sunday, July 27, from 10am until 6pm at the Bayfront Park next to the Convention Center in San Diego. I survived the Dome, but I still need to survive SDCC.