Cameron is recrowned King of the World 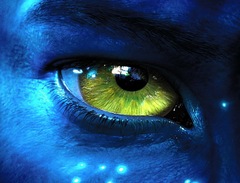 The thing about James Cameron is, he can get his mind around a project the size of "Avatar" and keep his cool. If it requires the development of untested technology, he takes the time to work on it. If he wants to create aliens human enough to be sexy and yet keep them out of the Uncanny Valley, he test-drives them. If it costs $250 million, as reported, or $350 million, as rumored, you reflect: That's a lot of money, but after seeing the movie I guess I saw most of it up there on the screen.

It became a favorite sport in some Hollywood circles, and even among critics not a million miles distant from myself, to publicly doubt Cameron's claims. He took ten years, starting with a story he began writing years before that? He was determined to film in 3-D, but no 3-D was good enough, so he had to perfect the next generation of that contentious process. The film needed 163 minutes to be told, causing anxiety among exhibitors eager to usher in a new audience every 120 minutes? If that's what it took, that's what it took. 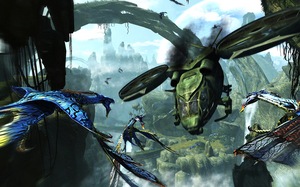 After the epic success of his "Titanic," the highest-grossing movie ever made, no one was prepared to say no to him. That is a risky position to be in, and Hollywood is littered with the corpses of films that were made next after big hits by their makers. There's even a joke about that:

"Now that you've set box office records, what are you going to do next?"

"I've got this script in my desk drawer that I've been working on since the 1980s, but until now no one has ever wanted to back it." 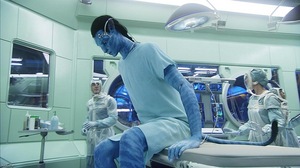 Doubt descended upon Cameron's fans after he previewed 18 minutes of "Avatar" in the autumn. Audiences were underwhelmed. Did the alien race of Na'vi look a little creepy? Or not creepy enough? The term Uncanny Valley is used by robot theorists and special effects technicians to describe artificial humanoids who look "too" human, so that their artificiality becomes unsettling. Better Robby the Robot as your housecleaner than a Stepford Wife.

In the days before the first press screenings of "Avatar," a sort of frenzy gripped certain web fan sites. Then the great day arrived, 20th Century-Fox issued individual invitations and posted guards at the door, the chosen people filed in, the movie began, silence descended, interest grew, and doubts were dispelled. Cameron had done it.

Fox made much of a press embargo: No critics were to review the film until Fri. Dec. 18, its opening day. A flaw in this theory was that the movie opened a week sooner in England, and American fans, not witless, were instantly devouring the London reviews. 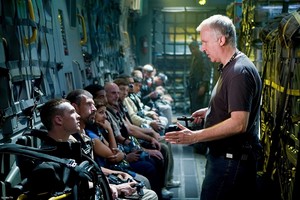 Kirk Honeycutt of the Hollywood Reporter broke the U.S, embargo and referred to Cameron's infamous speech when "Titanic" won as best picture: "A dozen years later, James Cameron has proven his point: He is king of the world." Todd McCarthy of Variety was also an embargo-breaker: "Cameron delivers again with a film of universal appeal that just about everyone who ever goes to the movies will need to see."

You could call those the kinds of reviews Hollywood likes to read, and it's unlikely Honeycutt or McCarthy will be denied entry to Fox screenings anytime soon. What was the point of an embargo, anyway? Was Fox afraid the reviews would be negative? By Friday afternoon editors at the Sun-Times and Tribune were growing restless as the good news leaked out, and both papers published reviews. Soon a movie that wasn't supposed to be reviewed was sporting high numbers in the Tomatometer (86% as I write).

More sincere praise came from a woman seated not far from me (no, not Chaz), who felt the call of nature, raced out to the facilities, hurried back in, sat down, and 10 minutes later realized she'd forgotten to put her 3-D glasses back on. 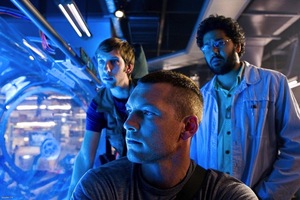 "Avatar" creates a new world from scratch, and, as Lucas did in "Star Wars," fills it with such countless minute details that it doesn't seem artificial. Well it does, but it's as real as a fantasy can seem, if you see what I mean. The creatures of this planetary forest are many-toothed and preposterous, but not the grotesque artifices of so many monster movies. Their battles seem sincere and earnest, and not the banging of pots and pans as in "Transformers: Revenge of the Fallen."

The special effects pioneer Ray Harryhausen, who made horses fly and sent skeletons into battle, is still alive at 89. If he sees "Avatar" he'll possibly feel the kind of pride Werner von Braun might have felt the day men walked on the Moon. Yet "Avatar" isn't primarily about Harryhausen's kind of special effects at all, in the traditional sense. Its use of CGI means that in the scenes on Pandora it's every bit as much an animated film as "The Polar Express," "Beowulf"--or "Snow White and the Seven Dwarfs," which also used motion capture, although its artists drew on paper, not computers.

Cameron has told a story with comprehensible emotional motivation, physical events that make sense at least within the realities of his imaginary world, and an alien race that exists not as foils for ray guns but an indigenous people living in harmony with their environment. His movie has a Green message and an anti-war message, both effective and organic parts of the plot. 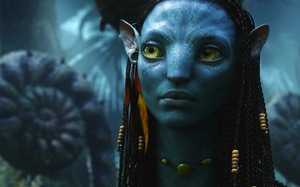 Those towering blue Na'vi with their long tails look peculiar at first, but it's strange how quickly they grow on us. You don't whip up aliens like that with a sketch pad. It takes trial runs and countless hours of testing. And Cameron was equal to the test. He also overcame the bane of 3-D, which is dimness. His Dolby 3-D seems noticeably brighter. His use of 3-D is restrained; he doesn't poke his picture in our eyes, and his editing makes sense of things, unlike Michael Bay's mixmaster approach.

James Cameron set out to do a lot of very difficult things and to do them all correctly. It took him and his many collaborators a long time and a lot of money, but how many filmmakers could have done it at all? The King of the World has been re-elected.

My review of "Avatar".

Footnote to the third video for all the readers who helpfully pointed out it isn't about the same "Avatar" movie. Yes, I know. I added it in a fit of whimsy. Under your tree, don't you always have few "joke gifts?"