Patrick Wilson has made a career out of playing characters whose wholesome, all-American good looks cover up deep moral conflict, from early films like “Hard Candy” and “Little Children” to more recent efforts like “Space Station 76” and “Home Sweet Hell.” He excels at it—he seems comfortable with the kinds of uncomfortable contradictions these roles provide.

And so it comes as no surprise that in his latest film, the unfortunately titled “Zipper,” the family-values prosecutor he plays is hiding an increasingly reckless fetish for high-priced escorts. Wilson brings as much integrity as he can to this tormented figure and he leads an impressive supporting cast that includes Lena Headey, Ray Winstone and Richard Dreyfuss, who anchor a handful of individually solid scenes.

Despite all their efforts, though, they can’t save a movie that’s at odds with itself. This second feature from director and co-writer Mora Stephens has all the stylistic and thematic trappings of a made-for-cable movie you’d watch late at night and hate yourself for in the morning. But it also strives, kinda, to be a serious political drama and to make a statement about the public’s tendency to rush to judgment in the face of hypocrisy. Its shadings of the 2008 Eliot Spitzer prostitution scandal are unmistakable, yet the film as a whole feels sort of retro as a tawdry cautionary tale. How can we enjoy clucking at this ambitious man’s downfall when tens of millions of people have had their own extramarital activities exposed in the Ashley Madison hack? It all seems more quaint than criminal.

Like Spitzer, Wilson’s Sam Ellis is a star on the rise. He’s a smug federal prosecutor in South Carolina with a strong track record and a secure home life. His wife, Jeannie (Headey), is beautiful, stylish and politically connected; a former lawyer herself, she now devotes her time to raising the couple’s young son, performing charity work and maintaining a gracious and immaculate home.

The first meeting at a luxury hotel—with a sweetly reassuring brunette named Christy (Alexandra Breckenridge, a standout in a single scene)—doesn’t go so well at first, and his awkwardness provides genuine tension. (Amusingly, she refers to the cash he’s brought her in an envelope as a “donation.”) But from that point, he’s hooked, which Stephens and co-writer Joel Viertel depict through a standard but slickly edited montage of visits to the ATM and trysts with a variety of women in expensive lingerie.

At the same time, though, Sam has his eye on Washington, and makes plans to run for Congress with the help of his shrewd wife, a ruthless campaign consultant (Dreyfuss) and a magazine writer (Winstone) whose fawning article positions his launch. And so, as is so often the case with self-destructive types, Sam pursues his sexual desires with greater fervor just as his seemingly squeaky-clean personal life is about to undergo massive scrutiny. At his most desperate, he gets hit by a car while running across the street to pull out more cash, but he keeps going because he’s so obsessed. Ostensibly, this moment is meant to be suspenseful and dramatic but it ends up being unintentionally funny.

Despite Wilson’s dedication to humanizing this clichéd figure, “Zipper” actually becomes more compelling in its third act when it shifts its focus to Jeannie—her reaction to her husband’s infidelities and how she weighs the betrayal against her own dreams of power and prestige. Headey is coolly fierce and shares some powerful moments with both Wilson and Winstone as the reporter who threatens to expose this juicy sex scandal. But these scattered pieces don’t create a complete and convincing picture.

You want the real scoop that won’t leave you feeling icky afterward? Check out Alex Gibney’s richly detailed 2011 documentary: “Client 9: The Rise and Fall of Eliot Spitzer” instead. 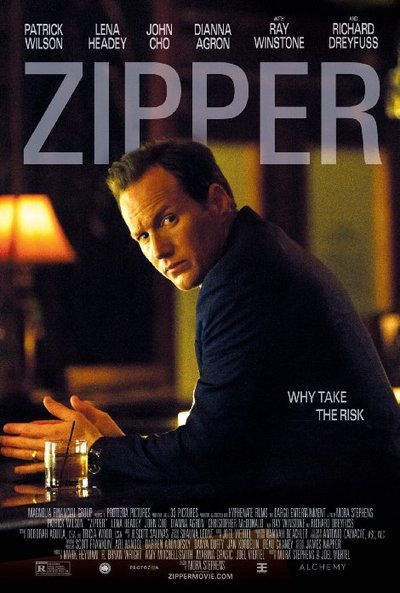