The first 20 minutes of "Home Sweet Hell" are so bleakly unfunny that it reaches an almost existential plane. Questions start arising immediately: Is it satire? Is it black comedy? What is this? Once things move into openly psycho territory, "Home Sweet Hell" gets a tad more interesting, but even amateurs know that you have to start strong. You have to set up the world and the tone and the mood from the get-go. Director Anthony Burns fails to do that. "Home Sweet Hell" never recovers from those opening scenes that take place in a really awkward universe, where actors stand around, entering through doorways at the back of the frame, and then exiting through those same doors, like a poorly blocked high school play. People seem adrift in space. There are no jokes in the script (by Carlo Allen, Ted Elrick and Tom Lavagnino), just sneers and innuendo, and the mood is unremittingly hostile towards women. The fact that a woman has Crohn's disease is meant to be hilarious, in a nudge-nudge wink-wink "You know she's not giving her husband any sex" kind of way. It's wretched.

Mona Champagne (Katherine Heigl) scrapbooks obsessively, imagining herself into a perfect life with the perfect house and yard and family. She dresses like a perky Stepford Wife, and seethes with hostility beneath her gleaming polished surface. Her two children are scared of her. Her husband, furniture salesman Don (Patrick Wilson), is henpecked, terrified, and horny, because Mona schedules sex with him once a month and only leaves 15 minutes in the calendar for it. Mona is shown scrubbing the sink with a toothbrush and yawning when Don tries to make a pass. She treats him with open contempt and yet he continues to insist he loves her, although why is anyone's guess. It's more like he's trapped in a cult.

Don starts up an incredibly indiscreet affair with a sexy sales associate named Dusty (Jordana Brewster), who slinks and slithers her way through the furniture store, leaving Don and his partner, played by Jim Belushi, drooling in her wake. They hire her because neither of them are getting laid (Belushi's wife is the one with Crohn's), and they want something pretty to look at during the work-day. But Don is an idiot, and he sleeps with Dusty feverishly, all over the furniture store. When Dusty turns up pregnant, she starts to blackmail him for money. A desperate man, Don comes clean to Mona.

Mona reacts quite calmly: Dusty must be killed and Don must be the one to do it. Mona makes preparations for the murder with the same cheery specificity she pours into her various decorating schemes. As a matter of fact, Mona discovers she's good at this murder thing! Like Serial Mom before her, Mona is set free by killing. Naturally, her plans go awry, and then begins the relentless bloodbath that makes up the rest of the film. There are unsavory characters with Southern accents and Scottish accents, and naked strippers who deserve better in life than to have to disrobe for "Home Sweet Hell," and tormented family barbecues that go horribly wrong.

Katherine Heigl commits to this bad material. She means every word she says. She stalks around wearing bright rubber gloves, smiling brightly, trying to clean up various bloody messes, all while bitching at Don about how incompetent he is. Heigl has had her troubles with her public image, and Mona will not help with that, but the actress is actually doing some funny and scary stuff. The woman is a total psychopath, and Heigl commits to that. Patrick Wilson mainly seems uncomfortable, a deer in the headlights, and Jim Belushi dispenses terrible advice from the sidelines. He's a boor and a bore.

There is great fodder for comedy, satire, and horror, too, in the bright world of suburbia, as well as in the women who submit to its conventionality and its material aspirations with the passion of a thousand suns. What if all the energy put into Pinterest-ing your perfect dining room were channeled into a kill spree? It could be funny. Anything can be funny. If it's funny. But "Home Sweet Hell" doesn't just fail to find the right tone. It doesn't find a tone at all. 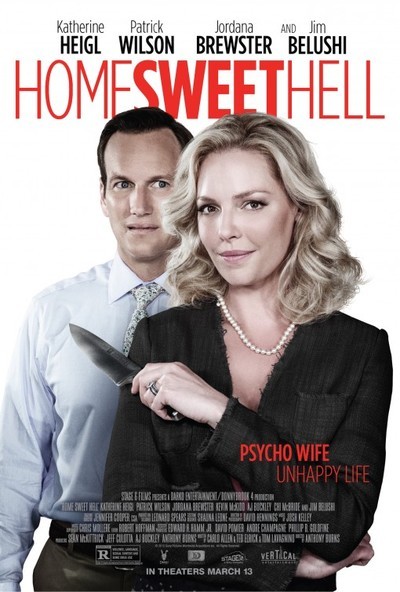 Rated R for violence, language, sexual content and some drug use