The basic joke in "Young Doctors in Love" was anticipated five years ago, in Mel Brooks' "Silent Movie." Remember the scene where Brooks and his cohorts stand by Sid Caesar's bedside, watching his heartbeat reflected on a television monitor, when suddenly the heart beep turns into a Pong game? That combination of gallows humor and contemporary cross-references is repeated again and again in "Young Doctors in Love," and it's finally not very funny. Yet the movie sounds like a good idea. Maybe it was a good idea, lost in the execution. "Young Doctors in Love" has as its modest ambition to be to "General Hospital" what "Airplane!" was to the "Airport" movies and ABC's "Police Squad" was to TV cop shows. Maybe there are two problems here: (1) It is rather hard to outflank "General Hospital," a parody of itself, and (2) If you do, you wind up skirting the edges of very unpleasant comic material about blood and death. Hospitals are just not very funny.

The movie takes place in a loony Los Angeles city hospital, where we meet all the standard types: the monomaniac surgeon, the befuddled chief of staff, and sex-and-dope crazed interns and nurses, and the ambitious young medical students in their first year of residence. There also are several long-running gags, the unfunniest being about a hit man who is turned into the hapless victim of accidents and near-fatal emergency treatments. The movie looks at times like a real life version of one of those drawings by Mad magazine's Jack Davis, in which lunatics chase each other in circles.
Are there funny moments in the middle of the chaos? Yes, there are. There is, in fact, one wonderfully funny moment, starring that superb character actor Harry Dean Stanton, he of the long face, the quivering eyelids, and the perpetual hangover. He attempts to explain the secretion of bodily fluids to the amazed young medical students, and by the time he is finished with his amazing catalog, there is not an orifice left untapped.

That's a great scene, and Dabney Coleman has some nice moments as the egotistical surgeon, obviously modeled on the sorts of Texas super doctors who do most of their operations on the cover of Life magazine. Coleman reminds us again here of his versatility; his roles also have included the boss in "9 to 5" and Jane Fonda's fiancé in "On Golden Pond." But for the rest, "Young Doctors in Love" is not very funny and not very inventive. God knows it tries. Like "Airplane!," it spends its energy trying to wedge laughs into every crevice of the plot. There are some nice moments, especially a gag about E.T. But most of the time I wasn't laughing, and toward the end I wasn't even smiling. When a comedy goes wrong, it goes very wrong. "Young Doctors in Love" goes very wrong. 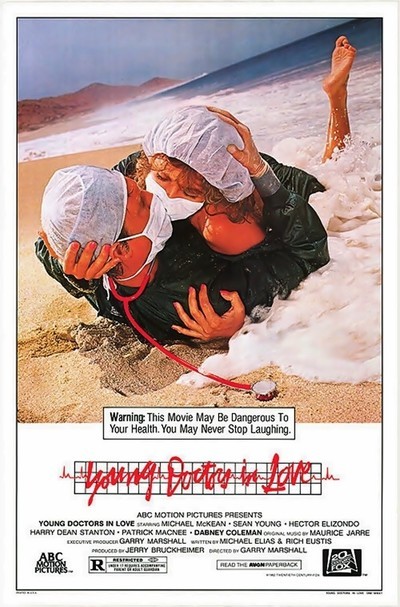