You Are Not My Mother

Irish filmmakers have slowly been creating an impressive catalog of horror films: ghost stories, stories steeped in the occult, with some monster movies thrown into the mix. Some are effective hybrids, with psychological trauma morphing into violence or psychopathy. Ireland, with its long history of ancient paganism overlaid with Catholicism, and its legends of fairies (not as cute as you might think, with leprechauns the worst of the "fairy folk," greedy little bastards), is rich territory for horror. In the last decade alone, there's been "Rose Plays Julie," "Citadel," "The Lodgers," "A Dark Song," "Caveat," "The Hallow," and the almost unbearably tense haunted-house movie "The Canal," the best of the lot (or at least it's my favorite). Many of these are directorial debuts, even more exciting since there's much to look forward to from these filmmakers. The latest is Kate Dolan's feature directorial debut, the moody, trauma-based "You Are Not My Mother," with performances that manage to be powerful, insightful, and touching, sometimes simultaneously.

Hazel Doupe plays Charlotte (shortened to "Char" by everyone, a metaphorical name if ever there was one), a cowed and intimidated teenage girl, living in a housing estate outside of Dublin. Char is a slim girl, with huge alert eyes and a red birthmark on her right cheek, the cause of mockery from fellow students, all of whom are girls. Girls are terrifying. But family is even more so. Char lives with her nearly-disabled grandmother (Ingrid Craigie), who seems never to leave the house, and her depressive mother Angela (Carolyn Bracken), who can barely get out of bed. Something's very wrong in this dusty musty household, the secrets shrieking louder than any language could.

The film starts with a terrifying mysterious prologue. A baby carriage holding a shrieking baby stands in the middle of a dark road. Why is this baby left alone in the street? A woman (Craigie) approaches and rolls the carriage into the woods, where she removes the baby from the carriage, places her in the dirt, and lights a ring of fire around her. The baby wails, the heat flickering far too close, charring (get it?) the ground around the child. None of this is explained until nearly the end of "You Are Not My Mother," and it looms over the rest of the film.

Char is a teenager, but she is the responsible one in the household, scolding her mother about there being no food in the house, begging her to get out of bed and give her a ride to school when she misses the bus. School is no better, although a kindly teacher (Jade Jordan) takes an interest in Char. One morning Angela disappears, seemingly vanishing into thin air. When she returns home a few days later, she is very different. She's sometimes light-hearted, but she can turn on a dime. She is often quite frightening. Char has been traumatized by years of neglect, and tiptoes around the house, keeping her distance. The grandmother knows more than she's saying. "You Are Not My Mother" has some plot, but it's mostly the portrait of the claustrophobia of family secrets, particularly for Char who has no idea what's going on, and slowly comes to understand that everyone has been keeping something from her, something to do with her. Her entire life has been built on fabrications and half-truths.

Dolan manages all this with a single-minded vision, collaborating with her sound designer (Brendan Rehill), composer (Die Hexen), and production designer (Lauren Kelly) to create an overall mood of tension and incipient fear. Char's house is dusty, the windows clouded over with dirt letting in thin shafts of light, and it's filled with old furniture, a couch that seems to have been there since 1958. The hallways are narrow and there are whispers behind closed doors. Talented cinematographer Narayan Van Maele uses that cramped house to its full potential. Characters are often shot through doorframes, seen only partially, or through a door left ajar. Sometimes, alarmingly, they show up in the mirror's reflection with no warning. Char's disoriented perspective is prioritized. Doupe is often on the verge of tears as she endures her own life, exhausted and frayed by secrets and silences. Her exhilaration at finally finding a friend in Suzanne (Jordanne Jones), a girl initially unfriendly but eventually kind, is extremely touching. Suzanne doesn't know anything about Char's family but senses correctly that something is very wrong.

The final sequences are the only "stock" moments in this very specific family drama, and something about the last scene left me cold. But the rest is so effective and emotional, a dedicated portrait of trauma passed down through generations, it doesn't matter. "You Are Not My Mother" is an extremely confident directorial debut.

Available in theaters and on demand on March 25th. 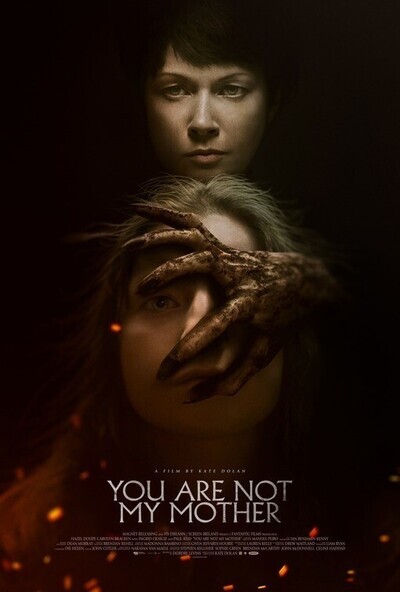