When the slick and calculating Barret (Ben Caplan) offers Isaac (Jonathan French) a five-day job "babysitting" Barret's adult niece Olga, who needs "company" at her "isolated" childhood home, Isaac, a drifter suffering from some kind of amnesia and the mental fog that goes with it, is confused. Barret claims to be an old friend, but Isaac has no memory of him. Also, why is this supposed old friend offering him so much money to hang out with a woman clearly too old to need a "babysitter"? Isaac says, baffled, "There's got to be more to it than that." Suddenly, the title card appears, in jagged letters: "CAVEAT."

"Caveat" is a masterpiece of understatement for a title, and a witty opener to Damian Mc Carthy’s directorial debut, an impressive and often terrifying film, taking place almost solely in one location, with two people trapped in a moldy dimly-lit house. Crumbling paintings whisper in the night, and a toy rabbit with human-sized glass eyes acts as a canary in a coalmine, beating on a drum furiously, as a warning, a harbinger of approaching doom. Isaac stares wildly around the room any time the rabbit goes to town on his drum, but there's nothing there, just empty rooms, and doors left ajar.

When Barret said the house was "isolated," he failed to mention it was on an island in a lake, out in the middle of nowhere. Isaac can't swim. Barret brushes it off: "There's a boat, isn't there?" The house is a crumbling darkly-lit nightmare-scape. Damian Draven's production design is a huge contribution. The interior appears to be reverting to nature, the lake water, the vines, the surrounding trees, all pushing to reclaim it. You can practically smell the dank air in that house. The young woman is nowhere to be seen at first. There's one more "caveat," and it's worse than the first. Barret informs Isaac that during his stay he must wear a leather harness attached to a long chain; the key will be kept out of Isaac's reach. This will limit Isaac's movements in the house, thereby helping to calm Olga's rampaging paranoia.

A rational person would tell Moe to stick his job offer where the sun don't shine. But gentle Isaac is battered down by his circumstances, and after getting a glimpse of Olga (Leila Sykes), crouched on the floor covering her face, he agrees to wear the harness. Isaac's "choices"—i.e. agreeing to take the job in the first place, disobeying the orders Barret gave him, choosing to go into the dark basement to see what might be down there, the whole nine yards—strain credulity, but Mc Carthy knows what he is going after. "Realism" and "understandable" choices are not what interest him. What interests him is the atmosphere in that terrible house. He prioritizes mood and setting, and he puts the jagged emotional states of his two main characters front and center. All else fades away.

As Isaac explores his surroundings—as much as he can in the harness—he tries to interpret the weirdness of everything he sees, hears, and experiences. When Olga first appears, she's holding a gigantic crossbow, like Burt Reynolds in "Deliverance," and she's an intense presence, droning stories to Isaac about her parents, both of whom are gone. Her father was claustrophobic and recently committed suicide. Her mother was completely mad and has recently vanished. Olga has no nostalgia for her parents, and the few flashbacks we get of her childhood, galloping in on the present day scenes with nary a warning, are very disturbing, particularly since they unfold without sound.

Richard G. Mitchell's superb score pulses and sweeps underneath the action, making something as benign as opening a door into a hair-raising event. The score is not over-used. On the contrary: there are long periods where the music drops out entirely. The music's absence is almost as unnerving as its presence.

Sykes is offscreen for long periods of time, but you always feel her in the film, hiding in the rooms upstairs, lurking just outside the door. Her dissociated attitude and deadpan voice, even when wielding a crossbow, adds to her eerie affect. She is a legitimately frightening presence. And Jonathan French, making his feature-length debut, is a gentle thoughtful everyman, troubled by the blank slate of his mind, the holes in his memory, never sure if what he sees is reliable.

Mc Carthy shot "Caveat" on the proverbial shoestring, and this is in the film's favor. The darkness and long stretches of stillness create a palpable spookiness, a prolonged state of anxiety, without relying on any special effects, or quick-cut fancy camera moves. The film is nerve-racking, and a reminder of how much can be done on a low budget if one is inventive enough, certain enough in the story one wants to tell. 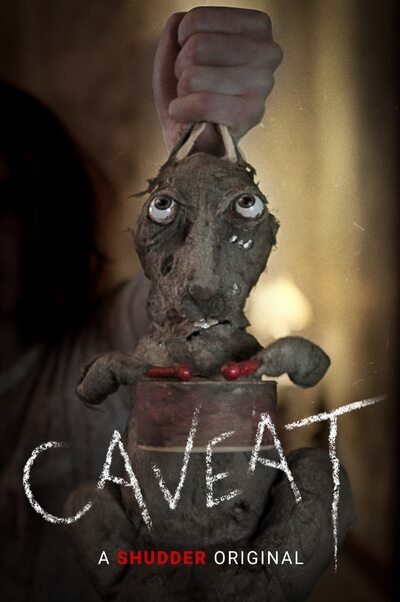