At its best, the ho-hum Irish gothic chiller "The Lodgers" made me wish we lived in a world where this type of film wasn't so rare that its very existence wasn't a source of novelty. Imagine a world where "Crimson Peak" was a hit (and a little better), one where the recently revived Hammer Studios cranked out a lot more where "The Woman in Black" and its surprisingly strong sequel came from. In this imaginary context, you can see how a film like "The Lodgers" needs to be better than a great mood in need of a decent story and stronger characters.

The one thing that the makers of "The Lodgers" do deliver is a unique setting. Welcome to Ireland in the early 1920s, presumably 1920 or 1921. Soldiers are returning home from the Irish War of Independence, and the seeds for the impending Irish Civil War are starting to blossom. Good-natured Irish vet Sean (Eugene Simon) bears the brunt of this unbalanced allegory since he returns home to find that he's no longer welcome. The British and the Irish now have a wary truce, and local bully Dessie (Moe Dunford) doesn't like that. In fact, Dessie speaks for his home-town when he calls Sean a "traitor."

Unfortunately, "The Lodgers" isn't Sean's story. His very presence upsets the emotional balance between creepy shut-in siblings Edward (Bill Milner) and Rachel (Charlotte Vega). Edward and Rachel are, unfortunately, rather boring. A family curse forces them to spend (most of) their time inside their moldering family estate. He mostly wrings his hands, and acts out fearfully since he doesn't want to offend the ghosts that keep him trapped in his own home. After all, this haunted house has generic rules (ex: no visitors!), and while she has gotten sick of them, he's pretty much resigned to his fate. This is an archetypal plot, one that could have easily worked with greater finesse, ambiance, or general attention to detail.

Alas, "The Lodgers" just sits there. Each successive plot point feels so passion-less, and paint-by-numbers. Sean's presence soon leads to a halting romance with Rachel. Which in turn leads her to become emboldened. So Edward gets mad at her. And she has to assert herself even further by fighting him, and the traumatic family memories that plague her. There's a struggle. And a little trapdoor, from which blackish-blue water bubbles forth menacingly. A dead body here. Some dark shadows there. A few intimations of incest and domestic violence. And voila, you've got a gothic romance rendered with all the panache and soulful-ness of a Bob Ross painting, complete with an unhappy little pond, and some unhappy little period costumes.

"The Lodgers" disappoints on a number of levels, many of which have more to do with the limitations of its creators' imagination than the apparently minuscule budget. The performances are uniformly undistinguished, save for Vega, who does a lot with a few pregnant pauses, and over-the-shoulder glances. The cinematography is mostly uninvolving, as is the natural lighting and cheap-looking sets. And the scenario gracelessly stumbles from one plot point to the next without ever spending enough time to get you to believe that these fairy tale archetypes are real enough to be worth caring about.

I really wanted "The Lodgers" to be as good as its best isolated moments. I love so many tropes that define the film's world, from the town's civil, but scowl-y general store manager to Rachel's favorite willow-tree-lined pond. I like Dessie, even if Dunford doesn't do anything more taxing than strut around with his hands in his pockets, and lurk menacingly around country roads and public squares. I even liked aspects of Edward, a character whose insecurities are only interesting once he's nervous enough to be an Edgar Allan Poe character (what's that infernal sound coming from underneath the trapdoor?).

But the movie in my head never matched the one on screen. I imagined a film where Sean and Rachel's budding attraction was more centrally grounded. One where his resentment at coming home to an ungrateful motherland wasn't simply one detail on a checklist of character traits. Where her attachment and interest in him didn't feel like a rote extension of her need to get as far away from her brother as possible. I also fantasized about a story where the house's ghosts had personality beyond a single plot twist that should, though the gift of hindsight, shed a much stronger light on Edward and Rachel's relationship.

"The Lodgers" doesn't even improve the more you think about it. I wish it did, because little horror films need love most of all. The best thing I can say about this film is that it might interest you if you're already invested in this type of story. But beyond that? I wish "The Lodgers" were better. 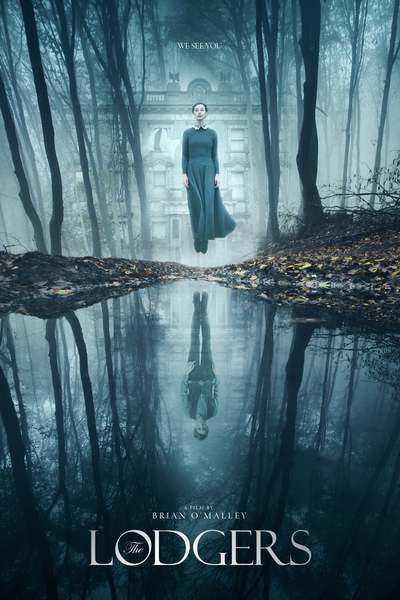 Rated R for some violence, sexuality and nudity.