Corin Hardy ran the risk of overselling supernatural horror film "The Hallow," his debut feature, by describing it as a cross between "Straw Dogs" and "Pan's Labyrinth." But Hardy's film is more like another acknowledged influence: Sam Raimi's "The Evil Dead." Like "The Evil Dead," "The Hallow" takes place in an isolated cabin-in-the-woods setting, and has a highly satisfying preoccupation with practical creature/make-up effects. "The Hallow" also de-emphasizes human drama to the point where it often feels like a Jenga tower of set pieces, a disappointing fact that's most apparent during the film's first 40 minutes.

Still, once you get over that hump, "The Hallow" is mostly compelling thanks to its over-determined focus on the shape and texture of its central haunted house location, especially waxy mottled skin, pus-and-blood-infected wounds and rapidly-putrefying wood-floorboards. "The Hallow" isn't fueled by the same manic energy as "The Evil Dead," so it understandably flags whenever it's not mining deep pockets of unnerving violence. But when the film is fixated on body horror transformations and home invasion thrills, "The Hallow" earns comparisons to Raimi's genre milestone.

Since characters ultimately feel incidental in "The Hallow," the slowest part of the film is its set-up. We spend a lot of time with Adam (Joseph Mawle), an arborologist investigating a mysterious black fungus, and his wife Clare (Bojana Novakovic), but never really learn what makes them tick beyond skepticism and love for each other. Hardy and co-writer Felipe Marino take their sweet time in setting up Adam's research and the hostile natives that warn him against poking around an Irish forest—one supposedly haunted by banshees, sprites and other menacing fairy tale monsters. Still, Adam persists, and sure enough, he, Clare and their child are subsequently attacked by various creatures of the night.

You'll probably be in the dark about the exact mythology and meaning of these creatures unless you're already familiar with Irish folklore. But by the time "The Hallow" gets going, its story is blessedly simple: Adam and Clare must save their child from being abducted by monsters, although Adam's priorities gradually shift after he is infected by one of his attackers.

At this point, "The Hallow" becomes the kind of horror film that routinely screens on VOD and in limited theatrical release thanks to indie film distributors like IFC Midnight: high on atmosphere and chills, but only passable when it comes to anything beyond surface-deep emotional content. It's almost there, but just shy of greatness.

The good news is: there are several scenes in the film that suggest Hardy put a lot of care into filming computer-enhanced practical effects. Many of the best attack scenes combine the precision of high-quality M. Night Shymalan-style jump scares, and Lucio Fulci-style gore effects. You'll dutifully squirm when characters experience eye-related trauma, or when the fungus that Adam investigates spreads throughout the house right before monsters attack. But when "The Hallow" slows down long enough to center on characters talking, the film falters just enough to make you wonder how long you'll have to wait for the next scare scene.

On a micro-level, "The Hallow" gets the job done. Hardy and his crew suck viewers in with pulpy wet sounds of flesh popping open, or dead wood splintering. The simple pleasure of watching filmmakers take time to linger on properly lit make-up effects may seem slight, but it goes a long way when you stack "The Hallow" up against its competition. Pick out any number of horror titles that came out this year, and see how well Hardy films his monsters in comparison. These scare scenes aren't just competent—they're consummately disgusting and appreciably creepy, too. 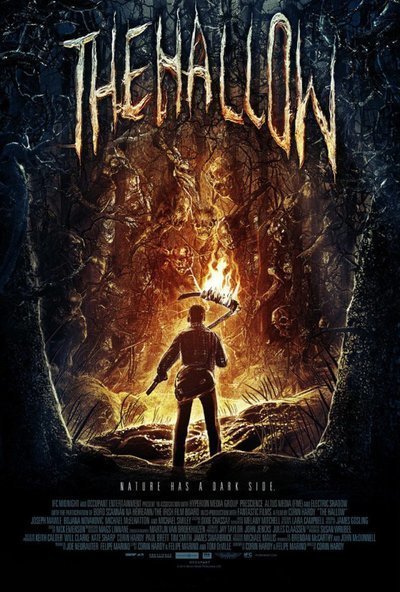