Horror anthologies are hit-and-miss efforts by nature, with some short films in a collection working far more effectively than others, depending on your tastes. You can’t please all of the people all of the time, right?

But “XX” feels unusually frustrating in its inconsistency, given its inspired premise. Four women directed four short horror films, each with a woman at its center. Each stakes out a very different space within the genre from a wide variety of perspectives and voices. It’s a great idea, especially since the horror field tends to be so male-dominated.

While each segment has its moments, though, none of them are completely satisfying, and only one of them truly comes close to hitting its intended target. There may be a vague through line about upending the traditional female roles of mother, wife and caretaker, but if “XX” is trying to make some sort of statement, it’s not doing so with much clarity or power.

Actually, the interstitials that serve as the film’s creepy connective tissue are the best parts of all. The work of Mexican stop-motion animation artist Sofia Carrillo, they feature disturbing images of doll parts moving about on their own in a dilapidated mansion. Hands crawl around, eyes blink open and closed and moths flutter menacingly. Eventually, it’s clear that they don’t have much to do with the shorts themselves, but they’re vividly tactile and beautifully eerie.

We begin with “The Box” from director Jovanka Vuckovic, based on a short story by Jack Ketchum. A mother (Natalie Brown) takes her young son (Peter DaCunha) and daughter (Peyton Kennedy) into Manhattan for a day of fun just before Christmas. On the train ride home, the boy takes a peek inside a shiny, red gift box a fellow passenger is holding; what he sees quietly stuns him. Once they return to their suburban idyll, he refuses to eat, politely insisting he’s not hungry—but whatever is eating him slowly spreads throughout the family. Vuckovic’s film is moody and filled with dread, and she sharply depicts the ways in which a husband and wife can be at odds with each other over how to handle a family crisis. But “The Box” ultimately leaves you hanging, despite spelling out in narration the mother’s obvious sense of loss and confusion.

Next up is the quirkiest and most ambitious of the four films in its contrast of tones. “The Birthday Party” from Annie Clark—better known as the musician St. Vincent—stars the always-lovely Melanie Lynskey as a harried mother named Mary. She thinks she’s planned the perfect birthday party for her 7-year-old daughter (Sanai Victoria). But something is clearly off, despite the chic, immaculate nature of Mary’s midcentury-modern home. Her brooding nanny (Sheila Vand) puts her further on edge with her mere presence. But then, making matters significantly worse, Mary finds her husband dead in his study—and Clark plays it all as high farce. As Mary scurries to hide the body, Clark amps up the dark comedy within this surreal situation with jump scares and her own overbearing score. It’s a nightmarish vision of domestic comfort full of overbearing neighbors and an unsettling use of slow motion. But while it’s amusing here and there, it never quite clicks.

The third segment, writer/director Roxanne Benjamin’s “Don’t Fall,” is the most traditional, straight-up horror film of the series, but it’s also the weakest link. Four friends go on a camping trip in the desert, with the two obnoxious men alternating between playing unwanted pranks on their female companions and mansplaining everything to them. But in the middle of the night, one of the women (Breeda Wool) ventures off on her own to investigate a strange sound, with gruesomely bloody results. “Don’t Fall” features some visceral creature effects—especially given what must have been the film’s meager budget—but we never get to know the characters enough to care about their fates. It ultimately feels like a decently made but rather empty genre exercise.

But “XX” ends strong with “Her Only Living Son” from the most established of the four filmmakers, Karyn Kusama, whose “The Invitation” was a horror highlight last year. Christina Kirk stars as Cora, a single mom living with her teenage son, Andy (Kyle Allen), in a modest house in the middle of nowhere. She struggles to support them as a waitress, and they have little contact with the outside world besides her work and his school. She routinely rejects the friendly overtures from her handsome mailman (Mike Doyle); it’s clear she lives only for her son. But as Andy turns 18, the true nature of who he is—and why they live such an austere, cloistered existence—begins revealing itself in dark, chilling fashion. This is the best-made, strongest acted and most cohesive of the four shorts. It’s the only one that’s truly, deeply disturbing. And it has the clearest thematic execution in its depiction of maternal sacrifice. 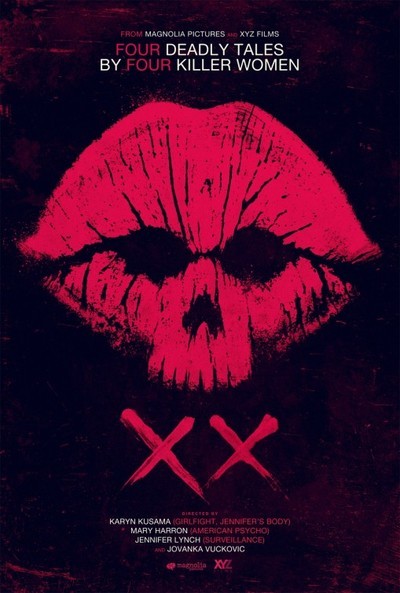 Rated R for horror violence, language and brief drug use.

Christina Kirk as Cora (segment "Her Only Living Son")

Mike Doyle as Chet (segment "Her Only Living Son")

Kyle Allen as Andy (segment "Her Only Living Son")

Brenda Wehle as Principal Jenks (segment "Her Only Living Son")

Michael Dyson as The Man (segment "The Box")

Curt Cornelius as Dr. Roman (segment "Her Only Living Son")

Lisa Costanza as Cora-Waitress (segment "Her Only Living Son")

Ruben Pla as Male Patron (segment "Her Only Living Son")

Editor (segment "Her Only Living Son")

Editor (segment "The Birthday Party," "Her Only Living Son")