“The Invitation” is a dinner-party-from-hell scenario best served as unspoiled as possible. After all, a psychological thriller built upon slow-simmering tension is only as good as its surprises. Therefore, I will refrain from any major bean spillage and provide what I think is just enough to get you hooked.

However, there is one element of note that can be revealed and celebrated without peril. Filmmaker Karyn Kusama has at last fulfilled the promise she showed in her knockout feature debut, “Girlfight,” a pugilistic coming-of-age drama from 2000 that also launched the career of its scrappy star, Michelle Rodriguez. With “The Invitation,” Kusama appears to have gotten her lean-and-mean vision back into focus, one that went astray with 2005’s female-driven action flop “Aeon Flux” and 2009’s Diablo Cody-ized, flesh-eating cheerleader horror comedy “Jennifer’s Body.”

With backing courtesy of Gamechanger Films, which finances indie movies directed by women, Kusama seems to be freed from much of the commerce-minded constraints placed upon her by regular studios. It also feels refreshing if almost shocking that nearly all of the characters at this reunion of friends, which takes place in a sprawling mid-century-style abode in the Hollywood Hills, are in their 30s. In other words, they are allowed to be adults. No blatant pandering to the youthful demo here. Plus, the cast is casually diverse as it features both multiracial and Asian couples.

The script—written by Kusama’s husband, Phil Hay, and Matt Manfredi—divides the story’s action equally between the genders. While there is a bit of a “Big Chill” feel—grief and loss of a loved one is the film’s emotional engine—“The Invitation” is primarily an intimate, highly effective chiller in a confined space with an armrest-grabber of a payoff.

The setup immediately provides cause for anxiety. Will (Logan Marshall-Green, all haunted eyes and exposed nerves) and Kira (nicely low-key Emayatzy Corinealdi of “Miles Ahead”) driving along a twisty high-altitude road. Not without trepidation, they are headed to a gathering held in Will’s former home. It is being thrown by his ex-wife, Eden (Tammy Blanchard, all ruby red lips and clingy white gown), who he hasn’t seen in two years, and her new husband, David (Michiel Huisman, whose specialty is scruffy hunks on TV shows like “Nashville” and “Treme”).

Foreshadowing comes into play early when Will’s car suddenly hits a coyote. He puts the injured animal out of its misery by whacking it with a tire iron. Once they reach their destination, a shaken Will and Kira are warmly greeted both by their friends in attendance but also by their touchy-feely hosts. Toasting “new beginnings,” David breaks out some triple-digit bottles of fine wine and everyone gets cozy—save for Will, especially after he spies a female stranger down the hall sans pants and panties.

Turns out, there are two unknown quantities joining the festivities. Manic pixie nut Sadie (Lindsay Burdge), now wearing a mini dress, and Pruitt, an older balding man (the ever-invaluable John Carroll Lynch). David and Eden explain that they met them in Mexico where they were visiting a community—a cult as it were, where they learned to deal with trauma.

Soon enough, David hauls out his laptop and shows his guests what amounts to a recruitment video—one that ends with a rather disturbing and unexpected sequence. Will, already suspicious, now has his hackles on high alert.  When he makes the observation that Eden, David and their fellow cult members are weird, a fellow partier replies, “Yeah, they’re a little weird. But this is L.A. They’re harmless.”

Of course, similar statements were probably made about the Manson family, too.

Kusama keeps us guessing for quite a while, maybe for too long. Is Will, prone to unsettling flashbacks of life with his former spouse, just imagining things or should everyone run for their lives? Then again, Lynch has major creepy cred as the prime suspect in 2007’s “Zodiac” and Blanchard's Eden, for all her talk of tossing aside her anger, certainly can deliver one a hell of a slap when someone declares her new belief system to be “fucking crazy.” Plus, that dinner—as delicious as it looks—arrives awfully late in the proceedings. I would have been out of there hours ago, if only because of hunger pangs.

Some clues that suggest something might be afoot turn out to be red herrings. But others, not so much.

Taut pacing is, indeed, a virtue in these sorts of intense circumstances and that is one place where Kusama could improve her game. But, to her credit, she has picked her cast wisely—Marshall-Green especially, who acts as the viewer’s guide and keeps the proceedings honest without stooping to overacting. And the film ends on a clever visual note that is open to debate. In other words, this is an “Invitation” you should RSVP with a “will attend.” 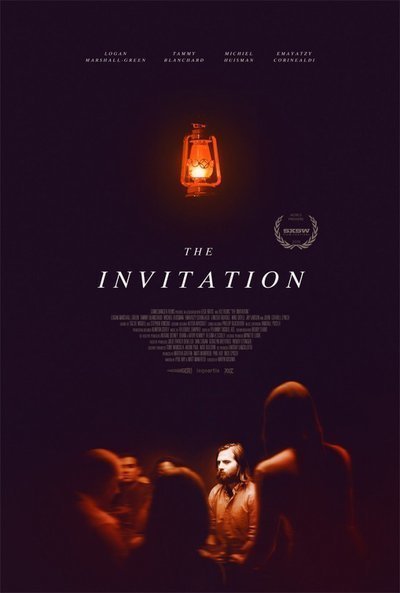 Logan Marshall-Green as Will