Most horror fans will spend the first act of “Wyrmwood: Road of the Dead” ticking off the boxes of cinematic influences. There’s a little bit of George Romero. There’s a gory splash of Peter Jackson. There’s an angled zoom stolen straight from Sam Raimi. And why does this whole thing remind me of “Mad Max”? While the fine line between homage and plagiarism may be crossed for some, debut director Kiah Roache-Turner commits so completely to the insanity of his melting pot concept that he won me over with sheer force. Adam Wingard told me that he literally dreamed up “The Guest” after watching “Halloween” and “The Terminator” on the same night. One could see Roache-Turner having a similar vision that led to “Wyrmwood” after a double feature of “Dawn of the Dead” and “Mad Max”.

“This morning I shot my wife and child with a nail gun.” This is our hero, Barry’s (Jay Gallagher) first line of dialogue in “Wyrmwood,” which should give you some idea what to expect tonally. This is splatter, blood and guts zombie mythology, filtered through an Australian horror sensibility. Roache-Turner wastes no time getting to the meat of the matter. One day, everyone who doesn’t have A-Negative blood type goes rabid/zombie/infected crazy. These are more the running/screaming/terrifying zombies of Danny Boyle’s “28 Days Later” than Romero’s hulking brood. After disposing of wife and child in the aforementioned manner, Barry teams up with a pair of fellow survivors to try and track down his sister Brooke (Bianca Bradey), who has been taken prisoner by a paramilitary group already doing experiments involving turned people and those still without a hunger for brains.

There’s a streamlined simplicity to “Wyrmwood” that’s admirable in an era when too many horror movies get cluttered with subplots and characters who wander into frame merely to be turned into goo. It’s a road movie fueled by a passion for the genre. Horror is a genre in which homage can be more easily forgiven as a product of relatable love for the same movies. Most zombie movie fans love Boyle, Jackson, Raimi, and Romero, and it’s clear from frame one that Roache-Turner is a zombie movie fan himself. We like it when our horror movies don’t feel like merchandise as much as the result of a passion for the genre to which we can easily relate.

There are also clever twists to the narrative that I won’t spoil but that keep “Wyrmwood” from feeling too much like a rip-off. The disco-loving mad scientist who seems to have been eagerly anticipating the undead apocalypse is a fantastic horror creation, and the trajectory of Brooke’s character is certainly an unexpected one. In the end though, “Wyrmwood” is not about narrative. It’s about in-your-face style, the kind where every punch, shot, and kick comes with an accompanying zoom, canted angle, and quick cut. Roache-Turner and cinematographer Tim Nagle’s camera is a character, commenting on the insanity of the action as it rises in pitch. It’s always moving (much like Raimi's and Jackson's) in time with the action, giving the piece a lively, energetic pace despite having not much of a plot when one thinks back on it.

Ultimately, the success of “Wyrmwood” comes down to confidence. Roache-Turner is like the mad doctor in the film itself, experimenting with his genre with a dance in his step and a maniacal smile. He doesn’t apprehensively lift a piece here and there from the films he’s loved, he pushes his influences to the forefront, spinning, twisting, and owning them in such a way that my trepidation at the beginning had turned to anticipation for a sequel by the end. 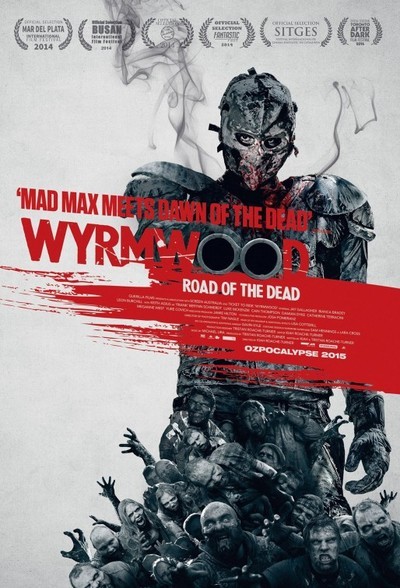 Luke McKenzie as The Captain