Laura Terruso’s “Work It” wastes no time getting to the dance floor. It opens right in the middle of the action, at a hyper-kinetic dance showcase. But the voiceover that sets the stage for this dance movie is not that of a dancer’s—at least not one yet. Quinn (Sabrina Carpenter) is your prototypical high-achieving student with a dream school or bust mentality. It’s her best friend, Jasmine (Liza Koshy), who’s a dancer with dreams of going to the New York Dance Academy while Quinn plays the cello to seniors at an assisted living facility or heads student government so she can get into Duke University.

One of Quinn’s many well-rounded activities is to work the lights for her school’s elite dance squad, the Thunderbirds, but her curated list of afterschool activities begins to unravel when she botches a performance, earning her first real rejection. In a comic—if overused—trope of misunderstanding, Quinn convinces her Duke admissions officer that she’s actually in the dance group that just fired her from running their lights. With Jasmine by her side, Quinn recruits some of the skilled misfits and nontraditional dancers among her classmates to her rival group and brings in one of their school’s most famous dancing alums, Jake (Jordan Fisher), to help her prove she has what it takes to compete on the stage and get into college.

With a similar conceit to the Dance Dance Revolution competition in “The Kissing Booth 2,” “Work It” uses a similar “smart girl uses dance contest to go to college” outline but with one major improvement. This movie promises dancing, and it delivers. There’s a dance training montage that looks similar to the one in “Footloose,” a schoolyard dance-off that wouldn’t look too out of place in “High School Musical.” It’s not the knock-your-socks off showmanship of the parkour-heavy routines of the “Step Up” series. It’s less intimidating and refreshingly, more realistic, especially since the characters are supposed to be up-and-coming high school dancers not seasoned professionals who have several nationwide concert tours under their belt.

Unlike high school “all-or-nothing” competition films, “Work It” keeps things very light-hearted.  Alison Peck’s script essentially functions as a serving tray for the dance scenes. The stakes feel so low and unthreatening, it lacks the edge of movies like “Bring It On” or “Save the Last Dance.” Quinn wants to go to Duke because her dad went there? It says nothing about what she wants to study, although her mom mentions that Quinn is interested in pre-med studies once. Even though the kooky admissions officer is little more than a walking punchline, she’s right that Quinn doesn’t stand out, not even as a character. Going to a parent’s alma mater is the same motivating factor for the characters in “The Kissing Booth 2” to set their sights on University of California at Santa Barbara—their moms went there for college—and it’s just as boring. Is that really the only way writers for Netflix originals think kids pick schools these days?

If dancing is the main course of Terruso’s film, my only wish would be that she move the camera closer to the action. I understand the impulse to shoot in a way that captures the full motion of a group of dancers. Even Fred Astaire insisted that directors film his body from head-to-toe within the frame while he was dancing. But at certain times, the camera feels too disconnected from the vantage point of the dancers, and the viewer is seated with the audience, creating a sense of distance where there wasn’t one before.

As a dance movie, “Work It” moves just fine. It gives its stars Carpenter, Koshy and Fisher moments to shine not just in dance routines but also in a few dramatic moments. The soundtrack is surprisingly solid, filled with songs you might have actually heard at a dance competition a few months ago. However, there is a weird kind of corporate synergy seeping into the movie as characters reference Beyoncé’s “Homecoming,” the Upside Down from “Stranger Things” and the emotional “Queer Eye” reboot, all of which are Netflix titles. Perhaps the streamer could listen to the advice of its own movie and let the projects they’re producing stand out on their own. 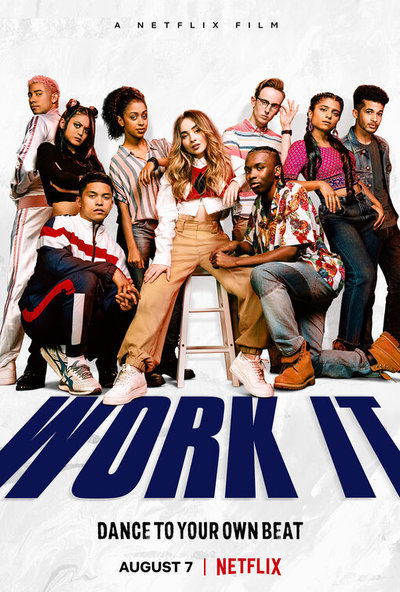