“Alright, let’s do this thing! Again!”

It’s not always the most encouraging sign for a character to yell this line in a sequel, but here we go again. “The Kissing Booth” is back with a similar premise of troubled young love but with some new twists and a few new characters. Elle (Joey King) and Lee (Joel Courtney) have thankfully repaired their tight knit friendship in time for their senior year, until Lee’s girlfriend, Rachel (Meganne Young), grows tired of Elle’s constant presence in his life. Elle clings to her best friend for company as long distance begins taking its toll on her relationship with Noah (Jacob Elordi), now a newly minted Harvard hunk studying across the country from their idyllic upscale L.A. homes and the posh prep school where they met. In the original movie, Elle made Lee choose whether to accept her relationship with his brother, Noah, or reject it and end their friendship. Now, it’s Elle who has to choose whether to follow Lee to their mothers’ alma mater at UC Berkeley or find a school in Boston so she can join Noah.

But what’s high school and first love without heaps of drama? Adding to Elle’s worries is Noah’s new college buddy, Chloe (Maisie Richardson-Sellers), a statuesque threat who seems to be getting too close to her guy. Back at school, Elle and Lee are once again in charge of the film’s namesake kissing booth, with admittedly much less fanfare this time. Their challenge this year is to find the next hot guy on campus to help them sell tickets, but the suave, singer-guitar player and dancer Marco (Taylor Zakhar Perez), like Noah before him, isn’t keen on the idea at first.

In some senses, this teen romantic comedy has it all: betrayal, jealousy, mean girls, public apologies, a video game-dance competition, a heated Thanksgiving meltdown, both romantic and sad montages set to slow pop songs. You name it. But “The Kissing Booth 2” is also fairly empty, predictable and just downright silly; a movie about cookie cutter characters in contrived situations set in a make-believe world. For some, the film will play like an escapist fantasy, maybe even a nostalgic trip back to when the biggest thing you worried about was where you were going to college in the fall. Other viewers may find its artificial sweetness and simplicity off-putting. It’s just where this movie exists, and it may not be to everyone’s liking.

With most of the young cast’s performances hovering around hyperactive levels, the rare appearance of a parental figure like Lee and Noah’s mom (Molly Ringwald) is a welcome change of pace. King, to her credit, goes all in on the role of a hopeless romantic. Maybe it’s too much at times, like when she swoons over a workout video of Marco that’s accidentally broadcast to the whole school, or when she competes against Marco on the Dance Dance Revolution-like dance game to get him to do a dance contest with her. It’s not necessary to remember every detail of “The Kissing Booth” or know much about the book series by Beth Reekles that inspired the movies, since the sequel begins with a recap to explain some of the tensions already in play. Thankfully, there’s less creepy behavior towards Elle in this sequel.

Vince Marcello, who directed and co-wrote “The Kissing Booth 2” with Jay S. Arnold, stuffs about a TV season’s worth of drama into the film’s overblown runtime. Most problems in the story could be resolved with a simple conversation, but of course, the characters are scared to talk things out, so problems repeat themselves until they hit a breaking point. “The Kissing Booth 2” is made up of what it thinks preteens might like in a film about high schoolers, although some outdated references and situations seem a bit out of step with what Gen Z are into. Speaking of which, for the most diverse generation of Americans, “The Kissing Booth 2” still looks homogeneously white except for a few background extras. The two supporting characters of color, Marco and Chloe, are both seen as competition by Elle at different points in the story and it feels a little uncomfortable to see her so threatened by their mere existence.

Because there’s an easy explanation for everything in “The Kissing Booth” universe, no grudge or feud gets too serious or lasts too long. The best that I can say for “The Kissing Booth 2” is that it’s largely inoffensive fluff, easy enough to follow even if you haven’t seen the original. Its uncomplicated outlook extends to Anastas N. Michos’ cinematography, where there’s often a faint glow reflecting the warm California sun during the L.A. scenes and a chilly grey hovering over those in Boston. You can soak in the movie’s basic premise and overacting just as long as you know this pool’s shallow. 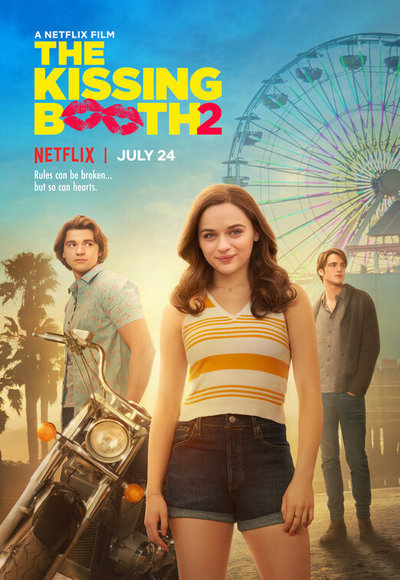 Writer (based on the book "The Kissing Booth" by)