Adapting a well-loved book for the screen is always a risky proposition. Elements that work on the page will not work visually and vice versa. Compromises must be made. You cannot please everyone. But the film version of "Winter's Tale" probably won't please anyone: neither fans of the book nor those who have never read it. It lacks visual splendor (except for one or two scenes). It lacks emotional depth. It lacks scope and magic. It is clear that there is some big battle going on between Good and Evil and that Will Smith is somehow involved, but none of it makes any sense. The philosophical underpinnings of the novel, its thoughts on the turning of the centuries (and the millennium), and how cultures and societies go through giant upheaval during such moments, visible, and invisible, is completely lost in the New Age-y dreck drenching the narrative. Not even Colin Farrell as the thief Peter Lake can save it, and he is doing his level best, with an urgent, heartfelt performance. Mark Helprin's 1983 novel is one of the most poetic of the late 20th century, and yet this film version has no poetry whatsoever.

The opening of the film flies us around through time, from the 1890s to 2014, with Colin Farrell in both eras. It is a clue that we are not entering a realistic world, but it's so shoddily constructed that it's never entirely clear what you're supposed to be looking at. In the 1890s, a thief named Peter Lake (Colin Farrell) is on the run from his former boss, a scarred monster named Pearly Soames (Russell Crowe, who seems totally adrift in this performance, hoping that a facial tic will somehow translate as menacing). Soames' black-derbied "droogs" chase Peter Lake through the Bowery, and Lake escapes via a nearby white horse who magically sprouts wings and flies over a locked gate. The visual effects are more My Pretty Pony than anything else.

Lake, who must get out of Manhattan to escape Soames, breaks into a Central Park West mansion to rob the joint before fleeing town. There, he comes across Beverly Penn ("Downton Abbey"'s Jessica Brown Findlay) in her nightgown, playing Brahms. She is a consumptive heiress with only six months to live. Her body temperature runs so high that she sleeps in a tent on the roof of the mansion, hoping that the cold air will cool her down. Beverly makes a cup of tea for the thief, and the two characters from two different worlds sit in the kitchen, talk, and fall in love.

Peter becomes convinced that he can find a way to save Beverly, and he thinks that maybe the magical white horse (now his partner-in-crime) might be able to help. He joins the Penn family in their winter retreat up the Hudson River, and passes muster with Beverly's stern father (William Hurt). Meanwhile, Pearly Soames is on his trail, but through some dark magic is not allowed to leave the boroughs of New York. He goes to request a weekend pass, basically, from the "Judge" (Will Smith), a guy with earrings lounging in a bed in a subterranean dungeon. The scene that follows between the two of them, in which they suddenly turn into snarling, snapping demons, is incomprehensible.

This is par for the course, I'm afraid. I read the book and I often had no idea what was going on in the movie, except that the growing love between Peter and Beverly is somehow threatening to the status quo and Pearly Soames must stop it. I think.

The current-day sections of the film feature Peter Lake, somehow transported to 2014, wandering around Manhattan with no memory. He comes across a kindly woman (Jennifer Connelly) who wants to help him. One might think she had other things on her mind, such her young daughter, who's dying of cancer. Peter Lake also whisks away the dying child on the winged My Pretty Pony, and then there's a scene where he has a huge fist fight with Pearly Soames on the frozen ice of the Hudson while Jennifer Connelly sobs over to the side clutching her dying daughter. Situations that should be touching become laughable.

Eva Marie Saint shows up in the 2014 section as a newspaper mogul. She has a breathtaking moment where she holds her arms out to Peter Lake. It is a beautiful reminder of her stature in American films. Her presence almost justifies the film's existence. Almost.

The romance between Beverly and Peter is the only well-done plot line. This is entirely due to Farrell and Findlay. Farrell makes the love story work. He is sincere. He makes the hero's pain at Beverly's illness palpable. When they finally make love in a tent on the roof, their passion has an emotional undercurrent that makes the sex scene about something other than sex. They connect. There is a sadness in their connection, due to the shared knowledge that it will be short-lived.

In her review of the novel, Barbara J. King describes the book as a "maelstrom-between-two-covers." and anyone who has loved the source material would probably agree. In the film, the maelstrom is gone, turned explicit and narrow. The novel has a passionate fan base and I (obviously) count myself among them. Akiva Goldsman, who wrote the screenplays for "I Am Legend" and "Angels and Demons", to name just two, adapted the book as well as directing the film. He's made a mess of it. There are a couple of beautiful images (the glowing consumption tents on the top of mansions, the frozen-over Hudson, the nighttime stroll through the snowy forest), but there is no underlying story, there is no narrative thrust, magical or otherwise.

"Winter's Tale" tells the story of a thief, a consumptive heiress, and a sentient magical white horse, but, really, it is the story of New York City in Helprin's imagination, a place like the one in reality but with some strange alterations. The Hudson freezes solid for miles, and people set up tent cities along the ice. There is a frozen magical town up-river where time takes on strange qualities. There is a whirling mysterious white cloud-wall that surrounds the island of Manhattan, a cloud-wall that everyone accepts to such a degree that no one notices it anymore. What is the cloud-wall? What does it signify? The wall is gone in Goldsman's version. In the book, it is the whole point—the reason for everything. Goldsman has missed the point of the book entirely. 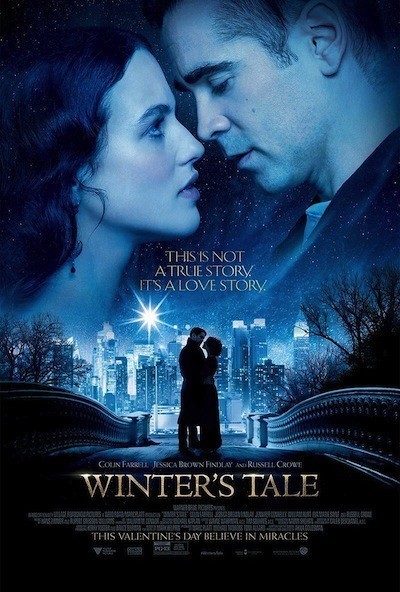 Will Smith as Judge