Multi-story feature films are not the happiest of genres, for reasons that are usually very apparent. For one, having to conclude one story and start another, over and over, interrupts the dream-like flow that most moviegoers expect of features. For another, unevenness is almost built into the form: some stories will be better than others, perhaps especially when several filmmakers are involved.

All of these inherent drawbacks help explain why Argentina’s “Wild Tales” comes as such an extraordinary surprise. Perhaps the best multi-story feature this reviewer has ever seen, the Sony Classics release, a nominee for this year’s Best Foreign-Language Film Oscar, deserves to become a serious art-house hit in the U.S. thanks to its skill in deftly overcoming the form’s usual deficits, for a result that feels as amazingly cohesive as it is relentlessly clever and entertaining.

No doubt the film has something of an advantage in that it comes from one filmmaker, Damián Szifron (“The Bottom of the Sea”), and thus reflects a singular vision and sensibility. Beyond that, it must be said that Szifron has remarkable skills as both a director and a storyteller. Each of the six stories here, which average about 20 minutes, is thoroughly enthralling, and all are united by a mordant black humor. Connected thematically in dealing with revenge and retribution, each segment sets up expectations that its successor ingeniously fulfills or surpasses.

The first, pre-credits story, “Pasternak,” gets things off to a high-flying start. An attractive young woman–a model, we soon learn–checks in for a flight and hears she won’t get frequent flier miles because someone else has paid her ticket. On board the plane, she begins chatting with another passenger and learns they both knew a guy named Pasternak, a boyfriend she dumped years ago. Then another passenger says he was the professor who failed the same guy. Could it be--? Sure enough, the plane is full of people who’ve shafted Mr. P. And who’s that locked in the cockpit?

In “The Rats,” revenge is a dish best served with ketchup. When a grumpy man enters an empty roadside restaurant one night, the young waitress recognizes him as a corrupt official who drove her father to suicide. Sure, she’d like to see the world rid of him, but she’s not inclined to do anything about it until the diner’s gruff, elderly woman cook urges that it would be as simple as loading the guy’s fries and eggs with rat poison. The waitress is morally torn, but there’s also a practical question: Once rat poison is past its expiration date, does it become more or less potent?

The element of class conflict grows more pronounced in “Road to Hell,” which plays like a more macabre version of Spielberg’s “Duel.” Riding down a remote highway in his snazzy new sports car, a sleek corporate type passes a slow pickup truck and shouts insults at its grizzled, back-country driver. Naturally, the city slicker has a flat just a few miles down the road, and the first vehicle to appear in his rear-view is the scorned pickup. What ensues is apocalyptic (and droll) enough to tickle Rod Serling.

The film’s last three stories are more expansive, complex and sharply edged in social satire. In “Bombita,” a demolitions engineer stops to pick up his daughter’s birthday cake and comes out to find his car towed – though the space wasn’t marked a tow-away zone. In the coming weeks, as his marriage begins to collapse, the enraged citizen seeks justice for his parking woes, and finds himself surrounded by fellow Argentines furious at “fascist” bureaucratic stonewallers. Is it possible his skills with dynamite might turn the engineer into a combination of Frank Capra hero and Che Guevara? In this land, it seems, anything but bureaucratic responsiveness is possible.

Its premise recalling Paolo Virzi’s recent “Human Capital,” “The Deal” starts out with a rich couple learning their teenage son has run down a pregnant woman the night before. Frantic, the father and his lawyer come up with a scheme to pay his poor gardener a half mil to take the rap. But then the lawyer, who demands a half mil for his services, brings the prosecutor into it, which will cost another mil, plus payoffs for the police… No wonder poor dad tells them all to go to hell, then realizes that his only real out involves something he’s in fact very skilled at: negotiation.

It might seem at this point the film couldn’t top what’s come before, but not to fear: “Till Death Us Do Part” is a corker. While previous tales hinge on enmity or distress, this one starts out with celebration and love. At a fancy wedding reception, the guests are giddy, the bride and groom enveloped in bliss. Until, that is, she discovers he’s cheated on her with a woman in the room. At first, she flees to the roof, weeping and suicidal. Then the prospect of vengeance hardens her, and soon he’s the one who’s groveling and sobbing. The reversals of emotional fortune continue until it seems we’ve just seen a decade of marital turmoil play out in one convulsive evening.

Any of these tales separated from the whole could surely win prizes at short-film competitions. Together, their collective impact proves the synergistic effect of true artistic vision. With a confident, coolly elegant visual style somewhere between Demme and DePalma, Szifron emerges from “Wild Tales” an international auteur to be reckoned with. 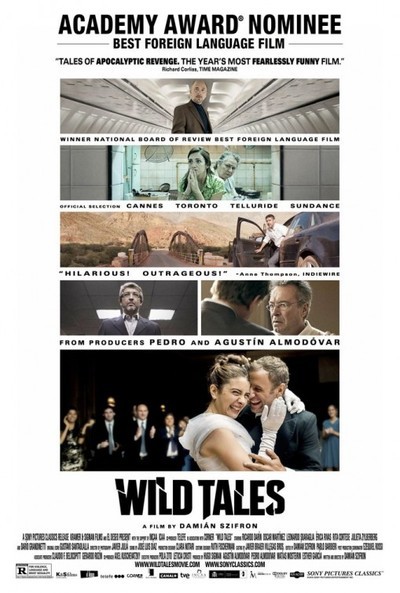