There’s a great—or maybe just better—drama somewhere in the pre-WWII Japanese period drama “Wife of a Spy,” a low-simmering psychological thriller about Satoko Fukahara (Yu Aoi) and her mysterious husband Yusaku (Issey Takahashi). Most of that greatness is already present in writer/director Kiyoshi Kurosawa and co-writer Tadashi Nohara’s adaptation of Ryusuke Hamaguchi’s scenario. But their story isn’t as interesting as Satoko.

Kurosawa (“Pulse,” “To the Ends of the Earth”) typically focuses on sustaining a mood of disquiet, which goes a long way in this otherwise tidy melodrama about Satoko’s inevitable disillusionment and frustration with being married to (you guessed it) a spy.

Set in Kobe sometime in 1941, Satoko’s story ultimately concerns women like her, and how they’re first degraded and then dismissed to background roles in the theater of war. That hardtack narrative doesn’t seem to interest Kurosawa so much as the sensory details that hint at Satoko’s inner conflict: the rattle of windows, the glare of natural light, and the drift of human feet, on their way to parts unknown. The rest of “Wife of a Spy” can’t keep up with Aoi’s restless heroine.

In “Wife of a Spy,” Yusaku mostly exists as the object of Satoko’s quest. He’s always just out of reach, even when he’s talking to or sitting before her. She suspects he’s having an affair, which makes sense given how much dramatic stress Kurosawa puts on a brief scene where Yusaku, after returning from a business trip, embraces Satoko while also staring right at the equally secretive Hiroko (Hyunri). Hiroko soon turns up dead, which reduces her to another piece of Yusaku’s puzzle.

But really, Yusaku is Satoko’s problem to solve, as we see in establishing scenes where she tries to investigate and understand Yusaku. She learns some things about her husband by talking to his nephew Fumio (Ryota Bando), a disillusioned young man who resigns from Yusaku’s import/export company in order to write about his experiences in Manchuria. Manchuria’s mainly important to the plot as a foreign destination (though there’s obviously also some spy stuff going on there): Yusaku likes traveling there because “everything’s cheap,” in his words. So it makes sense that Yusaku “[wants] to see it one more time” before the war escalates further. Fumio, on the other hand, doesn’t care much for Manchuria. "His adventurous spirit got ... fired up" there, according to Yusaku, and there’s obviously a lot more to that story.

Still, Fumio’s baggage is only so important to Satoko’s quest to understand Yusaku. She persists in asking questions, about Yusaku’s activities abroad and his connection to Hiroko, but constantly encounters resistance. That’s the most compelling thing about “Wife of a Spy,” the flickering clarity that illuminates her formerly ingratiating male acquaintances, like Fumio, Yusaku, and even childhood friend Taiji (Masahiro Higashide), the last of whom now serves as a military police chief. Taiji is ultimately reduced to his uniform, as an early conversation with Yusaku suggests. “I’m in uniform, but I dislike arresting people,” Taiji tells Yusaku.

“But that’s your job,” Yusaku replies after a long pause. The pause is what makes the scene dramatic, not the dialogue.

Unfortunately, even the most insinuating conversations steer Satoko back towards a frustrating, clichéd understanding of Yusaku as a product of war. Fumio suggests that “perhaps in ignorance there’s a glimmer of hope,” but there’s not much to Fusaku’s relationship with his country—he explains his conflicted emotions plainly in a neat little speech—or how it affects Satoko (poorly, obviously). He’s a canvas for her to project her emotions onto, but there’s only so much room for expressive details in this crowded, but uncomplicated narrative.

Too much of Kurosawa’s movie feels like a retro procedural whose mysteries are often explained away as soon as they're hinted at, as in a tense dream sequence where Satoko imagines a secret rendez-vous between Yusaku and Hiroko. The lights are low enough, and the trysting lovers certainly sound menacing; they don’t seem to notice or care about Satoko, and their laughter echoes loudly on the soundtrack until the scene ends. But not much about this scene requires our interpretation. It’s very much what it looks like at a glance.

Still, there are hints at a genuinely alluring, emotionally complex work throughout “Wife of a Spy,” like when family friend Dr. Nozaki (Takashi Sasano) suggests that “information cannot be trusted these days.” He could be talking about the silent movie that Satoko and Fumio star in, though that movie doesn’t really matter to the plot beyond a peripheral scene or two. The rest of the “Wife of a Spy” piles on too much unnecessary information, making it impossible to get lost in its plot’s distracting convolutions. Because a man who is his uniform isn’t any more complex than a man who wants to escape his country, and a woman stuck in the middle doesn’t have many places left to go. 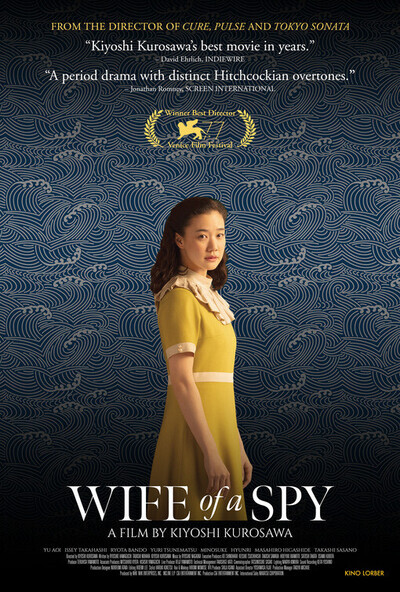