Who You Think I Am

Safy Nebbou’s “Who You Think I Am” is not what it first appears to be. It’s a Russian nesting doll of intentions, betrayals, and self-delusions that presents its story of deception in a manner that's constantly surprising. There are few too many twists and turns in this thriller for its own good, and scenes in the first half that almost feel like they’re underlining and discussing the themes of the film lead to a sense that the project is both pretentious and overwritten. However, in every scene of this movie that she's in, which is almost all of them, Juliette Binoche reminds us why she’s one of the best actresses who ever lived. She has delivered time and time again for decades now, with no signs of slowing down, and it’s rare for a project she headlines to disappoint. She’s as reliable as they come.

Binoche plays Claire, a 50-ish professor of French literature (writers Nebbou and Julie Peyr will too often name drop and reference French Lit classics in a way that seems too self-aware, by the way). She divorced the only man she loved, Gilles (Charles Berling), not too long ago and juggles shared custody of their two sons with being back in the dating world. To that end, she has a much younger boyfriend named Ludovic (Guillaume Gouix) but learns early in the film that he kind of sees their relationship as a more casual thing than she does. When he blows her off, she develops an interest in Ludo’s roommate, another young man named Alex (Francois Civil), but she develops their partnership in a way that feels designed to insulate her from the same kind of harm. She catfishes him.

It starts with a photograph on a Facebook profile and leads to phone conversations in which Claire claims to be half her age. Claire and Alex become increasingly emotionally and sexually attached, even though she’s living a lie. All of this unfolds as a story being told to a new therapist named Dr. Bormans (Nicole Garcia), and those early therapy scenes have a habit of being a bit shallow. Yet through all of it, there’s Binoche, adding so much more nuance and subtlety than other actresses would have ever even considered. She finds a way to make Claire both confident and vulnerable at the same time. After all, what she’s doing hints at a deep insecurity, but it also takes nerve to form a relationship with a young man whom you’re deceiving. She’s such a fascinating actress and her work alone makes “Who You Think I Am” worth a look.

Without spoiling, Nebbou's film is not really a sad story of a heartbroken middle-aged woman who makes a mistake on the internet. That’s an inciting incident to explore something much more complex about the stories we craft in relationships, both to our partners and to ourselves. The second half of “Who You Think I Am” sometimes feels like the kind of material that worked better on the page (it’s based on a novel by Camille Laurens), wherein its constantly shifting realities and personalities don’t have to be captured so literally. Having said that, Nebbou does an admirable job of taking a very complex, ambitious piece of storytelling and conveying what really matters thematically and narratively. It’s mostly there in the title, although this isn’t just a story about the lies that we tell others—it’s as much, maybe more, about the lies we tell ourselves. 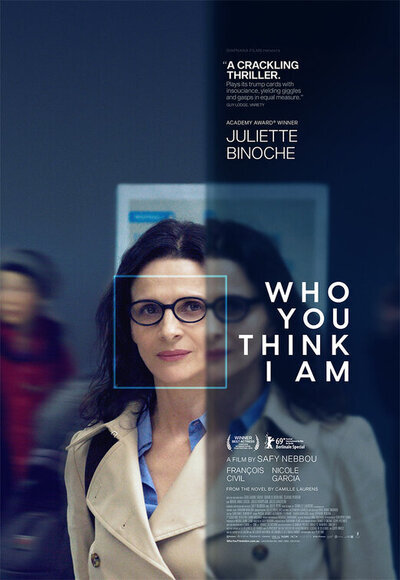