“We have decided to move into our house because my father—my father—he earned it for us, brick by brick.”—Walter Lee Younger (Sidney Poitier) in Lorraine Hansberry’s masterpiece, “A Raisin in the Sun”

A recurring visual utilized by speaker Jeffery Robinson in Emily and Sarah Kunstler’s sobering documentary, “Who We Are: A Chronicle of Racism in America” is that of a ball reaching a tipping point, mere centimeters away from achieving real progress until it is forced to slide backward. One of the key historical instances of this recurring setback is the assassination of Dr. Martin Luther King, Jr., which occurred in Robinson’s hometown of Memphis, Tennessee, before the civil rights leader had the chance to deliver a speech entitled, “Why America May Go to Hell.” Soon afterward, the homes in the Black neighborhood where Robinson’s family lived were bought up, prompting his father to make a deal with the developer. This resulted in Robinson’s family, not unlike the one in Hansberry’s play, purchasing a new house in a white community, thus ensuring that he and his brother would receive the good Catholic education their parents desired for them. Robinson vividly recalls how their next door neighbor was about to bring them his cherished dessert of chocolate chip cookies, until she realized that his family was not, in fact, “the help.”

It was his “unicorn parents” combined with pure luck that Robinson credits for the road that led him to graduate from Harvard Law School and serve as a deputy legal director of the ACLU. Despite receiving the best schooling that the American education system could offer, Robinson was shocked by just how much was left out of the history books, thus inspiring his titular one man show, which we see him performing on Juneteenth 2018 at New York City’s Town Hall Theater. Just as Al Gore detailed the inconvenient truth of global warming and the devastating impact it is currently having on our planet, Robinson is sharing a mightily uncomfortable one that the subsequent years have only magnified. Both “An Inconvenient Truth” and “Who We Are” call for urgent foundational changes in how we live our lives, and neither film is the dry lecture it might seem to be upon initial glance. Robinson is matter-of-fact, thoughtful and enormously compelling in illustrating hidden chapters of our shared history, such as the 1921 ethnic cleansing in Tulsa, which many people first heard of thanks to HBO’s brilliant 2019 series, “Watchmen,” with its bold yellow lettering that was later echoed in Black Lives Matter street art.

Emily Kunstler’s editing effectively juxtaposes Robinson’s presentation with footage of him visiting subjects in various corners of the country, including the delightful Lessie Benningfield Randle, a 107-year-old survivor of the violence in Tulsa, which was sparked by the attempt of citizens in Greenwood, an enclave dubbed “Black Wall Street,” to prevent a lynching. Only the steps to the city remain, a chilling reminder of a trailblazing community that was never rebuilt. Robinson argues that such atrocities, including the estimated 4,000 racial lynchings that occurred in the century following emancipation, could only have been allowed as a result of “acquiescence or direct involvement” on the part of law enforcement. His observation that modern day police departments were originally formed as slave patrols serves as a segue to his interview with the mother of Eric Garner, who believes her son to be a sacrificial lamb. His murder at the hands of officers is one of countless modern tragedies that affirm how the law relieving the killing of an enslaved person from being deemed a felony is still being upheld.

The film is guaranteed to leave you questioning why a slaveholder like Andrew Jackson remains on the $20 bill, why Francis Scott Key’s “Star-Spangled Banner”—a verse of which celebrates the murder of enslaved people—is our national anthem and why the request for reparations are ever questioned, especially in light of Lincoln’s Compensated Emancipation Act, which compensated slaveholders to the tune of $1 million for their “lost property.” One of my favorite images in the film is that of a few appropriately withered flower bouquets sympathetically affixed in the fence surrounding the space where a statue of Confederate General Nathan Bedford Forrest was removed, thanks to the efforts of activist Tami Sawyer. Robinson reminds us that John Ehrlichman of the Nixon administration did not mince words when admitting that the notorious “war on drugs” was simply meant to disrupt communities that the government felt was a threat, linking hippies with marijuana and Blacks with heroin. What prevents this film’s stomach-churning history lesson from numbing our senses is Robinson’s ability to make himself a vulnerable human presence on camera, such as when he admits to being disappointed by his own results in Harvard’s Implicit Association Test, which indicated that he has a negative impression of Black men like himself.

An emotional highpoint of the picture occurs during Robinson’s trip back to his former St. Louis Memphis Catholic School, where he and his brother became the first Black students to be enrolled there. His former basketball coach, Richard Orians, tearfully recounts how he attempted to protect Robinson from the racist vitriol being voiced in Walls, Mississippi, after they travelled there for a game. Robinson even gives a Confederate Flag-waving man in South Carolina the chance to state his case, thus removing any shadow of a doubt that his convictions have trumped any threat of knowledge. Viewers who are skeptical that white supremacy is being normalized in U.S. classrooms should look no further than the proposed Indiana State Senate Bill 167, which removes the right of instructors to teach that the Nazis and similar political parties are “of a low moral character.” “Who We Are” should be made required viewing in every American school as we find ourselves perched, once again, at a pivotal tipping point. The hope found in activists of all races demonstrating together in the midst of a pandemic is underlined by the joyous gospel music over the end credits. It is Robinson’s aim to guide our eye in seeing the truth of our past that is so often overlooked. This is perhaps most indelibly expressed by the fingerprints left in walls throughout Charleston by the enslaved people who built our cities, our economy and our country, brick by brick. 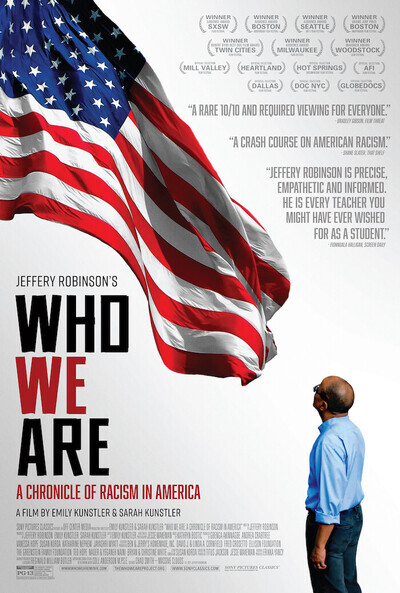 Jeffery Robinson as Self