A child changes everything, or so the familiar parenting adage tells us. For the main character in Richard Linklater’s new film “Where’d You Go, Bernadette” becoming a parent not only changed her lifestyle; it seeped into her art, career and changed her as a person in the process. It’s a theme worth exploring deeply—especially as more women are sharing candid stories from the frontlines of motherhood—but unfortunately, it’s not given its proper due in the movie’s try-hard script.

As pieced together from voiceover narration and an unbelievably high-quality video essay, Bernadette Fox (Cate Blanchett) was once a rising star in the architecture world. However, after one crushing professional setback and a fraught transition into motherhood, she retreated into the confines of a stately old mansion in Seattle with her husband Elgie (Billy Crudup) and their precocious daughter, Bee (Emma Nelson). When the now teenaged Bee asks her parents for a trip to Antartica, it sets off a panic in the agoraphobic recluse, causing an avalanche of problems that sends her off on a journey towards self-rediscovery—without her family knowing quite where she’s taken off to.

Based on Maria Semple’s book of the same title, the movie version of “Where’d You Go, Bernadette” shifts the perspective of the story from Bee’s search for her runaway mom onto Bernadette’s shoulders. However, this character is not interested in making it easy for the audience to empathize with her. Linklater can’t seem to strike the right tone for Bernadette’s story, so in some moments, she’s comically ill-equipped to handle the slightest of domestic chores and foists a number of her personal tasks on an unseen digital assistant based in India. Then when her helplessness and anxiety are portrayed in a more tragic light, it leaves a guilty aftertaste for viewers who laughed at those earlier scenes. Add in Blanchett’s barbed performance as a woman on the edge of needing a mother’s little helper just to pick up her kid from school, and that’s yet another layer on the already conflicted movie. At times, Bernadette can be casually racist to her digital assistant and her holier-than-thou attitude towards just about everyone else feels less like a defense mechanism and more of a justification for treating others dreadfully. In her eyes, they don’t deserve better and that goes double for Bernadette’s arch-nemesis, her PTA-obsessed neighbor, Audrey (Kristen Wiig). It’s tiring keeping track of the movie’s number of mood swings.

Perhaps inadvertently, “Where’d You Go, Bernadette” also becomes a study of a difficult artist who hates just about everyone who isn’t her daughter. Almost everyone else in the movie tolerates her because she’s an avowed genius in her field. Others (sometimes rightfully) despise her because of her behavior. But will the pass for creative men with bad attitudes be offered to Bernadette as well? Usually, what endears these kinds of prickly antiheroes are some sense of pathos, something to connect with or feel for, but this movie doesn’t offer enough to explain or absolve Bernadette’s actions. By the time the credits roll to the well-worn tune of Cyndi Lauper’s “Time After Time,” I’m not convinced Linklater knew where his movie should end or what he wanted to say by telling this story.

Nor does there seem to be a clear visual style beyond constant grey and rainy skies hovering over the movie’s version of Seattle. It’s not that it’s terribly shot by cinematographer Shane F. Kelly, it’s that it’s so blandly competent, it barely feels like a Richard Linklater film. His movies tend to feel so much more empathetic towards their characters. From the blossoming romance between characters played by Julie Delpy and Ethan Hawke in the “Before” trilogy, the rowdy college boys of “Everybody Wants Some!!” and even the unserious substitute teacher played by Jack Black in “School of Rock,” these worlds in these movies reflected the stories playing out on Linklater’s stages. That that connection is missing in “Where’d You Go, Bernadette” speaks to its discord.

Perhaps its the present day fatigue that makes this movie about a wealthy white woman who abandons her family to find herself feel so terribly out-of-place. Bernadette lives in a very comfortable bubble: her family owns their home, she’s married to a supportive husband with a high salary job at a tech company (Microsoft, in case they don’t say it enough times in the script co-written by Linklater, Holly Gent and Vincent Palmo Jr.). She doesn’t shut her daughter down when asked for a trip to Antartica, which no, most Americans would not be able to afford. The book is not yet a decade old and already it feels like the self-fulfillment worries of another lifetime. In this world, it seems only wealthy artists can afford the luxury to create, to run away from their family without warning, sweet talk their way into a fairly restricted part of the planet and claim it as something they needed to do for their genius work. It’s a privileged perspective with nothing to share for the rest of us. 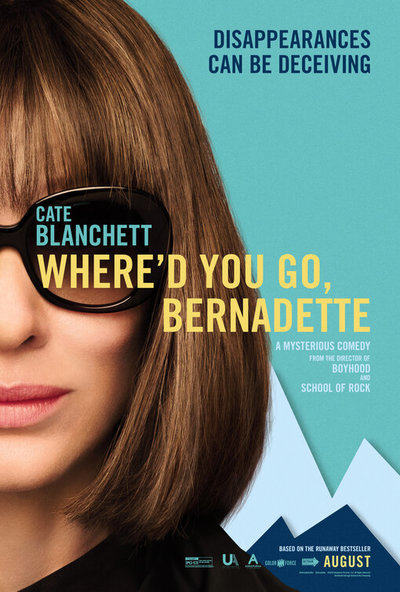