You can’t blame genre directors for trying to mix things up now and then, experiment with a new approach, see where it goes. Unfortunately, for this viewer, the formal constraint foisted upon him by writer/director Jeremy Rush in “Wheelman” went right up his nose and stayed there, resulting in a little less than 90 minutes of annoyance.

The bare bones of the storyline are familiar. Frank Grillo plays the title wheelman, a reluctant criminal (aren’t they all) working a bank robbery against his better judgment. What can he tell you? He’s less than a year out of prison, he owes money, and he has a beloved daughter who he’s trying to provide for and raise right, and an irritated ex-wife who is ever one court judgment away from getting permanent custody of said daughter.

So, of course, the job he’s working on is going to go very sour. Not that the wheelman initially makes life easy for himself. Driving the wet nighttime streets, he looks terribly confident and competent, and when he picks up the two bank robbers, he very aggressively high-hats them, refusing to give them a name and snootily telling them that he’s not here for small talk. No, he’s here to be a good dad, as his cell-phone conversations with his rebellious teenage daughter Katie tell us. I don’t trust crime movies in which the lead character has some sort of fixation with being Father of the Year, but that turns out to be hardly the biggest problem here.

No, the biggest problem is the aforementioned formal constraint that writer-director Rush sets up. Deriving inspiration (I presume) from the 2013 Tom-Hardy-starring drama “Locke,” this is a getaway car chase movie that aspires to remain entirely within the car. (Actually, within two cars, but let’s not get ahead of ourselves.) After the first snafu, in which Grillo’s wheelman leaves behind the robbers (this may be a silly question but given the fact that this movie is entirely night-set, I had to wonder why the bank they knocked over was open so late), he is obliged to play cat and mouse with a variety of unknown-number phone callers, all of whom are abusive and make terrible demands of him. They also all sound as if they’ve been doing “Goodfellas” karaoke.

For what seems like hours, these various characters exchange “Who are you”s, “where are you”s, “where’s my money”s, “f**k you”s, “f**k you motherf**er”s, and so on. Mr. Rush doesn’t seem to grasp that one reason “Locke “worked was that even though it stuck with one man in one car talking to a variety of people, those people were articulately voiced. More than that, they were brilliantly acted; one of the characters was played by Olivia Colman. And the movie’s writer/director Edward Knight had crafted a multi-leveled, suspenseful storyline to be talked through.

Also, having set up this formal constraint, Rush can’t even stick with it. The wheelman has to have a sit down with his initial contractor, a guy named Clay. So, he pulls up to the bar where Clay is at, and the camera sits in the car, waits, and captures the wheelman dragging Clay (Garrett Dillahunt) into the car, so they can talk. At this point, classic film lovers will know what I mean when I say, “‘Gun Crazy’ this is not.”

Your mileage may vary, particularly if you’re a fan of lead actor Grillo, whose work in a couple of Marvel pictures has earned him one of those cult followings you could call “ancillary,” no offense to Mr. Grillo. But whatever “Wheelman” does, it won’t propel him to anything beyond that status. 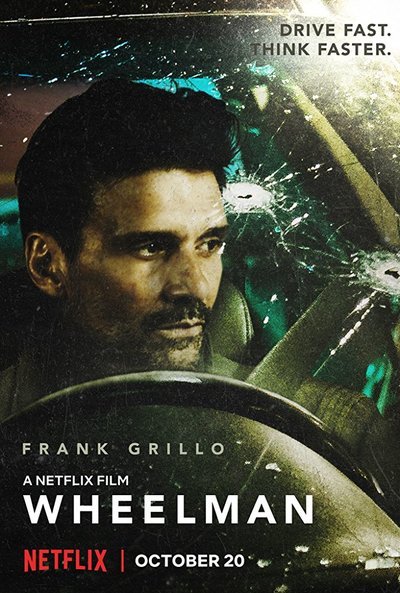