I have a soft spot for Stephen Dorff, whose early career sparks never fully caught fire. Even though he was designated 1992’s Male Star of Tomorrow by theater operators impressed by the then-teen’s performance in the apartheid boxing drama “The Power of One,” the actor never quite found his niche as a big-screen leading man.

Instead, Dorff has toiled fairly steadily in supporting roles, such as his showy vampire overlord Deacon Frost in 1998’s “Blade” and as a second-tier bank robber in 2009’s “Public Enemies.” But in 2010, filmmaker friend Sofia Coppola gifted him with a tailor-made role as a vacuous Hollywood pretty boy in “Somewhere,” a reverie about the indulgent pitfalls of fame. While fairly well-received, it was no “Lost in Translation,” and Dorff went back to primarily doing an array of B-movies.

Until now. This time, he takes matters into his own hands with “Wheeler,” a faux documentary about a down-on-his-luck small-town Texan who decides at the age of 41 to try his luck at being a musician in Nashville. Hiding behind a lumpy prosthetic nose, a shaggy wig and bushy caterpillar brows straight out of “Now, Voyager,” Dorff manages to re-invent himself as an earnest artist with old-fashioned values and a scarred past whose catchy, heartfelt original songs regularly rhapsodize about the magic of second chances.

Is “Wheeler” filled with twangy clichés? Yes, but this attempt at pseudo cinema verite basically rests on Dorff’s slim, plaid-shirted shoulders—and dang if he doesn’t make this simple yet sincere saga hit more than a few high notes. That includes his pleasantly raspy vocals and keyboard accompaniment on tunes that he wrote himself. Some of his genuineness in this milieu probably comes by way of his father, Steve, who penned tunes for the likes of Lee Greenwood and Anne Murray, as well as TV themes for “Spenser: For Hire” and “Murphy Brown.” The musical highlight, however, is “Pour Me Out of This Town,” which Dorff co-wrote with brother Andrew, who followed in their dad’s footsteps as a successful country songwriter until he died at age 40 in December.

As for the fiction-as-fact gimmick, it falls somewhere between “Borat,” in which British funny man Sacha Baron Cohen posed as a Kazakhstani TV personality doing on-the-street interviews with unsuspecting American citizens, and “I’m Still Here,” which recorded Joaquin’s Phoenix’s pretend stunt of claiming to have retired from acting in order to focus on being a mediocre rapper.

However, Dorff, who co-wrote the script with his director Ryan Ross, plays his variation on a mock doc in a quieter, more naturalistic key. There is the usual opening commentary from hometown folks reminiscing about Wheeler Bryson, declaring him to be a righteous dude while hinting at his somewhat rocky history. A female bar patron manages to sum up one of the movie’s main themes when she notes, “Country music today is cheesy. Whatever happened to the cowboy singing about real life?” The answer to that question is found in the film’s title.

We soon hit the road to Music City with the man himself, who duly lives up to his humble and good-natured reputation as he commandeers his late father’s pickup and chats with an unseen camera-holding friend who occupies the passenger seat. The minute he spies the twinkling nighttime skyline of Music City, an excited Wheeler pulls over and boot scoots down the alley that leads to the Ryman Auditorium, the original home of the Grand Ole Opry. Presumably, this is where Dorff begins to connect with non-actors such as the guard who won’t let him enter through the stage entrance or a diner waitress the next morning who wonders about the camera while supplying plenty of syrup for his pork sausage. Wheeler’s plan is to hit open-mic nights at such venues as Bobby’s Idle Hour and Douglas Corner, hoping to be discovered.

As luck would have it, he spies a Nashville notable, songwriter Bobby Tomlinson (among several cast members playing themselves, including Dorff’s “Blade” co-star Kris Kristofferson), on a tour bus who promises to check out one of his shows where Dorff assumes the guise of Wheeler in front of unsuspecting actual patrons. One thing leads to another and, just like that, Wheeler soon lands in the recording studio at Curb Records. But just when everything seems to be too good to be true, it turns out—rather abruptly and disappointingly—that it is.

If you are looking for a small yet pleasant diversion from politics this weekend, “Wheeler” will be available on demand as well as in theaters. However, there is one timely anecdote that Dorff’s character tells while driving that ties right in with current affairs. Wheeler, a history buff, considers it “pretty damn hilarious” that many people are upset about illegal immigrants these days. Why? Because his ancestors migrated from Tennessee to Texas in the early 1830s when it was owned by Mexico, which offered free land and low taxes to those who moved there. Eventually, the situation led to the Battle of the Alamo. After that, Texas became its own country until it was  annexed into the United States nine years later. His summation: “Basically, at the end of the day, we’re all illegal immigrants.” 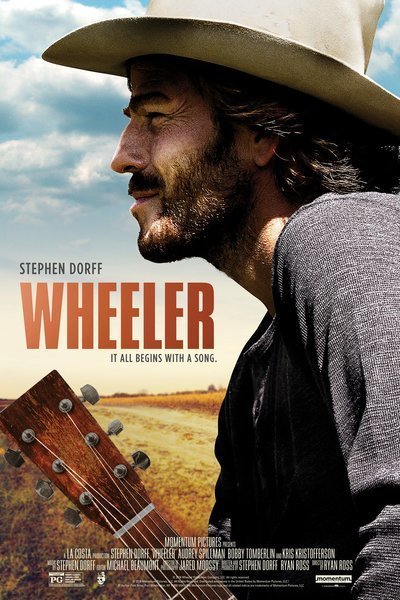 Rated PG for thematic elements, language, a nude image, and for smoking throughout.

Kris Kristofferson as Himself

Audrey Spillman as Herself

Bobby Tomberlin as Himself