Has the massive success of “The Walking Dead” franchise started to impact international indie horror? It certainly feels that way while one is watching the Danish zombie flick, “What We Become.” In fact, the name was even used for a volume of the Robert Kirkman graphic novel on which the AMC show is based. And the film has undeniable echoes of the spin-off, “Fear the Walking Dead,” in the way it tries to capture the early days of the end of the world. Perhaps this is why the overfamiliarity of Bo Mikkelsen’s film can be frustrating. There are large chunks of “What We Become” that feel like something we’ve seen before, a repeat of the AMC series perhaps, and just when it’s getting interesting, it ends, almost like it’s a pilot for a new series. There are enough elements that work—camera framing in the third act, use of score, the lead performance—that it’s worth a look for serious zombie fans (a group in which I would be a card-carrying member if someone took the time to print cards), but the film doesn't transcends its genre like the best.

“What We Become” is essentially about the end of the world reflected through the end of a family. There’s the stern-but-kind father named Dino (Troels Lyby), mother Pernille (Mille Dinesen), teenage boy Gustav (Benjamin Engell) and young girl Maj (Ella Solgaard). Gustav is starting to get rebellious, ignoring his parents’ instructions, and certainly noticing the beautiful young lady (Marie Hammer Boda) who just moved in across the street. These people live in a small, close community, the kind in which neighbors reach out to each other for help, such as when an older woman says her husband has died. The men that go to check on him and don’t find a body just presume she was wrong. Then things get weird.

As the news reports of some sort of viral outbreak in their area starting to go nationwide, our nuclear unit notices an unusually high military presence in their quaint community. The armed soldiers with gas masks that order families to stay in their homes are straight out of countless zombie flicks from “Day of the Dead” to the final act of “28 Days Later.” From the minute they enter the picture, we know they’re going to be willing to stop this outbreak at whatever cost, including killing everyone in sight. When Gustav starts hearing gunshots in the middle of the night, he becomes suspicious that the soldiers are there to wipe them out more than to protect them. Arguments over whether or not to leave the home and flee or follow orders take up the bulk of the first hour of this short (81 minutes) film.

And that’s a small problem. Mikkelsen makes the choice to essentially make the film a flashback, opening with a scene of Pernille in her bedroom, cradling a body as scary noises get louder and closer. So, we know things are going to get much worse before they get better. Consequently, most of “What We Become” is a slow-burn of a fuse that we know leads to an explosion. And Mikkelsen uses a few too many clichés of the genre while we wait. (Do people really watch old home movies while the world is ending?)

What saves “What We Become” happens late in the film, around the hour mark, when the movie becomes surprisingly action-heavy and Mikkelsen and his team prove more than capable of making a low-budget zombie flick that connects. It becomes a tense thriller—especially in a scene in which Dino and his neighbor recon the area for a planned escape—and Mikkelsen isn’t afraid to get vicious and dark. As the film peaks, its derivative, clichéd nature falls away and it becomes its own thing. Your enjoyment level will be determined by if you’re patient enough with it to get to that point. 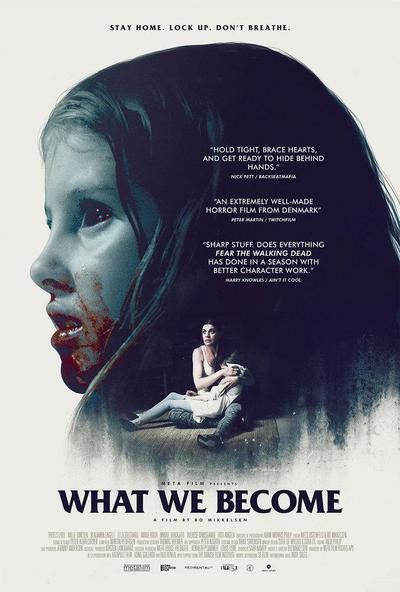