Liz Garbus’ “What Happened, Miss Simone?,” premiering on Netflix this Friday after opening this year’s Sundance Film Festival, falls just short of greatness but captures enough of the remarkable story and talent of its subject that it warrants a look. Your mileage for a film like this often comes down to how much the viewer knows about the subject. I knew very little about the life of Nina Simone, although I did sense that if you are more educated on her life story, there may not be enough here that truly enlightens. Garbus’ approach fluctuates from standard, music doc talking-head appreciations to long performances from archival video that are simply mesmerizing. Nina Simone could hold an audience in such rapt attention that when she stops a song at one point in “What Happened” and orders someone to sit down, you almost don’t blame her. And “What Happened” features some of the best concert footage and musical performances in recent music doc memory, even if it never quite answers the question in its title.

Nina Simone lived more than enough life for a documentary like Garbus’. Intercutting concert footage, talking-head interviews with people who knew her (mostly her daughter), and audio of an interview conducted with Simone years ago, “What Happened, Miss Simone?” episodically captures all the big moments of its subject’s life. It starts with the loneliness of practicing piano as a child, with the stated desire to become a prodigy. It took seven or eight hours a day of practice. And it’s important to note that Simone was doing something “white,” literally crossing the tracks to take her piano lessons, and feeling ostracized by both communities—unwelcome by the whites who felt she was invading their world and pushed out by her own community at the same time.

Simone went to Juilliard for a year and half, but was denied application to the Curtis Institute in Philadelphia. She was good enough but her race held her back, and the hard truth that she couldn’t practice enough to overcome institutional racism hurt her greatly, impacting the way she would respond to the civil rights movement later in her life. She got a job in Atlantic City at a dive bar. Imagine seeing Nina Simone playing at a crummy bar in Atlantic City. She honed her diverse skills there, moving out of classical training to “bar music,” and being told she had to sing to keep the job. And, wow, could she sing.

Garbus makes the very smart decision to allow Simone’s talent to be the main subject of “What Happened, Miss Simone?” We see some songs in their entirety, like a breathtaking “I Love You, Porgy” from a Playboy Penthouse broadcast and a closing number that I won’t spoil but lands a deserved standing ovation. Whenever the presentation starts to feel a bit too “Behind the Music” standard, the music and its creator elevate it. It’s certainly never dull, even if I wish Garbus had found an approach as unique as her subject. Nina Simone had so much to say. We don’t need quite so much of her daughter’s impressions of her when the music often says so much more.

As so many music docs do, “What Happened, Miss Simone?” eventually gets truly dark. Simone’s husband/manager abused her, not only pushing her too hard to work but physically beating her in front of her child. Simone had gotten to the top of the mountain in terms of her career, but there was still so much pain and evil in her life, which you can certainly hear in a lot of her music. When the civil rights movement became an important part of her life, Simone expressed her belief that violence was the answer to achieving equality. It wouldn’t be given; it had to be taken. And that outspokenness hurt her career, pushing her deeper into a life spent in depression and even leading to her passing the physical abuse she had received on to her child. Garbus doesn’t shy away from the darkness that Simone not only experienced but forced on others.

Netflix has become a major player when it comes to television but the jury is still out as to whether or not they will matter as much in the world of film. They have started to finance their own films (including the next one by Cary Fukunaga of “Sin Nombre” and “True Detective”) and pick up more and more festival hits every day. “What Happened, Miss Simone?” will likely reach more people this weekend through the service than it would after weeks in theaters. And it’s another sign that the company is considering high quality with their decisions instead of merely picking titles that would get them attention. 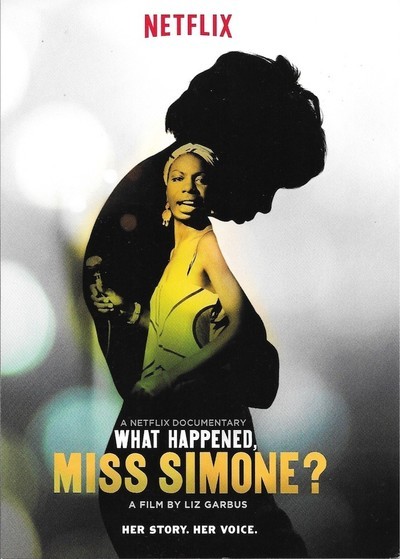