We Are Your Friends

Electronic Dance Music, or EDM as Those Damn Kids call it, is quite the thing with the aforementioned Damn Kids these days, with their rave and their Molly and whatever the hell else they’re up to. Its synthetic trappings notwithstanding—the “Electronic” part—EDM is dance music, just like Big Band Swing was, just like early rock and roll was, just like disco was. All musics that were initially reviled, and to some extent (with the arguable exception of Big Band Swing) initially misunderstood by Hollywood.

“We Are Your Friends,” directed by Max Joseph, from a script by Joseph and Meaghan Oppenheimer (based on a story by producer Richard Silverman), makes a big deal out of “getting” EDM. There’s the sleek, visual-format flexible manner of the filmmaking, which mixes graphic design tropes with animation and such for some of the movie’s most engaging sequences. There’s a scene in which the protagonist, a fledgling EDM DJ named Cole Carter, explains the science of EDM as he rocks a dance floor, elaborating on getting the magic BPM (Beats Per Minute) count that makes the music control the dance floor subjects, almost zombie-like in the grip of the pulsating bass. There’s a little music-wonk name dropping, with a mentor DJ showing off a rare Buchla synthesizer and comparing his possible protégé, unfavorably, to one Juan Atkins.

Joseph recently made a documentary about the EDM production team/record label DFA, so he’s got some genuine knowledge under his belt. And while EDM is an area of music in which my expertise doesn’t extend far past that of an interested dabbler/dilettante, the EDM soundtrack of this movie sounded pretty credible/hot to me. Too bad that the movie’s character dynamics and plot are as cheesy as that of, oh, I dunno, “Don’t Knock The Rock.” How’s this for cliché: talented, eager, but unseasoned DJ gets taken under the wing of older, popular, but jaded and close-to-washed-up genre star, who shows him the ropes, opens his ears, and who also happens to…wait for it…have a gorgeous girlfriend with whom Mr. Talented And Eager gets entangled in a bad way. Yeah, that kind of plot.

What’s worse is that said DJ, Cole Carter, comes complete with a contingent of San Fernando Valley tatted BroDouche pals, kind of out of the “Diner” handbook but even more belligerent, clueless, and sexist. And minus any charm. There’s super-brash Mason (Jonny Weston), self-proclaimed “movie star” Ollie (Shiloh Fernandez), and Squirrel (Alex Shaffer). In the event you haven’t guessed, Squirrel is the shy, sensitive one.

As for Cole, he’s played by Zac Efron, getting a tad edgier after “Neighbors.” I had, a few months ago, come upon a bit of misinformation: I read somewhere that Zach Braff was playing the role of the EDM DJ in this movie. I had a great observation prepared, something along the lines of,  “Zach Braff trying to pass himself off as a guy who’s even HEARD any EDM, let alone an EDM DJ, is about as plausible as Bruce Hornsby jamming with The Melvins.” But, as I said, I was misinformed.

Efron, however, often looks nearly at sea as Braff would have. Part of it has to do with his character being a bit of a cipher to begin with. His mentor-girlfriend triangle, while entirely rote and predictable in most of its particulars, also constitutes one of the more watchable overall portions of the movie (the stuff with Cole and his pals is very nearly insufferable, and the detour these career-challenged millennials take with a coarse real estate vulture in a subplot constitutes several varieties of nadir), because the mentor DJ is played by Wes Bentley, who brings a humming undercurrent of sardonicism to his role, and the assistant/girlfriend is played by Emily Ratajkowski who is just…delightful to look upon. A scene at a Vegas DJ fest wherein her character gives Cole a tab of Ecstasy, or whatever it is, and they “roll” together made me wish I was a much younger man, a man with hair, and a tolerance for recreational drugs. I should say ALMOST made me wish, as I happen to be happily married to a beautiful woman who doesn’t care that I’m bald. I should also mention that aside from having Major Presence, Ratajkowski navigates her character’s three crucial (actually only) nodes, Sweet, Sexy, and Sensible, very well.

But I digress. Lest the viewer come to the conclusion that this movie’s portrayal of the EDM drug culture is too cavalier, there does kick in near the end a Cautionary Tale Plot Point, which is arbitrary to the point of insulting. Except it’s too late to be really insulted, because one is already painfully aware of how unsuccessful the movie has been. And then, when the movie makes one more flashy attempt to get lay viewers to “grok” EDM, it’s too late, despite the sequence being kind of not bad. While I might actually go out and buy the soundtrack album, the last thing I’m gonna say about the movie is friends shouldn’t let friends pay money to see “We Are Your Friends.” 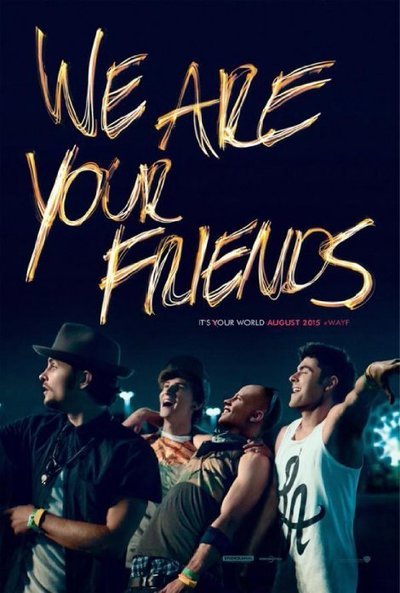 Rated R language throughout, drug use, sexual content and some nudity