I suppose aging fans of the late-‘70s Los Angeles based post-punk band X must find it a little dispiriting that a movie called “We Are X” comes out in 2016 and nobody says “Didn’t they already make a documentary about them?” “They,” whoever they are, already did indeed, and more than one, the best-known being 1986’s “X: The Unheard Music.” In any event, having cleared that up, one may infer that “We Are X” is about a plural entity masquerading as the unknown integer, or a different band.

It is about a different band, one from Japan, one with a tumultuous two-tiered history and a lofty, sort of, 21st century ambition: to play New York City’s celebrated Madison Square Garden. To sell out Madison Square Garden too, maybe, despite the fact that they have a pretty low profile in the States. Some concert footage early in the movie, from October 2014, confirms that the gig was a success. It also gives a viewer a taste of what they would, with any other band documentary, be in for during the next 90 minutes or so:  the band’s music, which in its MSG iteration is a particularly accomplished type of pomp rock, like the band Europe if it were a little less terrible. The prospect of more of this kind of stuff was not exciting for me. But as it turns out, “We Are X,” directed by Steve Kijak, who in 2006 made a pretty good documentary on the teen idol-turned-maverick-musician Scott Walker, has less of its subject’s music in it than almost any other such movie I’ve seen. The drama here is in the players.

Like The Dave Clark Five (and this is really the only resemblance between the two combos), X, or X Japan as it was often known, is led by its drummer, the frail, androgynous Yoshiki. Also a pianist, Yoshiki is the band’s composer. Much interview time is expended on Yoshiki’s frailty as a child, his early health issues, and his morbid demeanor. “His entire body was emanating death,” one associate claims. This is a bit disquieting, but Yoshiki’s mode of presentation throughout is so glam and camp inflected that there’s something a little ridiculous about it. X began as a speed metal band before discovering Liszt, or whomever it was who got them to pomp-rock, and Yoshiki’s exertions behind the drum kit had certain consequences. “When Yoshiki collapses on stage, it looks as though he is performing,” one interviewee says with a straight face. This is cause for humanist concern, yes, but there’s also something slightly Spinal Tap-like about the whole thing.

One initially feels similarly about the journey of Toshi, childhood friend of Yoshiki and lead singer of the band. “Toshi was brainwashed,” Yoshiki says early in the movie, discussing the band’s breakup, which spanned about a decade. “Sure, by a competitive manager,” a rock maven might say under his or her breath. But no. Toshi apparently was brainwashed by a religious cult he was introduced to by a girlfriend. This is definitely not funny. Eventually death really does fall on the band. It’s pretty heavy. One can’t not root for their triumph. They do sell out the Garden, a testimony to their hard work…but also, honestly, to the fact that New York is a pretty diverse city. Acts that white people have never heard of sell out there regularly.

American interpreters and champions of X interviewed here include Stan Lee, because why not, and KISS’s Gene Simmons, who, recalling his own experiences as a speaker of heavily accented English in the United States in his early days, provides a brief but telling glimpse into the psychological maelstrom that made him what he is today. He maintains that had X sung in English all along, they perhaps could have been the biggest band…In The World. While the movie will not necessarily make you rush out to fill the gaps in your X discography, there is something inspiring about their belief in music—and showmanship—and their determination to meet their rock and roll goals (their obsession with Madison Square Garden is based in part on the legendary gigs performed there by the Stones, Zeppelin, and other Western pillars of classic rock), keep playing, and keep creating. 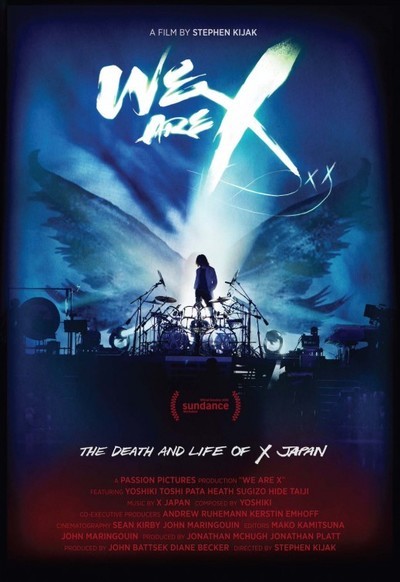