We Are Little Zombies

The best coming-of-age stories tend to dramatize without totally embracing their teenage or preteen subjects’ angst. At least that's how it seems to me right now as I think about “We Are Little Zombies,” a feel-good Japanese black comedy about four adolescent orphans who start a garage band after their parents die.

“We Are Little Zombies” is, however, a little hard to describe: it’s not really about how music can transform and/or improve you. Or maybe it’s not just about that, since writer/director Makoto Nagahisa’s film is also sometimes a post-punk musical about authenticity and selling out, as well as a manic hangout comedy starring the Little Zombies, a quartet of young adults who are too young to drink or drive. “We Are Little Zombies” also isn’t just an entertaining, if grim, fantasy about teen angst as it’s experienced by a group of despondent Gen Zers who sometimes use, but don’t ultimately fit, the mold for success that’s been left behind by their Gen X and Millennial predecessors.

Instead, “We Are Little Zombies” is a relentless, but emotionally well-balanced character study of Hikari (Keita Ninomiya) and his bandmates as they receive a series of transformative reality checks, and also perform post-millennial garage rock that sounds like a cross between post-shoegaze emo rock and video-game-style chiptunes.

As you can imagine, “We Are Little Zombies” is something of an acquired taste: you have to want to spend time with these kids since they’re practically asking to be rejected at every turn. Their mopey, abrasive style of power-pop is also catchy, but obnoxious, and their jaded worldview is often literally framed by their addiction to outdated forms of technology, like Famicom video games and disposable cameras.

The Little Zombies’ backstories aren’t much more lovable: Hikari’s rich father was a serial adulterer and his mom would have preferred to live completely alone; Shinpachi (Satoshi Mizuno) found his parents dead in a stir-fry-related gas explosion; and while Yuki (Mondo Okumura) was beaten regularly by both his dad and older brother, Ikuko (Sena Nakajima) is applauded by her father for bullying one of her classmates, since, according to his logic, that means she’s not being bullied herself. Also, because Hikari is addicted to retro video games, his story (and his band’s, by extension) is presented as a series of video game stages, each one with a “Scott Pilgrim”-esque chapter title. And Puccini’s “Un Bel di Vedremo” aria, from Madama Butterfly, is almost always playing on the movie’s soundtrack. These kids are sociopaths, is what I’m saying, and Nagahisa’s story accurately reflects that.

Thankfully, Nagahisa never treats the Little Monsters or their shared pathologies as a sign of our times. Instead, Nagahisa presents their sprawling narrative—including their band’s rise and inevitable fall—as a series of encounters with other people who are also living lives that they feel have been, in one supporting character’s words, “chosen for them.”

“We Are Little Zombies” is often the sort of effects-driven, hyper-stylized, episodic narrative that Danny Boyle and Sion Sono used to specialize in (especially “The Beach” and “Suicide Club,” respectively). Nagahisa uses a battery of audiovisual tricks and styles to show how warped the world feels according to these characters. For about an hour, the Little Zombies talk about their pre-orphan days and prepare for their exciting and strange new lives by arming themselves with some objects of sentimental value, like an electric bass or a stir fry wok. But ultimately, “We Are Little Monsters” is about what happens once you realize that you’re not in control of your life, because your personal rebellion’s success (and general well-being) depend on factors that are mostly out of your hands.

I expect I’ll be thinking for a while about and admiring the little choices that Nagahisa makes throughout “We Are Little Monsters,” not because he’s already a great storyteller (this is his debut feature, after all), but because he’s thoughtful and ruthlessly impressive. Almost every scene feels like it was designed with a unique visual scheme and payoff in mind, and all feature some insight into Nagahisa’s characters.

I’m especially fond of the scene where Hikari, during an on-camera promo video, is asked what his ultimate goal is. He responds with characteristic intensity, saying that he hopes to murder the bus driver who accidentally killed his parents while they were on an “All You Can Eat Strawberry Tour.” “Defeating him is my purpose in life,” Hikari says. “Maybe,” he adds without missing a beat, making that one word its own sentence. “We Are Little Zombies” is a keeper because it’s more about that “maybe” than what exactly is the matter with kids today. 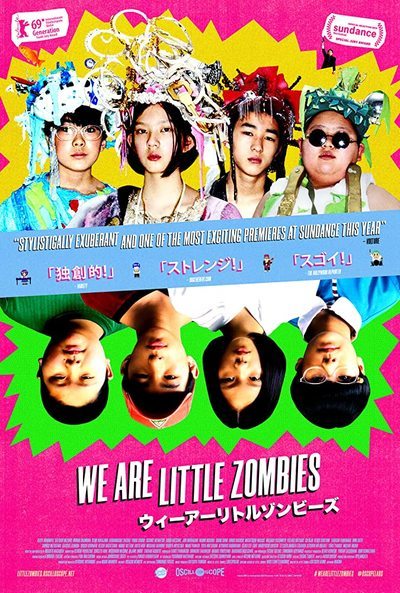