Voyage of Time: The IMAX Experience

In 2003, noted author (and personal hero) Harlan Ellison chided me for saying that the reprinting of some of his short stories was "awesome." "The Grand Canyon is 'awesome,'" he shouted theatrically. "The Heavenly Cosmos are 'awesome!' This? Maybe interesting. But definitely not 'awesome!'"

I thought about that definition of "awesome" as I watched the 45-minute cut of writer/director Terrence Malick's cosmic nature documentary "Voyage of Time: The IMAX Experience." Malick's film, a combination of gorgeous documentary footage and vividly detailed computer-generated imagery, is majestic but so broad in its scope that I left it feeling like I'd seen something beautiful whose spark of genius only lasted as long as it was in front of my eyes. Malick's idiosyncratic marriage of spiritual speculation and nature photography is frequently amazing. But altogether awesome? Not quite.

Narrated throughout by Brad Pitt, "Voyage of Time" starts at the beginning of time and ends with the demise of the world as we know it. We see swirling nebulae, smoky volcanoes and multiplying bacteria while Pitt tells us about the "restless" character of life.

Malick has an elemental view of life's origins, so Pitt offers general poetic speculations instead of specific information about what we're looking at. He suggests, in his placating authorial whisper, that "Nature" is constantly perfecting life on Earth. "Death" pushes Life along towards "Perfection." "Community" leads to the individual "Self," and we witness a vast array of crabs piling onto and climbing over each other. Life teems with mysterious "Goodness" as translucent white jellyfish float gently towards the water's surface.

There's something fundamentally sanitized about this dreamy, placid view of life. Ellison once said that life was a series of confrontations. But Love unites Malick's world, as we see when two blue whales hover near each other. And we are just like the dinosaurs, since we also have the capacity to feel affection for each other and, yes, to feel awe.

But there is no violence in Malick's world, just a cycle of becoming that comes to an end for one large fish after he's bitten by a sea lion. Herons dive deep into the ocean and pick at a school of fish, who rally in unison to escape. Life thrives, just as Malick insists that "dark" is necessarily "bound" to "light." We see humanity in a flurry of images at the end of this cut of "Voyage of Time," because our story is the same as the story of growing trees, cooling Earth, and the catastrophic meteor that salted the Earth with plant-killing ash. Or at least, that's what an introductory scrolling text suggests when it tells us that we are seeing ourselves when we examine the objects and animals in the film.

I struggle with Malick's expressive, supra-human vision of life because its philosophy is bound up in its simultaneously pat and viscerally enchanting expression. I knew something was off when footage of computer-generated dinosaurs left me cold. Similar dino footage used in Malick's majestic "The Tree of Life," a superior companion film that shares footage and a general outlook with "Voyage of Time," felt genuinely mysterious because of contextualizing footage. The narration is similarly nuanced in that earlier film while it is purposefully simplified in "Voyage of Time." These two films provide fundamentally different viewing experiences: "The Tree of Life" pulls you along with the speed and variety of life as it's experienced from a God's eye view while "Voyage of Time" summarizes that perspective, putting it in terms that a "child" could understand. We are all "children of the Good," we are told, because we are just another part of Nature's constant yearning for Perfection.

Still, it is exciting to see such a personal theological vision writ large on an IMAX screen. Who else but Malick could make me puzzle over the meaning of a description of a "pre-mammalian" quadruped lizard creature? What other documentarian would revel in the unfathomable passage of time while also presuming to speak of a Natural plan? What other storyteller would have the audacity to make a cinematic poem that's largely comprised of documentary footage, and bookended by simulated versions of the Big Bang and Earth's destruction? What's my problem anyway?

I don't know how to answer that last question, but I can tell you something Ellison wrote, this time in a 1980 issue of Future Life. In a column later anthologized in his An Edge in My Voice essay collection, Ellison rhapsodizes eloquently about the Voyager I mission. He was awed, then crestfallen at the thought of the news cycle concentrating on the war between Iran and Iraq, and not NASA's latest photographs and speculations about the spokes on Saturn's rings. "Ain't we a wonderful species," he muses sarcastically after reveling for thousands of words in the thrill of discovery, and the shock of the new provided by NASA's scientists. I didn't need "Voyage of Time" to confirm my spiritual point-of-view to be great: I just wish it were a little less flat. As it is, Malick's film feels incomplete, like a sampler platter version of a hearty meal. Awesome? Maybe not. But intriguing? Oh my yes. 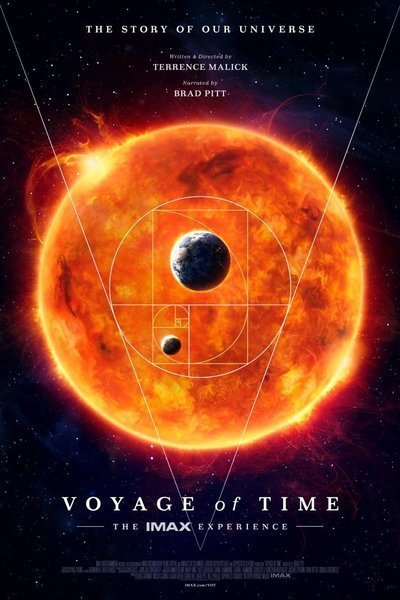