There is an inherent level of tonal ambiguity baked into the home invasion thriller-cum-comedy “Villains,” the third feature collaboration of the filmmaking duo Dan Berk and Robert Olsen. Also serving as the co-scribes of a story that tiptoes around notes both absurd and unsettling, Berk and Olsen manage to milk that uncertainty for all it’s worth and deliver an amusing genre romp where the hunter becomes the hunted. With a surprising amount of side laughs and an isolated, elaborately decorated chamber in the woods full of opportunities, “Villains” sets an intriguing stage for a quartet of skilled performers, all clearly enjoying the chance to fly their freak flags to comical effect.

We first meet Mickey (Bill Skarsgård, amusingly frantic) and Jules (Maika Monroe, equally frenzied); two young, clumsy Bonnie-and-Clyde-wannabe lovers who “Pumpkin and Honey Bunny” their way from smalltime crime to smalltime crime, hoping to eventually end up somewhere in Florida, where they are convinced a new, worry-free life awaits. Their vision of the orange-hued, warm and beachy Sunshine State—which cinematographer Matt Mitchell represents in dreamy glimpses—looks curiously like a nostalgic and feverish Harmony Korine movie. Perhaps Mickey and Jules just miss their teenage years of being forever spring breakers. Or more likely, they were never before granted a carefree youthfulness, which they just desire to claim retroactively once and for all. Smart, they most certainly are not. But perhaps they still deserve a break in life after all.

Berk and Olsen don’t quite go out of their way to suggest a profound back-story for the troubled youngsters—this isn’t necessarily that deep a film, nor does it want to be—but Monroe and Skarsgård invite the audience in with their childish rawness, and buy some unearned good will from the viewers along the way. As gifted actors, they sell the purposely unrefined lines of dialogue exchanged between their respective characters and almost immediately, become a kooky crime pair one simply can’t hate: inept yet charming, ambitious but painfully naïve.

Mickey and Jules are so hopeless as runaway felons that after robbing a gas station, they realize, of all things, that their car is out of gas. Luckily enough, Jules notices a lonesome mailbox perched on the side of the road, fronting a handsome house with a car waiting to be stolen and a mysterious basement that houses a little girl (Blake Baumgartner) chained to a poll. What kind of good-hearted yet down-on-their-luck criminals would the dreamy lovers be, if they don’t as much as attempt to help the (what looks to be a) kidnapped child?

But their idealistic rescue mission comes to a halt when George (Jeffrey Donovan, the politely creepy MVP) and Gloria (a very “Mommie Dearest” Kyra Sedgwick, like you’ve never seen before), the ostentatiously mannered masters of the house, drop in. A case of married infertility gone psychologically bad, Gloria clasps a fake baby while George conceals his masculine insecurities behind a jovial Southern accent and some perfectly played performative courteousness. As soon as the duo steps into the scene dressed in tucked-in outfits frozen in time (costumer Stacey Berman plays up the couple’s put-together eeriness), their retro home—brought to life by production designer Annie Simeone in meticulous detail—makes all the more sense. George and Gloria seem to live in some corner of the past and don’t quite take kindly to contemporary strangers with a quixotic mission and an ambiguous-at-best moral code.

Once all the players find each other trapped in a weird cat-and-mouse game, “Villains” signals a direction akin to “Don’t Breathe,” a far more menacing home-invasion thriller that also turns the tables against the invaders. But it doesn’t quite go there despite its escalating darkness and bummer of an ending that cuts only some of its burdened characters some slack. But between its genuinely entertaining plot turns and a stellar scene where a nosy officer (Danny Johnson) hilariously renews the stilted action, there is a lot of worthy panache to be found in “Villains,” which remains delightfully fresh throughout despite being nothing all that new. 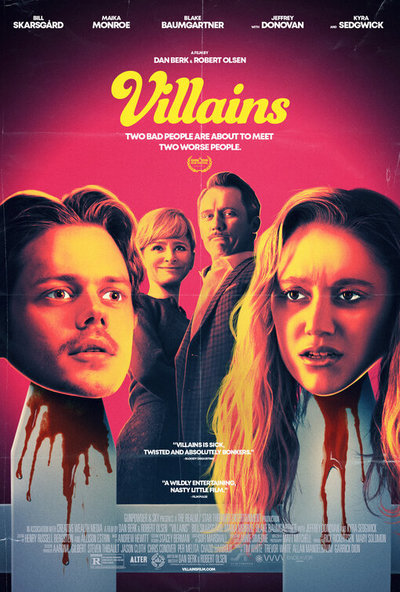 Rated R for language throughout, some violence, drug use and sexual content.