A sense of humor is a funny thing, especially for those of us who treasure the weird stuff. When something that's "out there" works, it’s true love. When it doesn’t, it’s like a bad date that had huge promise until it got underway. Jack Henry Robbins' “VHYes,” with all of its nostalgia for late ‘80s TV and its endemic cheesiness, follows after the likes of Weird Al Yankovic's masterpiece "UHF," Casper Kelly's endlessly loopable opening credits hellscape "Too Many Cooks," and even the Kyle Mooney skits that are "cut for time" on "Saturday Night Live." And while I adore all of those polarizing works, I didn't see what was funny about the shallow wackiness of "VHYes."

Shot entirely on VHS and Betamax, the whole of "VHYes" is presented as the contents of a video tape, which was initially used to film the wedding for the parents of a young boy named Ralph (Mason McNulty). When Ralph gets a camera for Christmas in 1987, and learns that he can record from the TV, it opens a world of possibilities. Namely, whatever he can find on the TV that is weird to him at the time. In one of its many abrupt, fuzzy cuts, an excited young Ralph jumps on his bed and says that he wants to create the ultimate video playlist, and soon into watching “VHYes” you accept that that’s all you’re going to get.

Instead of feeling like the chaos of a found tape, “VHYes” assembles itself like a series of sketches that it can bounce between, with random peeks back at the original wedding video contents; it struggles to have a heart by intermittently making it a story about Ralph realizing the truth behind his parents' marriage. Some sketch set-ups are directly, lazily recognizable to TV history: one cop parody steals the red and blue text from “Law and Order” because you wouldn’t get that it’s meant to parody if it didn’t have that logo. As if a tell on its weak absurdity, "VHYes" has yet another parody on TV painting instructor Bob Ross (even after Deadpool did it), with a segment starring Kerri Kenney, who turns the zen of such a host into the mindset of a creepy person who believes in aliens.

The very nostalgia within the concept becomes a pit, even when “VHYes” threatens to get truly weird. It’s not until the final minutes that the movie taps into the reality-bending that had been hinted at earlier, when Ralph started to see himself in the stuff he was watching, after one segment involved a VHS expert talking about the soul-suck that will be handheld recording in the future. Many parody sketches don’t have a discernible reference to build on (the recognition is what makes it initially funny), and instead rely on a shallow cheesiness. Even though "VHYes" features many dynamic funny people like Kenney, Thomas Lennon, Mark Prosch, Charlyne Yi, and Robbins' parents (Tim Robbins and Susan Sarandon), many of the characters in these sketches are so broad they aren't particularly clever.

“VHYes” breaks the biggest rule of parody, over and over again: it simply tries way too hard with material that’s far too easy. That’s the case with an adult film bit that goes for low-hanging fruit of bad acting, as one guy is poorly reading cue cards in a late night movie about three alien women. Or there's an ongoing true-crime show about how a sorority thought one of their sisters was a witch because she did magic, which is a funny premise given a flat execution. The commercials that are thrown in the mix, like about a violent security company, or pads to sound-proof your bathroom, are like random splatters of paint whose only intention is to fulfill the project's obvious self-amusement.

While “VHYes” is very much inspired by the media experience of 1987, it’s actually about a very modern hell: Your friend sits you down to show you something really funny on YouTube, but oh, no—they’ve misjudged your sense of humor. Now you’re stuck, watching all of it, trying to find something funny to offer a polite relief. I started to feel trapped by my obligation to watch something that could very well have been my type, but now I’m just grateful the filmmakers of “VHYes” didn’t watch me watch it in laughless silence. 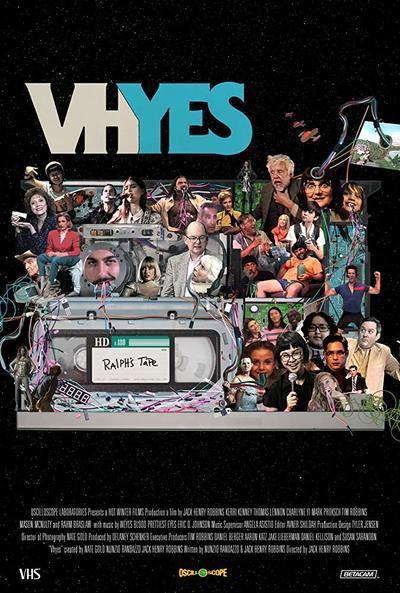