"Vengeance" sounds like the title of an action thriller. There have been films with that name before. But although vengeance is discussed in "Vengeance"—the first feature from writer/director/star B.J. Novak, co-star and co-writer of the American version of "The Office"—it has a lot more on its mind. Too much, probably.

The story begins in earnest when New Yorker writer and aspiring public intellectual Ben Manalowitz (Novak) gets a call at his Manhattan apartment late one night from Ty Shaw (Boyd Holbrook), who lives in one of the flattest backwaters in West Texas, a small town five hours' drive from Abilene, which is two hours and forty minutes from Dallas. Ty is calling to tell Ben that his sister, Ben’s girlfriend—who is oddly also named Abilene, Abby for short—has died.

Ben doesn't have a girlfriend named Abby. He's a player who hooks up with many women. But a quick check of his phone confirms that he did indeed have sex with an aspiring singer named Abby (Lio Tipton) a few times and then forgot about her. Somehow he ends up letting himself be talked into traveling to Abby's hometown, attending her funeral, and commiserating with her grieving family, which also includes her younger sisters Paris (Isabella Amara) and Kansas City (Dove Cameron), her kid brother El Stupido (Elli Abrams Beckel), and her mother Sharon (J. Smith-Cameron). Then Ty tells Ben that Abby was murdered, probably by a Mexican drug dealer named Sancholo (Zach Villa), and asks if he'll help the family seek, well, you know.

Ben is a narcissist who seems to view every relationship and experience as a way of raising his status as a writer and quasi-celebrity, so it seems unbelievable at first that he'd travel to Texas to attend the funeral of a woman he didn't really know. But the notion begins to seem more plausible once he starts talking to the family and slotting them into his prefabricated East Coast media-industrial-complex notions of "red state" and "blue state" people, and spinning his theories about temporal dislocation. Modern technology, he says, allows every person to exist in every moment except the present if they so choose. The desire for vengeance, we are told, is exclusively a backward-looking urge.

Intrigued by the possibility of writing the equivalent of a great American novel in the form of a podcast (he even name-checks Truman Capote's In Cold Blood) Ben decides to stick around to gather material for an audio series, which will be created under the supervision of his friend Eloise, a New York-based podcast editor for a National Public Radio-like organization. (As Eloise, Issa Rae works wonders with a thinly written role.)

If Ben’s creative vision sounds like the kind of navel-gazing blather that you'd hear on a true crime podcast in which an actual person's murder becomes a springboard for brunchy rumination on law and truth and the nature of yadda yadda by a group of Ivy League college graduates based in Brooklyn, well, Ben is aware that he's sliding towards that cliché—and so is Eloise, who early on makes a joke to the effect that Ben is the only white man in America without a podcast. And yet, true to media form, they embrace the templates, tropes, and clichés anyway.

Unfortunately, so does the movie. Like "The Daily Show" and its many imitators—and like Jon Stewart's recent film "Irresistible"—this is a movie that chastises its protagonist and the "red state" people he engages with for failing to look beyond the clichés they're fed by their own self-enclosed media loops, while at the same time dining out on them. On one side of the great divide is a nation of "coastal elites" (driven by Harvard-educated Jewish people like Ben) who name-drop cultural tidbits that they learned in college and never revisited; sneer at monogamy, and think everything between the coasts that's not a Top Ten city is a barbaric wasteland. The inhabitants of said wasteland are people whose favorite restaurant is Whataburger and have several guns in the house for every person (including the kids) and use them to settle their differences rather than calling 911.

Intriguingly, though, even as "Vengeance" checks box after box on the op-ed chart of American shorthand, it also presents a number of characters with idiosyncrasies and layers that we've never seen in a movie before. Ben himself is quite a piece of work, and it's to Novak's credit that we eventually dig past Ben's buzzwords and NPR-ready voice and see the character's self-loathing (and, it would appear, the filmmaker's) at realizing that he's a prisoner of the same limited thinking he decries. (Ben often plays more like the protagonist of a French comedy than an American one—or like the characters played by Canadian satirist Ken Finkleman in "The Newsroom" and "More Tears.") There's little discussion of racial grievance as a motivation for politics in the film, and nobody mentions Trump, Greg Abbott, or the transformation of Texas into an authoritarian nation-state. The movie takes the audience into a minefield but tactfully declines to point out most of the mines. But these threats lurk under the surface, and they do occasionally explode—particularly when the drug epidemic that's decimating white middle-America comes to the forefront of the story.

The supporting cast boasts a number of characters who seem one-note during their introductions but quickly assert their spiky individualism. Smith-Cameron seems underutilized at first, but becomes the emotional anchor of Ben's story, and her final scene is powerful. There are several terrific scenes involving Abby's onetime record producer Quinten Sellers, kind of a Phil Spector of West Texas who lives and works in a combination home, studio, and cult compound, and regales his talent and hangers-on with monologues about time, space, individuality, art, drugs, and hedonism that Marlon Brando or Dennis Hopper might have delivered in a 1970s American art film. Sellers is played by Ashton Kutcher in what might be a career-best performance. With his polite but eerie intensity, ten-gallon white cowboy hat, and lanky frame, it's as if Sam Shepard had come back to play Col. Walter Kurtz.

Novak is a thoughtful writer with a lot of things to say about the United States of America in the year 2022. The problem is that he seems determined to say all of them in one feature film. The result is a jumbled, fitfully amusing, occasionally fascinating effort, but one that shows promise even when it's stumbling over its ambition and falling prey to some of the same stereotypes about "red" and "blue" (or reactionary and progressive) America that it keeps intimating that Americans need to get beyond. The first 15 minutes are borderline awful, but the movie gets better and more surprising as it goes, and the final act is impressive in its determination not to give the audience what it wants. Novak is famous enough that he could've cobbled together an onanistic two hours of nothing and still gotten into South by Southwest with it, but he decided to try to make a real movie. 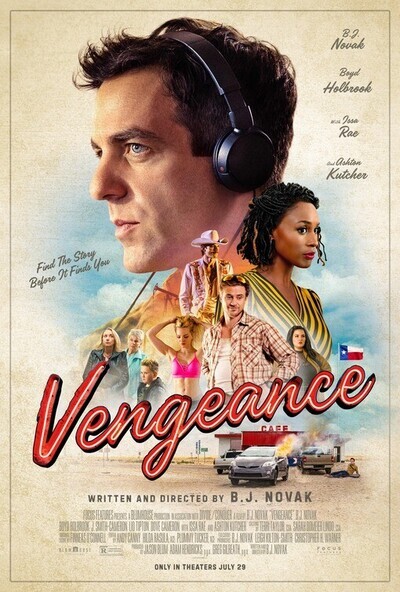