"Irresistible," about a political campaign manager who helps a salt-of-the-earth small-town Democrat unseat a Republican mayor, is a conceptually fascinating, deeply annoying film by writer/director Jon Stewart, formerly the host of "The Daily Show." The story begins on Election Night, 2016, with two political consultants, Democrat Gary Zimmer (Steve Carell) and Republican Faith Brewster (Rose Byrne), watching the election returns. Gary is shocked that Clinton lost. Faith is shocked that Trump won. Then both political operatives let their masks drop and tell assembled reporters that they're liars, offering the public a fairy tale, a story, a drama.

Turns out this is a prologue, or a false start. Nothing like that could ever happen, but we're supposed to be sad that it can't happen, because the system is so corrupt, you see? Like so much in "Irresistible," the scene is trying to be meta. It's trying to "make us think" about "stories" and "lies" and how they contribute to the mess we're in. It's the first of many missteps by a film that plays as if it might have been made by a young person who just became politically aware a few months ago, rather than, say, Jon Stewart, the man who used to be in charge of the most influential politically driven TV program of the last two decades.

Many of the movie's leaden, cornball choices and self-conscious distancing devices ultimately reveal themselves as aspects of a grander, quite foolhardy strategy. It appears that Stewart is being shallow and sentimental and predictable on purpose, to show how shallow and sentimental and predictable American politics has become. Which of course means that the movie's condemnation extends to us, the viewers. After all, if we really hated all the intellectually poisonous nonsense that has made politics, and life, so horrible, we'd do something about it.

After a second opening/false start (a bummed-out, hungover Gary ignoring calls and texts the morning after the election) and a third opening/false start (the credits sequence, a collection of presidential campaign photos highlighting how phony these "candid" moments are) we finally arrive at the fourth opening and actual start of "Irresistible." Former Marine Col. Jack Hastings (Chris Cooper), a conservative Democrat, drives his pickup truck through his solidly right-wing Wisconsin town, which was economically devastated by the local military base shutting down and has turned into a wasteland of rundown homes and boarded-up stores.

Despite all these pressing real-world crises, the town council is debating an ordinance that will require immigrants to present a picture ID whenever they're doing anything remotely official. Jack ambles in, summons the spirit of another famous movie Cooper, Gary, and makes a heartfelt speech opposing the measure. Someone in the audience captures the moment it on video and uploads it, our hero sees it, and wham: he decides that this extraordinary ordinary man is the key to gradually flipping the rural part of the state from Republican to Democrat. All Gary Zimmer has to do is convince Jack to run against incumbent mayor Braun (Brent Sexton), an entrenched Republican. It's an uphill fight. But Gary believes that between his political savvy, piles of money, Democratic campaign operatives, and Jack's angry tortoise energy, they can pull off a miracle.

What ensues is sock puppet theater. Gary and his colleagues speak through Jack, a grumpy widower who lives alone on a farm with his daughter Diana (Mackenzie Davis), and is pretty good about taking direction despite seeing through the city slickers' phoniness. Faith, who flies into town to thwart Gary, is determined to beef up Braun's image and crush Jack beneath piles of Republican cash.

Stewart is sharpest when highlighting the absurdity of all these D.C. manipulators with their data and charts and apps and polls, rumbling through a burg full of laid-off, blue collar people. The pumped-up proxy battle that follows is as superficially absurd as the United Kingdom and Argentina going to war over  the Falkland Islands. The handful of belly-laugh bits in the movie are in a "Daily Show" vein, like the campaign ad that shows Jack firing a heavy machine-gun into a lake, scowling into the camera, and saying, "My name is Jack Hastings, and I endorse this message."

Along the way, there are some suitably mortifying jokes at the expense of Faith, an ice-blooded Nixonian fixer, and Gary, a foul-mouthed, condescending, pampered corporate liberal who finds rural midwestern politeness hilarious. Gary is the kind of guy who orders a "burger and a Bud" at the first pub he enters after arriving in a small town without asking what else is available (he's a haricots verts and red wine person). Gary and his team (which includes Topher Grace as a numbers-cruncher who would marry his spreadsheets if he could, and Natasha Lyonne as a bare-knuckled, ground-level campaigner) are simultaneously contemptuous of, and intimidated by, the "red state" townies. They insult them while trying to court them, and offer "alternatives" to right wing, grievance-driven politicians that amount to defanged or deflated replicas. Like so much in "Irresistible"—including the classic country song "Rhinestone Cowboy," which introduces Jack, a "real American" embellished with Hollywood touches by Gary—the political strategy on the ground is a metaphor for what's been happening nationally in real life for at least three decades, with the Democratic party betting on presidential candidates that are, for the most part—with some immutable ideological exemptions, like abortion rights—essentially "nicer" Republicans.

What ensues is a gently wacky comedy, with a poker-faced sincere streak reminiscent of Frank Capra's dramas (particularly "Meet John Doe," which starred the other Cooper), plus satirical elements in the vein of cockeyed Americana comedies by Preston Sturges ("Hail the Conquering Hero," "The Miracle of Morgan's Creek," "The Great McGinty"). Sturges' movies mocked and punctured America's sentimentalized, "Aw, shucks!" image. But at the same time, they had fun cooking up eccentric characters who showed how Americans embraced their own worst stereotypes, even when their personalities were too complex to be fully contained by them.

It goes without saying that Jon Stewart is no Frank Capra or Preston Sturges, but in the spirit of this film, we might as well say it anyway. "Irresistible" banishes itself to tonal limbo and stays there. It's not punk enough to make us gasp. And it's not skilled enough to massage its cliches to life and make us care about whether, say, Jack will rebel against Gary's increasingly desperate attempts to trade on his war hero/widower/Man of the People vibe; or whether Gary will escape the toxic yin-yang dynamic of his sexual obsession with Faith by hooking up with Diana, an emblem of the pure-hearted American spirit that the major parties always ignore. (Spoiler, but not the bad kind: the 57-year-old does not end up with the 33-year-old Davis.)

Really, though: I suspect "Irresistible" fails to sell the Capra or Sturges elements in its DNA because it's after a more intellectualized target: the prepackaged American political narrative that's been dominant since the '90s, and keeps money flowing into the coffers of the usual suspects.

And presto, change-o, voila! The falsity and simplemindedness of the film turns out to be another way of making its point. Stewart, who hosted "The Daily Show" for 16 years and helped spearhead the 2010 Rally to Restore Sanity and/or Fear (which veered perilously close to enshrining Stewart as the Florence Nightingale of Comedy Central, healing a fractured nation) wants to demonstrate how left-wing/right-wing, red state/blue state, rural/urban labeling makes America's systemic and institutional paralysis worse. The central story of "Irresistible" is not about the mayors or the town. It's about subverting (or asserting) the narrative of Republican dominance over the rural citizens of swing states. And it's about Gary and Faith, who (in a kinda-metaphorical touch, or perhaps just the millionth homage to the marriage of Democratic strategist James Carville and Republican Mary Matalin) are insatiably attracted to each other, and keep almost ending up in bed at night after days spent attacking each another in public.

Is this take sophisticated enough to justify a feature-length, handsomely produced motion picture, anchored by the former star of "The Office" (and previously a "Daily Show" regular)? No. And it's certainly not enough to make us retroactively appreciate Stewart's version of ingenuity, which can be summed up as, "Well, it's supposed to suck, because everything sucks." The story builds to this peak of insight after having us sit through what might as well be a glorified thesis film, made by a trust fund kid who saw "Veep" and a couple of classic old Hollywood comedies and resolved to sally forth and make a statement, despite lacking the showmanship required to entertain the audience until his message could scroll across the screen.

The needle-drop soundtrack of pop classics starts and ends with Bob Seger's "Still the Same," which is like starting and ending a war film with "War (What is it Good For?)" The reprise of "Still the Same" accompanies a shot of a treasury press spewing cash right into your face, a literal as well as figurative money shot. Bryce Dessner's score has three modes: 1. "Sinister financial and political shenanigans, watch out!"'; 2. "iPhone ad where a little girl teaches grandma how to download an app"; and 3. "Charlie Brown gets his biopsy results." But it's intrusive and bad on purpose, you see. Because politics is all manipulation, you see. It's all a lie, a story, you see, he typed, as Charlie Brown's corpse rolled towards the furnace. Why are things still the same? Well, this is why. Poor Charlie Brown.

More devastating than the film's tactically half-assed storytelling is its numbed and heavy-lidded world view. "Irresistible" accepts as nigh-indestructible that which America itself shows signs—at long last, and collectively!—of wishing to dismantle and revise. At the moment this review was being written, Americans were growing more politically energized, outraged, at times destructively furious, expressing a volatility not seen since the paroxysms of the 1960s. Regardless of whether you think one cause or person is right or wrong, you can't say no one cares.

Yes, of course, it's just a fluke of timing that "Irresistible," a long sigh of a picture, is being released at the exact moment when the country seems to be awakening from a four-year lucid nightmare and realizing that the terrifying shape that had them cowering behind the covers was just a cheap suit on a coatrack. And yes, of course, this window of opportunity could still slam shut. After World War II, Americans seemed to slowly lose their patience and willpower, along with their tolerance for real sacrifice, or even sustained inconvenience. That's why, when the Center for Disease Control suggests wearing a mask in public to prevent the spread of a new and potentially deadly virus, a third of the electorate reacts as if they'd been commanded to gouge their eyes out with KFC sporks.

But still! Even if "Irresistible" were released a year ago, when its face-down-on-the-bar, abandon-all-hope vibe would've made more sense, it would still be entering a pop culture landscape in which "Sorry to Bother You" and "The Death of Stalin" existed, and it would seem imaginatively as well as politically bereft in comparison.

To the best of my knowledge, in the entire history of cinema, no one has used "It's supposed to suck!" as a blurb in a trailer. I grant the filmmmakers permission. I endorse this message. 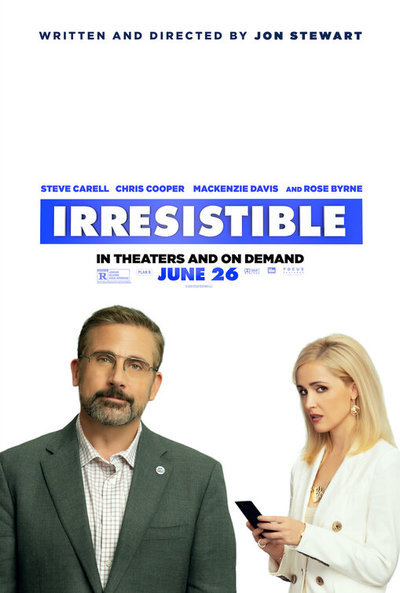 Will Sasso as Big Mike