This is the latest film from Guillaume Nicloux, who recently made “The Kidnapping of Michel Houellebecq,” in which the French literary former enfant terrible played himself in a fictional scenario. Initially, “Valley of Love” also seems occupied with meta activities; the lead actors play characters named “Gérard” and “Isabelle.” But—and it’s a substantial "but"—their characters are a former married couple, one with an adult son that committed suicide. That’s not true of Huppert and Depardieu, despite the fact that their characters, meeting in the USA's own Death Valley after years of estrangement, are also film performers. Depardieu’s jape of honoring a pesky American’s autograph request by signing “Bob De Niro” leads to some interesting discomfort for him. Obviously, Nicloux got these performers back together to extrapolate on, or perhaps exploit, their iconography, but he’s up to quite a bit more than that.

The dead son has, in separate but very nearly verbatim letters, asked Gérard and Isabelle to meet for seven days at Death Valley’s park; at the end of their stay, he promises, he will appear to them. Gérard has acquiesced reluctantly; he’s got health issues weighing on his mind. (While Huppert, now over 60, still looks sensational, the sight of the gargantuan Depardieu with his shirt off, suntan or not, somehow brings to mind Fredric Forrest’s “Apocalypse Now” monologue about the boiled sides of beef.) Isabelle believes that the manifestation will occur, and implores Gerard to stay and have faith. And that’s the film’s operating mechanism; the rest of “Valley of Love” consists of the performers/characters’ sometimes pained, sometimes wryly funny interactions. Both Gérard and Isabelle deal with forms of individual anxiety (this being a European art film, the scene in which one of them vomits feels a little pro forma), and Nicloux throws in more intimations of the supernatural as the promised day draws closer. The Death Valley vistas are often spectacular, the melancholic, dissonant music of Charles Ives is aptly used, and Depardieu and Huppert resonate mightily even when they’re not up to much. It’s a little jarring to see these two one-time emblems of rebellion in the roles of aged parents who just didn’t understand, but of course that’s part of the film’s point. Youthful impudence is a great and sometimes useful thing, but it is, alas, practically unsustainable, which is something we never quite get while we’re exercising it. These characters, and the actors playing them, get it very, very well. It’s in the way that Depardieu and Huppert can convey an aspect of phenomenological rue that gives this sometimes muddled movie its ultimate value. 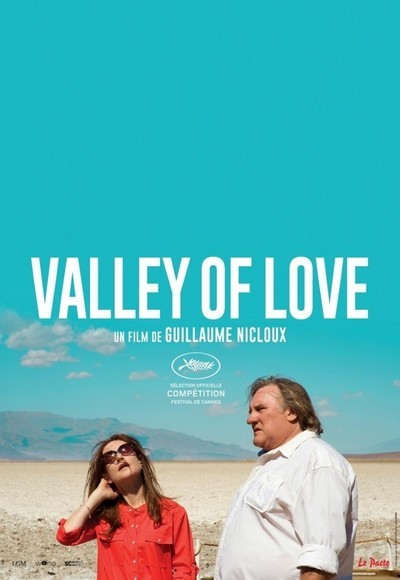