The Kidnapping of Michel Houllebecq

“He’s as ugly as sin—literally!” A high-school teacher of mine once made that clever observation with respect to the French philosopher Jean-Paul Sartre, and it came to mind as I gazed upon the controversial contemporary French writer Michel Houellebecq playing himself in the 2014 film “The Kidnapping of Michel Houellebecq.” Sitting in his kitchen consulting a designer about a renovation (he is a writer of sufficient market power that he can re-do his apartment), wearing a ridiculous blue-striped v-neck shirt, weakly holding a cigarette, and tilting his misshapen strawberry head, a relaxed expression on his seemingly always scrunched-up face, Houellebecq, whose novelistic output has been sufficiently incendiary to compel him to spend several years off the Continent, has an air both repellent and possibly innocuous. A brand of anti-charisma, if you will.

This movie, written and directed by Guillame Nicloux (himself a novelist as well as a filmmaker) was inspired by an AWOL-type period in Houellebecq’s actual life, in the year 2011, during which he was reputed to have been abducted. The author himself has declined to confirm his abduction, but it wouldn’t be the only excitation in his biography, given that he’s been tried in his home country for inciting racial hatred and such. While this movie doesn’t strive to portray the Houellebecq With A Song In His Heart, it does show the author as a man of small, tetchy multitudes; one minute he’s nervously declining a cab ride upon discovering the driver appears to be North African (although is that the real reason? We never really know); the next he’s gently embracing and bantering with a friend who’s a woman of color. Combined with his low-key affect, these vignettes convince us that even literary provocateurs have ordinary lives.

But Houellebecq’s ordinary life will soon be rocked by three knucklehead bros, one of whom has been set off by, of all things, one of the author’s earliest works, a study of American horror writer H.P. Lovecraft. The fellows—one fat, the other two trim, one of those a mixed martial arts maven—abduct the writer at his own flat, and carry the tiny fellow out in a small steel cabinet. They bring him out to their ancestral home out in the provinces—the kind of staid but seething-with-ennui setting in which Maurice Pialat might set a film.

“I haven’t smoked in ages,” Houellebecq lies to his captors as they acclimate him to his new surroundings while trying to convince him that they’re working for a mastermind—they don’t even really have much of an idea of how to demand a ransom, or from whom, as it turns out. The aforementioned anti-charisma is, alchemically, wielded by Houellebecq as a way of wheedling favors out of his captors. Soon enough, the author is dining with them, drinking with them, debating the sexual orientation of J.R.R. Tolkien with them. He also gets the opportunity to elaborate on some of his more volatile positions, particularly Europe and its history, as for instance when he holds forth as to why Poland is really only “half a country” if at all. The fiction of the film has the effect of illuminating Houellebecq while also, in a sense, diminishing him: here he is not a widely translated and frequently published author propagating Highly Objectionable Stances, but just some old dude saying some unusual stuff. So, okay then.

“Fragile guy,” one of the hapless criminals observes of Houllebecq when they first snag him, but while he’s not physically imposing, he nevertheless proves a formidable and perverse social chess player, particularly when he convinces the lady of the house to procure a prostitute for him! That character, named Fatima, provides the most bleakly Pialat-esque note to the film; “she does other odd jobs,” someone observes of her status in town. The existential trap implied by the character gives the movie’s odd final scene a particularly apt resonance.

The main caveat I have is that this isn’t a film that’s going to mean a whole lot to a viewer who’s never heard of Houllebecq, who’s indeed pretty well known in the States but not as the cultural fixture he is in France. A lot of the film’s most potent jokes are also very Francophilic, as when Houllebecq complains that all the books in the house where he’s held are by Alain Minc. (I had to look him up myself, to be honest.) And even those with The Knowledge might be put off by the movie’s discursive, loose, dry style. I dug it myself, and Nicloux is a very confident practitioner of the mode. Let’s just say that this is pretty much the opposite of a contemporary American comedy: rather than broad, “The Kidnapping of Michel Houllebecq” is an exemplary example of narrow. 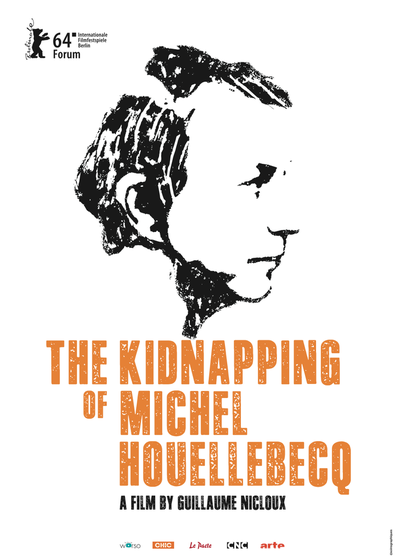 The Kidnapping of Michel Houellebecq (2015)