Jamie Dornan laying all his love—or at least all the love he can muster—on Jemima Kirke while drunkenly drawling … is that … why yes it is, it IS “Danny Boy” is one kind of confrontational movie opening to be sure. In the couple’s post-coital relaxation mode, his character, a wildly successful new author named Nick, says to Kirke’s, a long-ago published author named Andrea, “You’re not gonna get obsessed with me, are you?”

Obsessed? With a guy who sings “Danny Boy” during sex? I never heard of such a thing. No, I mean I never even have. For all that, Andrea, who has pink hair and a mouth not unlike that of Jessa, the character Kirke played on “Girls,” gets strangely attached to the literary enfant, who’s written a memoir of tragic love he experienced as a volunteer medico in Gaza.

In the meantime, elsewhere in the hills of L.A., Andrea’s sister, Tara, played by Lola Kirke, Jemima’s real-life sibling, is fellating her older partner Martin (Ben Mendelsohn), who’s having trouble concentrating because he can’t stop looking at the cat on the dresser that’s persistently licking its own genitals. Emma Forrest’s debut feature as writer/director here plays like an episode of “You’re The Worst” directed by John Waters.

As the movie goes on, it’s clear that Forrest is going more for something in the line of a Robert Altman vibe of L.A. anomie. Andrea is experiencing the banality of recovery and fears that it’s doused her creative spark. Martin wants to revive his creative spark with a return to grunge rock. Nick preens in a self-satisfied fashion while sitting on a catastrophic secret. And Tara, feeling disconnected from something, pursues studies and more with a soulful even-older-than-Martin rabbi who’s actually led a purpose-driven life—Civil Rights movement and everything. This character is played by Billy Crystal and don’t laugh—he’s perfect.

The movie never seems to even circle anything resembling a storyline until Alice Eve’s literary agent tells Nick she’s got the goods on him. Before that, movie is a character study of mostly very brittle people. If you’re not impressed by their meant-to-be-coruscating qualities, “Untogether” will largely seem an exercise in exasperation. Despite being well shot, confidently written, and acted with a surfeit of commitment by most of its cast (Mendelsohn, who not for the first time reminded me uncomfortably of Trivago pitchman Tim Williams, is director Forrest’s ex-husband), I found the world it presented both smugly insular and overfamiliar. And Dornan, in a key role, fails to work up much intrigue. In an early scene Eve’s character floats George Clooney to play the lead role in a movie version of the memoir, and Dornan’s Nick says Clooney looks like a “dirty uncle.” One can only respond, to both the actor and his character, “You wish.” 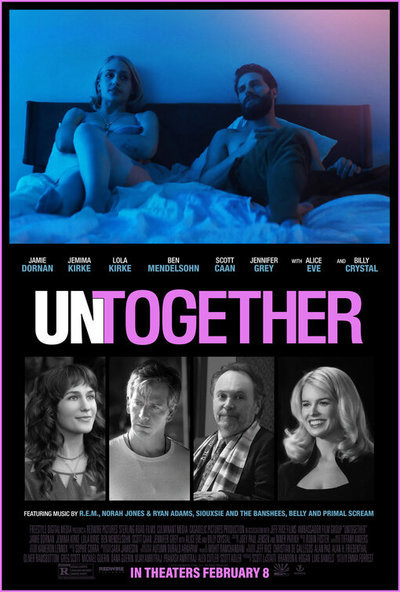