If “Unlocked” had just been an ordinary piece of direct-to-video action fodder—the kind of film directed by some anonymous hack and featuring a cast consisting of one or two past-their-prime stars, a starlet or two of no particular distinction and either a wrestler or a rapper—I might have felt a little more forgiving towards it. (Of course, I probably would not have actually seen it under those circumstances, but never mind.) However, this is a film that contains a basic, promising concept, an undeniably talented director and a cast filled with enough familiar faces to stock at least a second-tier Steven Soderbergh joint, led by the enormously charismatic force of nature that is Noomi Rapace. And yet, despite all of those advantages, the end result is a movie so resolutely bland and forgettable that the cast and crew probably expended more sheer effort dragging themselves to the set every day than they did in staging all of the various chases and shootouts and whatnot.

Rapace plays Alice Racine, a brilliant CIA operative who hasn’t worked in the field since she was unable to prevent a terrorist attack in Paris in 2012. Currently in London as an undercover agent in the guise of a social worker, Alice refuses entreaties from her former mentor (Michael Douglas) to return to the fold, but soon finds herself pulled back in when the agency asks for her help with an important case involving a potential attack on London by an ISIS cell. A courier with key information has been captured en route to deliver a key message and she is asked to get it out of him. Getting the information is easy enough but Alice soon begins to sense that the situation is not quite as it seems. Indeed, her intuitions are correct, and she manages to escape in the nick of time along with the coveted information.

On the run and unsure of who she can trust anymore, Alice runs into plenty of people along the way to arouse her suspicions. Besides the mentor, there is the local CIA bureau chief (John Malkovich), who professes to believe her story but nevertheless deems her behavior to be highly suspicious at best. There is her main MI5 contact (Toni Collette), who may or may not know more than she is letting on. Most bizarrely, there is a cat burglar (Orlando Bloom) that she meets when she catches him robbing a safe house where she is intending to hide out and who is revealed to possess the kind of advanced skill set not often seen in guys who boost TVs for a living. About the only person that she can actually put her trust in is Amjad (Tosin Cole), a local who has been giving her information on suspicious neighbors and who seems to have what it takes to make it as an agent himself.

What could have made for a reasonably entertaining potboiler turns out to be a surprisingly boring experience thanks to the profoundly uninteresting screenplay by Peter O’Brien, the kind of by-the-numbers enterprise that is constantly trying to pull the rug out from under the feet of viewers but never seems to realize that they have already pretty much sussed out all the allegedly surprising twists and turns. Director Michael Apted has shown his talents in the past in films ranging from straightforward entertainments like “Coal Miner’s Daughter” and “Gorky Park” to the landmark “Up” documentary series but he mostly fails to give the film the kind of stylistic spark that would have helped it to transcend the mundane material. The only time it really comes alive is during the genuinely impressive set piece involving her escaping the suspicious interrogation, a neat sequence that puts the more elaborate action scenes on display to shame.

Other than that, the best thing about the film by far is Noomi Rapace, who obviously came to play and winds up displaying more energy, focus and charisma than the otherwise generic proceedings know how to handle. Her co-stars, on the other hand, are all pretty much coasting here with widely varied results. Malkovich is in full ham mode and manages to liven things up a bit during his brief appearances. Douglas, on the other hand, just walks through his part, perhaps realizing that the moment that his character is introduced, most viewers will be able to figure out what is up with him based solely on the fact that he was cast in the part. Collette is pretty much wasted throughout, though she does get one moment to shine when she takes a machine gun to some opponents with a certain degree of panache. As for Orlando Bloom, he has been saddled with a character that, as written, is all but impossible to play in a convincing manner and never manages to come across as anything other than wildly implausible.

Neither good enough to justify the talents on display nor bad enough to at least make it perversely memorable, “Unlocked” is a film as nondescript as its title—the kind that one might have on in the background while unpacking a suitcase in a motel room with a substandard cable package. It is clear that all involved were hoping to kick off a new action franchise with this film but the tepidness of this effort all but ensures that we will not be seeing the further adventures of Alice Racine anytime soon. On the bright side, this leaves Rapace free to hopefully someday be at the center of a different series that is more deserving of her talents than this aggressively “meh” effort. 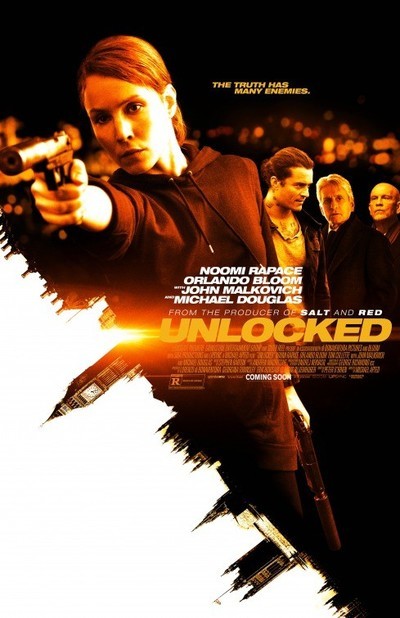