Tyler Perry's "Madea" franchise, based on his popular one-man shows, is an unstoppable juggernaut with a built-in audience. It features the adventures and mishaps of one "Aunt Madea", played by Perry himself in drag. Madea is a road-of-least-resistance truth-talking loud-mouthed granny enveloped in gigantic muumuus and surrounded by dimwit members of her own family who either cower in fear of her, or underestimate her ability to cut through their malarkey. She is a living Ms. Malaprop of Perry's alternate universe, spouting homespun grammatically incorrect wisdom, and if you can't stand being in her presence then the Madea movies will be a nightmare. I happen to find the schtick rather funny, especially when her eyes go dead and flat at the same time that she laughingly bull dozes her way into the heart of a situation. She has no illusions about anyone. Please. Those died a long time ago. But the surrounding schtick of the movies? There we run into problems. It's heavy with unvarnished propaganda, and trucks in broad stereotypes and manipulative pulling of the heart strings. So it's a mixed and annoying bag, and "A Madea Christmas" is no different.

The story told here is both simple and mind-bendingly complex. First, there's the opening scene with Madea dressed up in a Santa suit, being roped into working at an upscale department store by her niece Eileen (Anna Maria Horsford), who appears to be a straight-up sociopath. Things do not go well, when Madea straight-talks a poor plump woman who wants to buy some lingerie and also takes personal phone calls while standing at her station. Madea is fired, and she storms out of the store huffing and puffing. Meanwhile, exposition is thrown at us in messy splotches. Eileen is upset that her daughter Lacey, who has moved to a small town in Alabama to teach at an elementary school, is not coming home for Christmas. Eileen wants to go surprise her for Christmas, but there is the small problem that Eileen does not drive. Lucky for Eileen, Lacey (Tika Sumpter) is deeply embroiled in her own plot-heavy situation, involving a thwarted Christmas Jubilee (no funds!), and an encounter with a yearning ex-boyfriend (JR Lemon) who just happens to work for a big corporation which is looking to sponsor just such an event, and they are ready to hand over an appalling $100,000 to the school. He, in the hopes that he can spark up his old romance with Lacey, decides to drive down to Alabama with the contract in person, and so Eileen and Madea hitch a ride.

You got all that?

But there are more plot twists. Lacey has secretly eloped with a white man named Conner (Eric Lively), and he is the main reason Lacey does not want to come home for Christmas. Her mother, as Lacey tells Conner, has a bad heart and all these dreams for her daughter and marrying a white man is not part of the plan and her mother very well may have a heart attack upon hearing the news. Unfortunately, Conner's parents are also visiting for Christmas (they are played, entertainingly, by Larry the Cable Guy and Kathy Najimy, upping the weird factor considerably), and the two cars holding the in-laws-unknown-to-one-another arrive at Lacey and Conner's house within minutes of one another. Lacey, trapped in her web of lies, ropes in her new in-laws to keep up the facade that Conner is just a hired man until she can figure out a way to break the bad news to Mom.

Hijinx ensue. Mom, as I mentioned, is a sociopath and is rude to the white folks, wondering what the hell they are doing hanging around her daughter's house. Madea stalks around, sizing up the entire situation, and barking inappropriate comments in mixed company about farts and sexual encounters. Conner's mom and pop are hillbillies out of the "Deliverance" playbook, bearing possum pie and moonshine, and a ribald sex life which they are not afraid to discuss in public, mortifying everyone (except Madea, who is delighted). Lacey's mom is the biggest racist in the film (and that's saying a lot seeing as there is one scene where Madea stumbles into an actual Ku Klux Klan meeting), and refuses to treat the white people in her midst with even the barest bones of politeness. Larry the Cable Guy and Madea get along like a house afire, which is one of the more bizarre elements of the film, ripe with comedic possibilities, some of which actually come to fruition. The two of them stand out in the pig-sty on a cold winter morning discussing racial politics and commonsense matters of the heart, wondering why everyone in the world can't be as discerning as they are.

But there's more! And here's where Perry heaps on the propaganda with a shovel loaned to him by Fox News. The sponsorship of the Christmas Jubilee is contingent upon the Jubilee being renamed the "Holiday Jubilee". The $100,000 will be rescinded pronto if a nativity is allowed on the premises. The townspeople are up in arms, and then, of course, it is revealed that the corporation in question is the one funding the dam upriver which has put all of the farmers out of work. Lacey is summarily fired. Her boss, played by Lisa Whelchel (the iconic Blair from "Facts of Life"), is devastated, but what can one person do against so many? And it's just not right to keep "Christ" out of "Christmas" anyway, that's for damn sure. You know you're through the looking-glass when the War on Christmas is treated not only like a real thing as opposed to a ridiculous bogey-man created by those with cultural axes to grind, but THE thing that bonds all of these different types of people together. On the one hand, it's outrageous and stupid. On the other hand, the schmaltz in individual moments of sentiment have an undeniable pull, as most schmaltz does. That's the way it was designed. So I feel manipulated, and then think, "Oh, hell, whatever, I don't care." It's an odd experience, not altogether pleasant, but interesting nonetheless.

The subplots proliferate. A sweet young student of Lacey's (Noah Urrea) has a beautiful voice and yet is afraid to sing in the Christmas Jubilee because he is bullied by his classmates for being "just a dirty farm boy". His father (Chad Michael Murray) is one of the angry farmers in the town, and also, it turns out, was a bully himself as a young boy who tormented Conner mercilessly in school. What goes around comes around. Will the spirit of Christmas melt his heart? Will the spirit of Christmas make Mom stop being such a pain-in-the-ass? And, most importantly, will a nativity be allowed at the Christmas Jubilee?

The film is chopped up episodically, with Christmas clip-art of bells and snowflakes wiping across the screen leaving a trail of glitter, cheap-looking and silly, and the whole thing feels thrown together in a hilarious weekend. Even with the poor editing and somewhat lazy filmmaking, and the strange details which caught my eye when I had to check out of the plot to save my sanity (why does Lacey dress for her job teaching fourth graders as though she is going out clubbing?), when Madea is onscreen, at least you know what universe you are in, and there is something interesting and insane to watch. Otherwise, you are thrust into an abyss of meaninglessness and plot-heavy maneuvering overlaid with Christian propaganda that wears out its welcome with the first line of exposition. 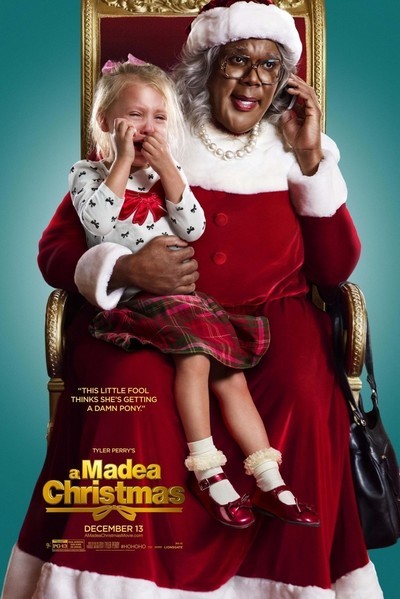 Larry the Cable Guy as Buddy